Princess Margaret, the younger daughter of King George VI and Lady Elizabeth Bowes-Lyon was born on 21st August 1930 at Glamis Castle in Angus, Scotland, the family seat of her maternal grandfather, Claude Bowes-Lyon, 14th Earl of Strathmore. She was christened with the names Margaret Rose by Cosmo Gordon Lang, Archbishop of Canterbury at the Private Chapel of Buckingham Palace on 30 October 1930. 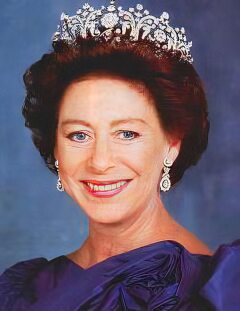 The princess was educated with her elder sister Elizabeth, in the traditional royal manner, by a governess, Marion Crawford known to the children as "Crawfie". Miss Crawford later wrote a book on the subject entitled 'The Little Princesses', which resulted in her being ostracized by the Royal family.

Her father Albert, Duke of York, the second son of George V and Queen Mary, unexpectedly ascended the throne in 1936, on the abdication of her uncle Edward VIII to marry American divorcee Wallis Warfield-Simpson. The family, which her father liked to refer to as 'the firm' moved to Buckingham Palace. During the Second World War, Margaret and her sister Elizabeth were evacuated to the greater safety of Windsor Castle.

George VI died in his sleep at Sandringham, of lung cancer in 1952, when Margaret's elder sister ascended the throne as Elizabeth II.

Early in the new reign, Margaret's relationship with her father's equerry, R.A. F. pilot and Battle of Britain hero, Group Captain Peter Townsend, became public knowledge and the pair expressed a wish to marry. Group Captain Townsend was a divorcé, which, made him unacceptable in the eyes of the Church of England, of which her sister was head. The Princess was advised that if she went ahead with the marriage, she would be obliged to give up her royal title, her place in the line of succession and her Civil List allowance. After consultations with the Archbishop of Canterbury, the Princess decided she would not marry Group Captain Townsend.

The Princess married Antony Charles Robert Armstrong-Jones, the photographer son of Ronald Owen Lloyd Armstrong-Jones and his first wife, Anne Messel, later Countess of Rosse, on 6 May 1960 at Westminster Abbey. The ceremony was the first televised royal wedding. The Queen created her sister's husband Earl of Snowdon, in honour of his Welsh descent. The couple moved into Apartment 10, Kensington Palace before moving to Apartment 1A in early 1963 where they made their family home. The marriage produced two children:-

The marriage proved to be a difficult and stormy one, leading to Margaret and Snowdon becoming estranged. Margaret indulged in a series of affairs that were reported in the media and led to the marriage ending in divorce on 11 May 1978. Lord Snowdon remarried to Lucy Davies, former wife of film director Michael Lindsay-Hogg, in 1978, by whom he had a second daughter, Frances Armstrong-Jones. Princess Margaret never remarried.

The Princesses health began to deteriorate in the 1990s. In common with her father, George VI, she was a heavy smoker. She suffered the first of a series of strokes in 1998, while on holiday in Mustique. This was followed by further strokes in 2000 and 2001. Her last public appearances were made in a wheelchair.

Princess Margaret died at the King Edward VII Hospital for Officers at the age of 71, following a severe stroke on 9th February 2002, her children Viscount Linley and Lady Sarah Catto were by her side. Her funeral was held on the 50th anniversary of her father's funeral. Princess Margaret had expressed a wish to be cremated, her ashes, at her request, were placed in the tomb of her father, King George VI in the King George VI Memorial Chapel in St. George's Chapel at Windsor Castle.