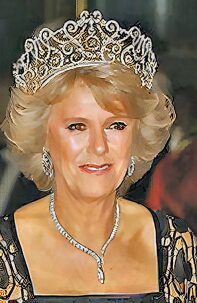 The family includes a brother, Mark and a sister, Annabell. Camilla is the great-granddaughter of Edward VII's mistress, Alice Keppel. An earlier ancestor, Thomas Cubitt (1788-1855), the son of a Norfolk farmer, built London's Mayfair, Bloomsbury, Eaton Square, and Belgravia in the second quarter of the nineteenth century. Camilla also has a royal descent, from Charles Lennox, Duke of Richmond, the illegitimate son of Charles II and his French mistress, Louise de Kerouaille. The genealogist William Addams Reitweisner describes the Duchess of Cornwall's ancestry as 'French, English, Dutch and Scottish'.

The young Camilla Shand was educated at Dumbrells School in Sussex and Queen's Gate School, Kensington. She completed her education at a Swiss finishing school, Mon Fertile. She is remembered as being an extrovert and forthright pupil with an earthy sense of humour.

The relationship between Prince Charles and the then Camilla Shand, began in 1971 when she was 23. They first met at a polo match at Windsor Great Park and continued to see each other for some time, growing very close. When Charles, who was then serving in the navy, characteristically dithered and failed to propose, Camilla met and married Andrew Parker-Bowles, an army officer, by whom she had two children, a son Tom, who was born in 1974 and is Prince Charles god-son and daughter Laura Rose, was born in 1978.

They remained in contact and her relationship with Charles was resumed after her marriage, Lady Diana Spencer was later to suspect that they were still intimate during the time Charles conducted his courtship of her. They again became romantically involved after Charles 1981 marriage, probably in the early 1980's, after the birth of Prince Harry, when the relationship of Charles and Diana began to seriously deteriorate.

Diana, Princess of Wales publicly blamed Mrs. Parker-Bowles for the breakdown of her marriage to Prince Charles in Andrew Morton's best selling book 'Diana, Her True Story', which discussed at length the Princess' unhappiness at the affair, her rampant bulemia and suicide attempts. The launch of the book and the revelations it contained about the state of the royal marriage caused a sensation and did much to damage her spouse's reputation. Immediately after, Camilla suffered the ignominy of being pelted with bread rolls by outraged housewives during a trip to the supermarket. Although he was publicly supportive when the revelations of her long affair with Prince Charles emerged, Camilla's marriage to Andrew Parker-Bowles consequently ended in divorce on 3 March, 1995. 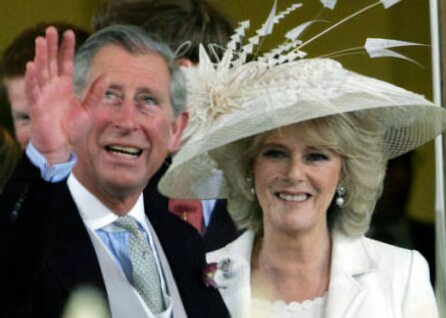 Following the tragic death of the popular Princess Diana in a Paris car crash in 1997, Camilla was advised to keep a low profile but gradually began to emerge into the public eye to accompany Charles to charity events.

After a period of cohabitation, the Prince of Wales and Camilla Parker-Bowles were married in a civil ceremony at the Guildhall, Windsor, on 9th April 2005. The Queen and Prince Phillip did not attend the service, which was perceived by the media as a snub to Charles and Camilla, although Charles' sons, Princes William and Harry did, along with Charles' siblings and other members of the royal family.

The bride wore an elegant oyster silk suit and a matching hat with feathers. The civil ceremony was followed by a service of religious prayer and dedication at historic St. George's Chapel, Windsor Castle, which the Queen and the Duke of Edinburgh did attend. For the ceremony at St. George's Chapel, Camilla wore a striking long porcelain blue dress and matching coat, embroidered in gold thread and an eye-catching headdress of gold leaved feathers.

Camilla became a grandmother on 9th October 2007, when the wife of her son Tom Parker-Bowles, the former Sara Buys, gave birth to a daughter, named Lola Rosalind at Queen Charlotte's Hospital in Hammersmith. Lola Parker-Bowles was christened at the Chapel Royal at St James's Palace. A second grandchild arrived on 16th January 2008, when the daughter Laura, who is married to Harry Lopes, (grandson of the 2nd Baron Roborough and the 2nd Baron Astor of Hever) gave birth to a daughter, Eliza Lopes. The Duchess of Cornwall is said to dote on these children.