The posthumous son of Geoffrey, Duke of Brittany, (fourth son of Henry II and Eleanor of Aquitaine) and his wife Constance of Brittany (daughter and heiress of Conan IV of Brittany and Margaret of Huntingdon), Arthur of Brittany was born on 29th March 1187 at Nantes. 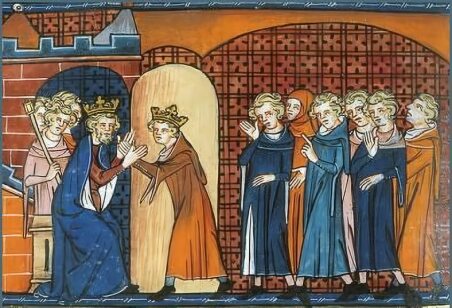 Arthur had an older sibling, Eleanor, known as the 'Fair Maid of Brittany', who had been born around 1184, another sister, Matilda or Maud, born in 1185 had died in infancy. Arthur's father Geoffrey, who was both reckless and scheming, had been killed at a tournament in Paris on August 19th, 1186, at the age of twenty-eight, reputed to have been trampled to death in the melee. The child's grandfather, Henry II had expressed a wish for the baby to be christened Henry, but the name Arthur, with its apparent mythical connotations to the legendary Celtic king, was chosen to appeal to his Breton subjects.

A second marriage was arranged for Constance of Brittany in 1188, by Henry II, to Ranulph de Meschines, 4th Earl of Chester, but proved to be highly unsatisfactory, Ranulph imprisoned his wife in 1196, leading to an uprising in her favour in Brittany. She was released in 1198 and the marriage was annulled. Constance was married for a third time to Guy of Thouars, the marriage produced twin daughters, Alix (circa 1201-1221) and Katherine of Thouars (circa 1201-1240).

Having no legitimate child of his own, Arthur's paternal uncle, Richard I the Lionheart, designated him as heir to England and the Angevin Empire in a will drawn up prior to his embarking on the Third Crusade but when Richard died at the Siege of Chaluz in 1199 the throne was seized by John, the youngest of Henry II's and Eleanor of Aquitaine's large brood of sons.

John was visiting Constance and Arthur in Brittany when news of the Richard's death was related to them. He made haste to seize the royal treasury at Chinon Castle, Constance raised an army, and took Angers. Although, with the support of his mother and William Marshal, John was accepted in England, the King of France, Phillip Augustus and the French nobility refused to accept John, preferring Arthur who declared himself a vassal of Philip. Phillip himself was eager to play on the rifts in the Plantagenet family to further his own ends of increasing the power of the French crown by regaining the Plantagenet lands. John reacted by launching an invasion of France in 1202.

Arthur's most staunch supporter, his mother, Constance, had died in 1201 at Nantes of uncertain causes, but believed to be either complication resulting from childbirth or leprosy. She was buried at Villeneuve Abbey in Nantes

On 31st July, 1202, Arthur besieged his octogenarian grandmother, Eleanor of Aquitaine, at Mirebeau Castle. Eleanor resorted to delaying tactics while sending an urgent message to her son John to come to her aid, he covered the eighty miles from Le Mans in 48 hours, Arthur, taken surprise by the uncharacteristic speed of John's advance was captured by his uncle along with his allies and imprisoned at Falaise Castle, in Normandy. His elder sister, Eleanor was also taken and imprisoned at Corfe Castle, Dorset, where she remained for the rest of her life. She died in 1241, the prisoner of John's son, Henry III and was buried at Amesbury Abbey in Wiltshire. 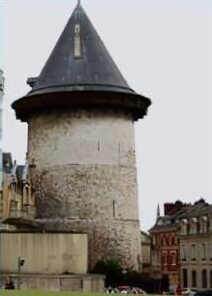 Arthur was later transferred to Rouen, where he was placed under the charge of William de Braose. He mysteriously disappeared in April 1203. Rumours abounded at the time regarding Arthur's disappearance and assumed death, the one given most credence is that John being "much troubled" issued orders for Arthur's jailers to blind and castrate him, which they did not carry out. 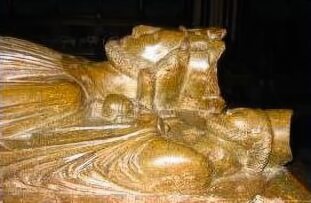 John was advised by his mother, Eleanor of Aquitaine, to make peace with Arthur. At a later meeting at Rouen Castle with his fiery-tempered uncle, who was none the better for the drink, Arthur had adopted a haughty and defiant attitude, at which John became enraged, and killed his nephew with his own hands, later depositing the body, weighed down with stones, in the River Seine. The legend goes on to state that Arthur's body was later buried at the priory of Bec called Notre Dame de Pres. The Margam Annals, written in the thirteenth century at a Cistercian monastery in Wales records an account of Arthur's death:-

' After King John had captured Arthur and kept him alive in prison for some time, at length, in the castle of Rouen, after dinner on Thursday before Easter, when he was drunk and possessed by the devil ['ebrius et daemonio plenus'], he slew him with his own hand and tying a heavy stone to the body cast it into the Seine.' To add weight to the rumours, William de Braose later rose high in John's favour and received lands in the Welsh Marches. Years later his wife Maud de Braose directly accused King John of the the murder of Arthur. John accordingly imprisoned her and her eldest son, William and cruelly starved them to death in Windsor Castle. William de Braose himself escaped to the safety of France.

The murder of his young nephew would be remembered as the greatest of John's many misdeeds. It resulted in the French nobles uniting in opposition to him. Chateau Gaillard, Richard I's impregnable castle, eventually fell to the French, followed by the rest of Normandy. John, his resources exhausted, was forced to flee the smoking rubble of his father's great French Empire.

The dukedom of Brittany eventually passed to Arthur's half-sister, Alix of Thouars, who married Peter de Dreux, the first Breton ruler of the House of Dreux.