The place of Simon de Montfort in history has been large, mainly since his actions made an important contribution to the history of Parliament.

Simon was born circa 1208, a younger son of the French nobleman Simon de Montfort and his wife Alix de Montmorency. His paternal grandmother, Amicia de Beaumont, was the senior co-heiress of her brother Robert de Beaumont, 3rd Earl of Leicester. The elder de Montfort had led a crusade against the heretics in Toulouse. 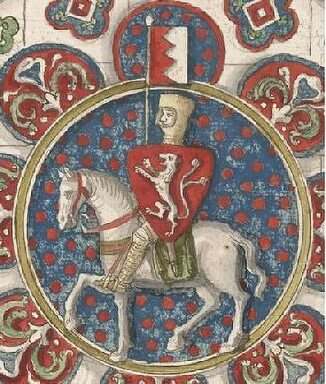 On the loss of the Duchy of Normandy, King John granted the Leicester estates and title to Simon's father's cousin Ranulf, Earl of Chester. De Montfort's eldest son Amaury attempted to regain the earldom but finally agreed to allow his younger brother Simon to claim it in return for all family possessions in France. Simon arrived in England in 1229, the new king, Henry III, although sympathetic, was not in a position to confront the powerful earl of Chester, Simon approached the the Earl himself, since he was childless, Ranulf agreed him to cede the earldom to his kinsman.

Simon married Eleanor, the widowed sister of Henry III, on 7 January 1238 at the King's Chapel in Westminster Palace, without gaining the consent of the king's council. Eleanor had been previously married, at the age of nine, to William Marshal son of William Marshal Earl of Pembroke. The incompetence, tyranny and pathological irresolution in the government of Henry III determined the barons not to lose the benefits of the Magna Carta which had been secured by their ancestors. Simon became the leader of baronial opposition to Henry which resulted in civil war. De Montfort was preparing to join the crusade of Louis IX of France, when in 1248, King Henry asked him to pacify Gascony, there Simon made enemies which resulted in him being put on trial in 1252. His relationship with his irresolute brother-in-law the king now strained, Simon owed large sums of money to Thomas II of Savoy, and named the King as his security, an action which succeeded in infuriating Henry. Simon fled to France and later participated in a crusade to the Holy Land.

On his return to England, Simon emerged as the leader of the barons opposing Henry's foreign favourites at court. In 1258 the baron's party drew up Provisions at Oxford to subject the king to a council and a 'Parliament' (from the Old French parliament meaning, speaking, a conference) consisting of fifteen and twelve barons each.

In 1260 Simon held a parliament, at which he transacted business contrary to the orders of Henry, the king regained power and Simon was obliged to return temporarily to France. He returned in 1263 and declared war on his enemies, arresting the Savoyard Bishop of Hereford inside his cathedral, Henry and his family were forced to seek refuge from rioting Londoners in the Tower of London. With the aid of his eldest son, known as Lord Edward (later Edward I) Henry re-asserted himself and Simon was obliged to accept the arbitration of Louis IX of France, by the Mise of Amiens of 1264 Louis cancelled the Provisions of Oxford. Simon refused to accept the decision stating 'I have been in many lands and nowhere have I found men so faithless as in England, but, though all forsake me I and my four sons will stand for the just cause.' In this, he had the support of Gilbert de Clare, Earl of Gloucester, the Franciscans and Oxford students. 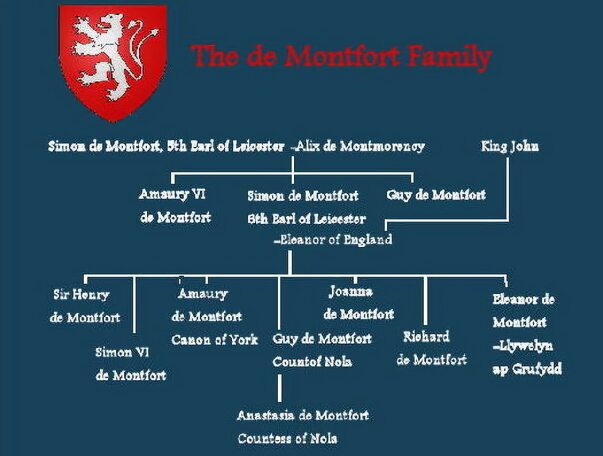 The ensueing civil war reached a climax at the Battle of Lewes fought on 14 May 1264, where Simon's forces wore White Crosses like crusaders. The King, Lord Edward, and Richard Earl of Cornwall, Henry's brother were all captured and Henry was forced to accept Simon's terms in the Mise of Lewes. In 1265 Simon called a parliament which included two citizens from every borough in addition to the usual clegy, barons and knights. His rule however was imperilled by a quarrel with the young Gilbert de Clare which led to a renewal of the war in May, 1265.

Lord Edward managed to escape from his captivity when on the pretext of going hunting, he outdistanced his captors and reached Wigmore Castle, where he was joined by Simon's 's chief ally Thomas de Clare, Gilbert de Clare and others. Simon summoned the help of his son Simon from Sussex, the young Simon and his forces stopped to rest on 2 August at the priory of Kenilworth, when a spy ushered in Lord Edward and de Clare to surprise them, Edward took many prisoners.

On 3 August Simon reached Evesham to be told the bad news, aware he would be surrounded, he held the captive Henry III amongst his ranks and on the morning of 4 August, the two hostile brothers-in-law heard mass together. At dawn, lookouts placed in the tower of Evesham Abbey, reported sighting Lord Edward's army at Green Hill, just outside the town. At about eight o'clock in the morning, Simon rode out of the town of Evesham as a great thunderstorm began to rage. An ominous black cloud hung over the field of Evesham, as Montfort led his army into battle formation. The royalist army charged with the cry 'Death to the Traitor'. Edward's forces wore a red cross as a distinguishing mark. According to the chronicler William Rishanger, when Montfort saw the advance of the royal troops, he exclaimed that 'They have not learned that for themselves, but were taught it by me.'

De Montfort's army was positioned in a loop of the River Avon, with Edward's forces holding the high ground, and blocking the only available bridge across the river. Simon, badly outnumbered, charged at the head of his cavalry and concentrated his forces on the centre of the enemy's front, hoping to drive a wedge through the line. Though these tactics initially met with some success, the baronial forces soon lost the initiative, especially as the Welsh infantry provided by Llywelyn the Last deserted at an early point in the battle. The flanks of the royal army closed in on Montfort's, surrounding them. With Montfort confronted by a force that doubled the size of his own, the battle rapidly turned into a massacre.

Despite attempts to surrender, most of the baronial rebels were slain on the field rather than taken prisoner and ransomed. In what has been referred to as "an episode of noble bloodletting unprecedented since the Conquest", Montfort's son Henry was killed first, King Henry himself, who had been in the custody of Montfort and dressed in his colours, was rescued from the mêlée by Roger de Leybourne. Henry was reported to have been thrown to the ground and would have been killed had he not lifted his visor and exclaimed to his assailant "Save me, save me, I am Henry of Winchester!". The carnage was terrible, fleeing rebels were pursed back into the town by the royalists, the slaughter continuing through the streets and even within Evesham Abbey itself.

Simon himself was unhorsed and slain in the fighting. His body was mutilated in an unparalleled frenzy by the royalists, his head, hands, feet and testicles cut off. His head was sent to Wigmore Castle by Roger Mortimer, Earl of March as a trophy to his wife. Such remains of de Montfort that could be located were collected on a ladder by monks and covered by a torn coat, they were carried to Evesham Abbey and buried, along with the body of his son Henry, under the altar there. 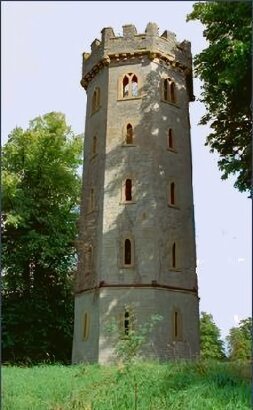 Simon's son, the younger Simon de Montfort, arrived at Evesham with reinforcements just in time to see his father's head atop a pike. Simon's widow Eleanor fled to France where she became a nun at Montargis Abbey, which had founded by her husband's sister Amicia, who remained there as abbess. She died there on 13 April 1275. 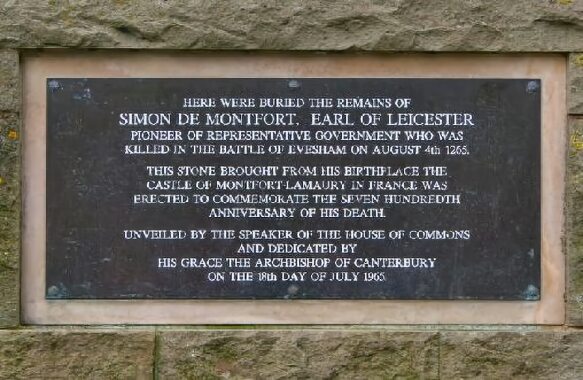 De Montfort's other son, Guy de Montfort was badly wounded and captured during the battle he was imprisoned at Windsor Castle until the spring of 1266, when he made his escape by bribing his captors and escaped to France to rejoin his family in exile.

Simon's daughter, Eleanor de Montfort, was married in 1278, to Prince Llywelyn ap Gruffydd of Gwynedd, otherwise known as Llywelyn the Last. The couple had one child, Gwenllian of Wales (born 1282) who was, after the conquest of Wales, imprisoned by Edward I of England, her mother's cousin, at Sempringham priory, where she died 1337.

In 1268 Henry of Almain, Henry III's nephew accompanied his cousin Edward on Crusade, Edward sent him back from Sicily to pacify the unruly province of Gascony. Henry took the land route along with Philip III King of France and Charles I of Sicily. While attending mass at Chiesa di San Silvestro in Viterbo on 13 March 1271, he was murdered by his cousins Guy and Simon the younger de Montfort, sons of Simon de Montfort, 6th Earl of Leicester, in revenge for the beheading of their father and older brother at the Battle of Evesham. Henry was murdered while he clutched the altar, begging for mercy. Guy is said to have replied, "You had no mercy for my father and brothers". The de Montfort brothers were excommunicated for the crime.

Simon's grave was revered as holy ground by many of the commoners until King Henry was informed, who had his remains reburied under a tree. Matthew Paris reported that Robert Grosseteste, Bishop of Lincoln, once said to Simon's eldest son Henry: "My beloved child, both you and your father will meet your deaths on one day, and by one kind of death, but it will be in the name of justice and truth."

Despite his grisly end, three separate memorials stand to commemorate Simon de Montfort at Evesham, including a nineteenth-century tower and an obelisk. The octagonal Leicester Tower, to West of Abbey Manor and an obelisk, which lies to southeast of Abbey Manor House, was erected in the 1840s by Edward Rudge on the site where de Montfort died. In 1965 a memorial of stone from Montfort-l'Amaury was laid on the site of the former altar of Evesham Abbey by the Speaker of the House of Commons and the Archbishop of Canterbury.

The Family of Simon de Montfort and Eleanor Plantagenet