The younger son of King John and Isabella of Angouleme, Richard Earl of Cornwall was born on 5 January 1209 at Winchester Castle and named in honour of his uncle King Richard the Lionheart. 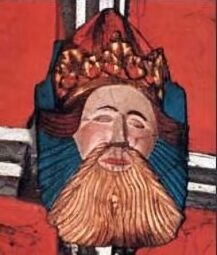 Richard was but six years old when his father died and his elder brother Henry succeeded to the throne. From 1225, when he was sixteen years old, Richard was styled Count of Poitou and in the same year, his brother King Henry III created him Earl of Cornwall. The rich revenues from Cornwall made Richard one of the wealthiest men in Europe and one of the few English barons of the time who spoke English. Relations were not always good between Richard and his brother the king, in the early years of Henry's reign, Richard rebelled against him three times.

In March 1231 Richard married the wealthy Isabel Marshal, daughter of William Marshal, 1st Earl of Pembroke and Isabel de Clare and the widow of the Earl of Gloucester. Isabel was nine years older than Richard, his brother Henry viewed the marriage with much displeasure, as the powerful Marshal family had often opposed him.

In that same year Richard acquired his main residence of Wallingford Castle in Berkshire, which became his favourite home. He spent a vast amount of money on improvements to the castle, he added a new hall and was famed for his lavish entertainment there. Then, when he almost drowned at sea, he swore to spent all his money on the church. He is quoted as having said, "Would that it had pleased God that I had expended all that I have laid out in the Castle of Wallingford in as wise and salutary a manner". 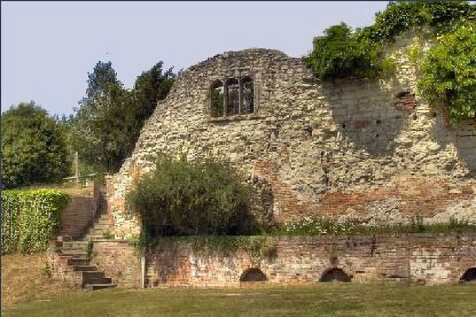 Richard rose in rebellion in 1228 against the proposed marriage of his sister, Eleanor to Simon de Montfort, he was eventually placated when his brother the king presented him with rich gifts. Richard's wife Isabel died of liver failure after childbirth in 1240, when on her deathbed, she asked to be buried at Tewkesbury Abbey beside her first husband Gilbert de Clare. Richard had her interred at Beaulieu Abbey instead, however, he did send her heart to Tewkesbury.

Later that year Richard embarked to join the sixth crusade to the Holy Land. There he negotiated the release of prisoners and the burials of crusaders killed at a battle in Gaza in 1239. He also refortified Ascalon. On his return journey from the Holy Land, Richard visited his sister Isabella, the wife of Emperor Frederick II.

To ensure his brother's loyalty, Henry proposed a marriage between Richard and Sanchia of Provence (c.1225 - 9 November 1261), the sister of his Queen, Eleanor of Provence. Richard had met Sanchia on his journey to the Holy Land, when he had stayed in Provence with her father Raymond Berenger IV. The marriage of Richard and Sanchia was celebrated at Westminster Abbey in November 1243. The couple had two children, a son who was born in July 1246 and sadly died on 15 August 1246 and Edmund of Almain, 2nd Earl of Cornwall (c. 1 January 1250 - c. 25 September 1300), who later married Margaret de Clare (born 1250, died shortly before November 1312), daughter of Richard de Clare, Earl of Gloucester.

In 1241 King Louis IX of France invested his brother Alphonse with Poitou, which caused great offence to Richard's mother, Isabella of Angoulême, who claimed to have been insulted by the French king as Richard held the lordship of Poitou. Henry and Richard were encouraged to recover Poitou by their stepfather, Isabella's second husband, Hugh X of Lusignan, eventually Henry made a truce with Louis until 1234 and returned to England having achieved nothing, historian Huw Ridgeway describes the expedition as a "costly fiasco".

Arms of Richard, Earl of Cornwall 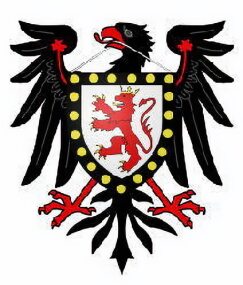 Richard was elected as King of Germany in 1256 by four of the seven German Electoral Princes, however, Alfonso X of Castile also stood for the position and was elected by Saxony, Brandenburg and Trier. The pope and King Louis IX of France favoured Alfonso, but both were eventually persuaded to support Richard by the powerful relatives of his sister-in-law, Eleanor of Provence. Ottokar II of Bohemia, who at first voted for Richard but later elected Alfonso, eventually agreed to support him, thereby he gained the required majority. On 27 May 1257, the archbishop of Cologne crowned Richard "King of the Romans" in Aachen; however, he made only four brief visits to Germany between 1257 and 1269.

Richard's second wife, Sanchia of Provence, died on 9 November 1261 at Berkhamsted Castle and was buried in Hailes Abbey. Richard fought on the side of his brother the king against Simon de Montfort in the Second Barons' War (1264-67). After Henry's defeat of the Battle of Lewes, having become separated from his brother, Richard took refuge in a windmill where he barricaded himself but was later discovered, and imprisoned until September 1265.

Richard married for a third time to the German Beatrice of Falkenburg, daughter of Dietrich I, Count of Falkenburg on 16 June 1269 at Kaiserslautern. His bride was sixteen years old at the time of the marriage and was said to be one of the most beautiful women of her time. The marriage did not produce any children.

In 1268 Richard's eldest son Henry of Almain accompanied his cousin Edward (the future King Edward I) on Crusade, Edward sent him back from Sicily to pacify the unruly province of Gascony. Henry took the land route along with Philip III King of France and Charles I of Sicily. While attending mass at Chiesa di San Silvestro in Viterbo on 13 March 1271, he was murdered by his cousins Guy and Simon the younger de Montfort, sons of Simon de Montfort, 6th Earl of Leicester, in revenge for the beheading of their father and older brother at the Battle of Evesham. Henry was murdered while he clutched the altar, begging for mercy. Guy is said to have replied, "You had no mercy for my father and brothers". The de Montfort brothers were excommunicated for the crime.

In December 1271, at the age of 62, Richard suffered a stroke in which his right side was paralysed and he was left bereft of speech. He died at Berkhamsted Castle in Hertfordshire on 2 April 1272, his end being hastened by his grief upon the murder of his son. Richard was buried next to his second wife Sanchia of Provence and Henry of Almain, his son by his first wife, at Hailes Abbey, which he had founded.