The great William Marshal, born circa 1147, was the younger son of John Marshal, a baronial supporter of the Empress Matilda, the daughter and appointed heir of King Henry I.

During the civil war known as the Anarchy the young William was a hostage in the hands of King Stephen at the Siege of Newbury Castle in 1152, where William's biographer recorded, he was used to ensure his father John honoured his promise to surrender the castle. John Marshal, however, reinforced the castle's defences and alerted Matilda's forces. King Stephen ordered John to surrender or William would be hanged, John replied callously "I still have the hammer and the anvil with which to forge still more and better sons!" Consequently, a threat was made to launch the boy from a pierrière, a type of trebuchet towards the castle. Fortunately for William, Stephen could not bring himself to carry out the act. 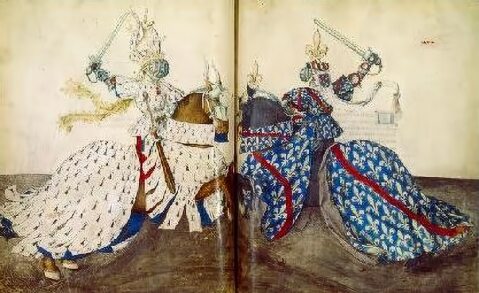 As a younger son William had no lands or title, at about the age of twelve, he was sent to Normandy to be brought up in the household of William de Tancarville, where he began his training as a knight. During the reign of Matilda's son, Henry II, the first Plantagenet king, William was a knight-errant, engaging in the brutal tournaments popular at the time. He served as guardian to Henry's eldest surviving son and heir, Henry, the Young King. Marshal unhorsed Richard the Lionheart in 1189, when as Duke of Aquitaine, Richard, allied to Phillip Augustus of France, was in rebellion against his father. William was covering the flight of the ailing Henry II from Le Mans to Chinon at the time and could have killed Richard but slew his horse instead. He remained faithful to Henry II until his death at Chinon on 6 July, 1189.

During Henry II's last days he had promised Marshal the hand and estates of Isabel de Clare (c.1172-1220) but had not found the time to complete the arrangements for the marriage. Richard honoured his father's promise and in August 1189, at the age of 43, William married the 17-year-old daughter and heiress of Richard de Clare 'Strongbow', Earl of Pembroke, the conqueror of Ireland and Marshal acquired large estates and claims in England, Wales, Normandy and Ireland. The marriage was to produce 10 children. William's five sons inherited the office of Marshall after him, which then passed through a daughter to the Bigod, Mowbray and Howard families to the present Duke of Norfolk.

Richard appointed him a justicar and was included in the council of regency which the King appointed on his departure for the Third Crusade in 1190. William opposed Longchamp and Richard's rebellious younger brother John. However, following the death of Richard I, he supported King John when he became king in 1199, arguing against those who maintained the claims of Arthur Duke of Brittany, the son of John's elder brother Geoffrey Plantagenet and helped Hubert Walter to strengthen King John's position. William succeeded his elder brother John as marshall in 1200, the surname derives from the office. William opposed John's expedition into France in 1205 but was left in charge of England's defence. He later became John's chief adviser and the guardian of his heir, Henry. Despite their differences, William remained loyal throughout the hostilities between John and his barons which culminated on 15 June 1215 at Runnymede with the sealing of Magna Carta. William was one of the few who remained loyal to the king through the First Barons' War.

The coronation of Henry III 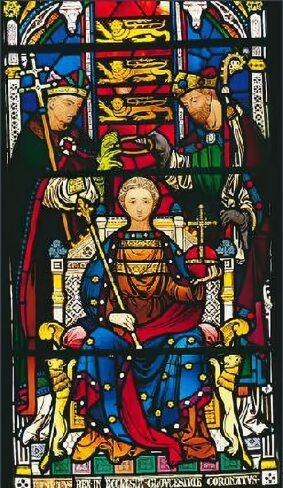 On 11 November 1216 at Gloucester, upon the death of King John, in the midst of a French invasion headed by Prince Louis, William Marshal was appointed protector of the nine-year-old Henry III, and regent of the kingdom. At the time of King John's death, London and most of the channel ports were held by the French. In a popular move, Marshal announced his intention to rule by the terms of the Magna Carta. Henry was described as being a "pretty little knight" when crowned at the Abbey Church of Gloucester with a circlet belonging to his mother since hs father had previously lost the royal treasure in the Wash. Despite his advanced years, he was then aged around 70, William prosecuted the war against the French with remarkable energy. During the ensuing battle of Lincoln, he charged at the head of the young King's army and led them to victory. He was preparing to besiege Louis in London when the war was terminated by the naval victory of Hubert de Burgh in the straits of Dover.

During the last three years of his life, William was to become a central figure in England's history. An anonymous troubadour wrote a rhymed biography of him for his son William. In his last days, William was taken from the Tower of London by the river to his manor at Caversham and called the great council to witness his resignation. As they collected around his death bed, he advised the young Henry III;-

'Your barons must choose someone to care for you and your realm to the satisfaction of God and Man. May He give you a guardian who will do you honour'. William rejected the claim of Peter des Roches, Bishop of Winchester, to be regent, whom he distrusted and instead entrusted Henry to the care of Pandulf, the Papal legate, continuing 'Sire, I pray God that if I have ever done anything pleasing to Him, He will give you the grace to be a gentleman. If it should happen that you follow the example of some evil ancestor, I pray God not to grant you a long life. 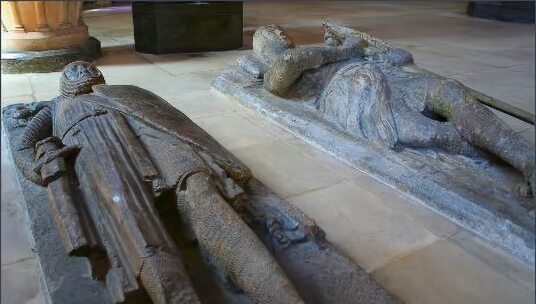 In fulfilment of a vow he had made while on crusade, William was then admitted to the Order of the Knights Templar. The master of the order declared 'In the world you have had more honour than any other knight for prowess, wisdom and loyalty. When God granted you His grace to this extent, you may be sure He wished to have you at the end'.

Three Templar knights watched over William day and night. He died dressed in the robes of a Knights Templar, a knight-errant once again, on 14 May 1219. His bier was taken to Reading Abbey and then to Westminster, and finally to the Temple Church in London. He was buried by Stephen Langton, Archbishop of Canterbury, who stated 'Behold, all that remains of the best knight who ever lived.' The tomb of William Marshal still survives at the Temple Church.

(i) John of Cornwall

(i) Joan de Munchensi (1230-20 September 1307) married William of Valence, the fourth son of King John's widow, Isabella of Angoulême, and her second husband, Hugh X of Lusignan, Count of La Marche. de Valence was a half-brother to Henry III.

Isabella of Angoulême PreviousNext The Legend of Robin Hood