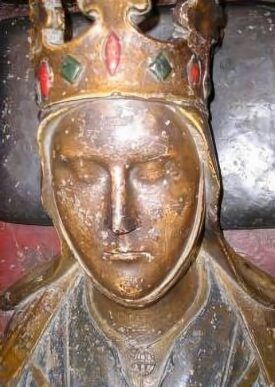 Isabella of Angoulême was the daughter and heiress of Aymer Taillefer, Count of Angoulême and Alice of Courtenay, who was sister of Peter II of Courtenay, Emperor of Constantinople and granddaughter of King Louis VI of France. Through her connections with the Courtenay family, Isabella was related to the kings of Jerusalem, and was a half-sister of Peter, count of Joigny, the child of her mother's earlier marriage.

Isabella had been betrothed to Hugh de Lusignan, Count of La Marche, although the marriage had been delayed because of her extreme youth. A renowned beauty, reputed to have had blonde hair and blue eyes, it is said that King John of England became infatuated with Isabella, then twelve years old. The unprincipled John stole the enchanting Isabella from under Hugh's very nose, which resulted in King Philip II of France confiscating John's French lands, and the entire de Lusignan family rebelling against him.

His first marriage to Isabella of Gloucester had been declared invalid, since they were related within the prohibited degrees. Isabella's marriage to King John took place on 24th August 1200, at Bordeaux. She was crowned Queen of England on 9th October at Westminster Abbey. It was said that John was so besotted with his young bride that he refused to rise from bed until well after noon. Isabella was far younger than her husband but was possessed a volatile temper to match his own, resulting in a tempestuous marriage. Both took lovers and Matthew Paris referred to Isabella as 'more Jezebel than Isabel'.

Hugh de Lusignan, Isabella's slighted fiancee, had sought redress from his overlord Phillip Augustus, who promptly summoned John to the French court to answer for his actions. John refused to comply and accordingly, Phillip, acting under feudal law, claimed those territories ruled by John as Count of Poitou and declaring all John's French territories except Gascony forfeit, he invaded Normandy. Chateau Gaillard, Richard the Lionheart's impregnable castle, fell to the French after a long siege in 1203, it was followed by the rest of Normandy. John, his resources exhausted, was forced to flee the smoking rubble of his father's once great French Empire. 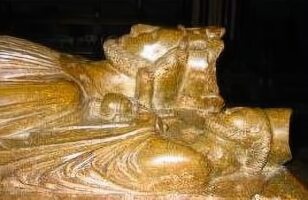 Isabella became Countess of Angoulême in her own right on 16 June 1202. She gave birth to a son and heir, Henry, seven years after her marriage to John, on 1st October 1207 at Winchester Castle. Another son, Richard, later Earl of Cornwall and King of the Romans was born on 5th January 1209. Three daughters were to follow, Joan, later Queen of Scots, was born on 22 July 1210, Isabel, later Holy Roman Empress in 1214 and Eleanor, later Countess of Pembroke in 1215.

John died at Newark on the wild stormy night of 18th October, 1216, leaving England in a state of anarchy and civil war. Isabella and John's nine-year-old son Henry, described as being a "pretty little knight" was crowned King Henry III at the Abbey Church of Gloucester with a circlet belonging to his mother since his father had previously lost the royal treasure in the Wash.

The highly capable William Marshal, Earl of Pembroke, was appointed Regent along with Hubert de Burgh. At the time of King John's death, London and most of the channel ports were held by the French. In a popular move, Marshall announced his intention to rule by the terms of Magna Carta, the French invaders were driven out and peace restored in England. Less than a year after his coronation, still a young woman, Isabella left her son in the care of William Marshal and returned to France to assume control of her inheritance of Angoulême. 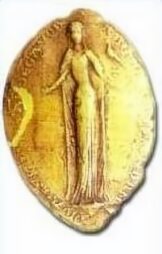 Arrangements were made to marry John and Isabella's eldest daughter, Joan, to Hugh X of Lusignan, "le Brun", Count of La Marche, to whom Isabella herself had been betrothed in her youth. As was the custom at the time, Joan was being brought up at the Lusignan court in preparation for her marriage. Hugh, however, upon seeing Isabella, whose beauty had not diminished, preferred the girl's mother. In the spring of 1220, she married Hugh X of Lusignan, Princess Joan was narried instead to King Alexander II of Scotland in 1221.

Isabella had married Hugh without the consent of her son the King's council in England, which was then required procedure for a former Queen of England. The Council reacted by confiscating her dower lands and stopped the payment of her pension as a Queen Dowager of England. Isabella and Hugh retaliated by threatening to retain custody of Princess Joan, now betrothed to the King of Scots. Terms were finally agreed on and Isabella recieved compensation for her dower lands in Normandy and payment for arrears in her pension. 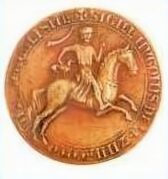 Isabella had nine more children by Hugh de Lusignan. Described as "vain, capricious, and troublesome" by a contemporary, Isabella was summoned to the French court with her husband in 1241 to swear fealty to King Louis IX of France's brother, Alphonse, who had been invested as Count of Poitou. Their mother, Blanche, Queen Dowager of France and a cousin of King John, openly snubbed her. Isabella already bore a deep-seated hatred of Blanche, due to her active support of the French invasion of England in May 1216. Isabella, seething and infuriated, began to actively conspire against King Louis. Isabella and her husband united forces with her son-in-law Raymond VII of Toulouse, who was married Margaret of Lusignan, in rebellion against the French king, which failed.


Two royal cooks were arrested for attempting to poison the King of France in 1244, under questioning they confessed to having been in the pay of Isabella. She fled to Fontevrault Abbey, where she remained for two years. Isabella died on 31 May 1246. At her own request, she was first buried in the churchyard of the Abbey, as an act of repentance for her sins. Her second husband, Hugh de Lusignan died three years later on crusade. Her son Hugh XI of Lusignan succeeded his father as Count of La Marche and Count of Angoulême in 1249. Many Lusignan children left France to find positions at the court of Henry III, their half-brother.

On a visit to Fontevrault, King Henry III of England was shocked to find his mother buried outside the Abbey and ordered her moved inside, were she was re-interred beside John's parents, Henry II and Eleanor of Aquitaine.


The Ancestry of Isabella of Angoulême

The Children of Isabella of Angouleme

By her first marriage to King John:-

By her second marraige to Hugh X of Lusignan