Joanna Plantagenet, also referred to as Joan, was born at Château d'Angers in Anjou, the seventh child and third daughter of the great Henry II and Eleanor of Aquitaine. By the time of Joanna's birth her parents' tumultuous relationship was breaking down; Eleanor of Aquitaine would eventually join a rebellion against her husband, after which she was imprisoned by him for sixteen years. 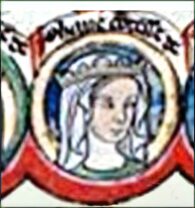 Joanna's youth was spent at her mother's courts at Winchester and Poitiers, although the couple's youngest children, Joanna and her brother, John, spent some time at the Abbey of Fontevraud, where she was taught several languages, English, Norman French and rudimentary Latin. In 1176, when Joanna was eleven years old, King William II of Sicily dispatched ambassadors to England to ask Henry II for her hand in marriage. The betrothal was confirmed on 20 May and on 27 August. Queen Eleanor was allowed to travel to Winchester to say farewell to her youngest daughter.

Joanna set sail for her new life in Sicily, she was escorted by John of Oxford, the bishop of Norwich and her father's half-brother, Hamelin de Warenne, Earl of Surrey. She was escorted from Barfleur by her eldest brother Henry, at Poitiers, the entourage was met by her brother Richard, who escorted her through the Duchy of Aquitaine across the County of Toulouse to Saint Gilles, a French port on the Mediterranean Sea. In Saint Gilles, her entourage was met by Alfano, Archbishop of Capua, and Richard Palmer, Bishop of Syracuse, representatives of the Kingdom of Sicily.

After what turned out to be a hazardous voyage, Joan arrived safely, and on 13 February 1177, she married William II of Sicily and was crowned Queen of Sicily at Palermo Cathedral. The couple had one child Bohemond, Duke of Apulia, born in 1181, he did not survive infancy. When William II died in November 1189 he was succeeded by his bastard cousin Tancred, who seized the lands given to her by William with the sound strategic reason that Monte Sant'Angelo lay on the route taken by the invading forces of Henry VI of Germany.

Richard I and Joanna greeting Philip Augustus of France 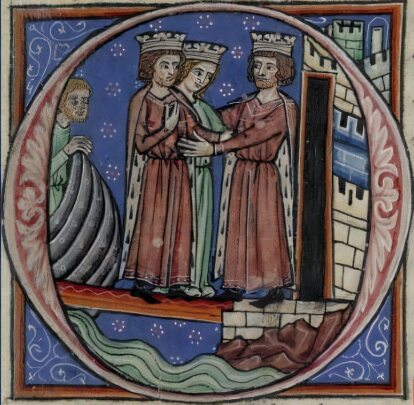 Joanna's brother Richard I, known as 'the Lionheart', who had succeeded as King of England on the death of their father in 1189, arrived in Italy in 1190, whilst en-route to the Holy Land to fight in the Third Crusade. Richard demanded that Tancred return to his sister, along with every penny of her dowry. When Tancred baulked at these demands, Richard seized a monastery and the castle of La Bagnara. He decided to spend the winter in Italy and attacked and subdued the city of Messina in Sicily. Finally, Tancred agreed to the terms and returned Joanna's dowry.

In March 1191, Eleanor of Aquitaine arrived in Messina with Richard's intended bride, Berengaria of Navarre. Eleanor returned to England, leaving Berengaria in Joanna's care. Richard postponed his wedding due to Lent, put his sister and bride on a ship, and set sail.

The voyage to the Holy Land continued, but the ship carrying Berengaria and Joanna was wrecked on the coast of Cyprus in the course of a violent storm. The Cyprians besieged the English survivors of the wreck at Limassol. A large amount of treasure, intended for use on the crusade, was appropriated by Isaac Comnenus, the Emperor of Cyprus. Richard dispatched a letter to Isaac, which was arrogantly ignored. Outraged, he unleashed the full force of the famed Plantagenet fury on the unfortunate Isaac, who discovered he had been unwise to underestimate the strength of the English king. The Cyprian Emperor was overthrown and English governors were set up over the island which was used as a garrison for the crusade. Cyprus proved to be a vital source of supplies throughout the Third Crusade and would remain a Christian outpost in the Middle East for the following four centuries. Richard married Berengaria on 12 May 1191 at Limassol, Cyprus and then sent Joanna and Berengaria on to Acre.

Joanna was Richard's favourite sister, but he was not above using her as a bargaining chip in his political schemes. A superlative general but a poor politician, Richard proposed that Saladin should give the Holy Land to his nephew Saphadin, whom he suggested should marry his sister Joanna, forming a peaceful alliance between Christian and Moslem. The bemused Saladin, unable to believe his luck, accepted. Joanna, however, possessed the famed Plantagenet temper in full measure and refused outright to contemplate marriage with a Moslem, resulting in a heated family dispute. 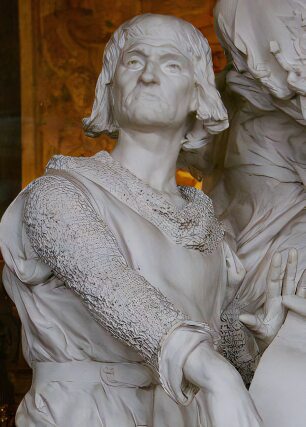 Joanna was married for a second time in October 1196, at Rouen, when she became the third wife of Raymond VI, Count of Toulouse, she bought Quercy and the Agenais as her dowry. The marriage produced two children Raymond VII of Toulouse (born July 1197), and a daughter, Joanna (born 1198), who married Bernard II de la Tour, Lord of la Tour. It has been claimed that her marriage to Raymond of Toulouse was not a happy one and that she fled to her brother Richard's domains in 1199.

Her favourite brother Richard was killed at the Siege of Chalus. On the evening of 26th of March, 1199, Richard was walking around the castle directing the siege, when an archer, using a frying pan as a shield, fired a crossbow bolt at him from the battlements, he ducked too late and the bolt embedded itself in his left shoulder. In attempting to pull the bolt out, the shaft broke, leaving the iron head in his flesh. A clumsy surgeon working by torchlight, although succeeding in removing the arrowhead, made the wound far worse and gangrene set in. When the Castle fell, the archer was brought before Richard, who, aware that he was soon to meet his maker, forgave him, stating "Live on, and by my bounty behold the light of day," he gave orders that he was to be set free and given a hundred shillings. Richard's devoted mother, Eleanor of Aquitaine, rushed to his side and was with him to the end, he died in her arms on 6th April, 1199. His wife, Berengaria, was not even summoned. Richard's mercenary captain, Mercadier had the archer sent to Joanna, who had him flayed alive and torn apart by wild horses.

"The Chronicle of Guillaume de Puylaurens", however, states that Joanna's last few months: "She was an able woman of great spirit, and after she had recovered from childbed, she was determined to counter the injuries being inflicted upon her husband at the hands of numerous magnates and knights. She therefore took arms against the lords of Saint-Felix, and laid siege to a castrum belonging to them known as Les Cassés. Her efforts were of little avail; some of those with her treacherously and secretly provided arms and supplies to the besieged enemy. Greatly aggrieved, she abandoned the siege, and was almost prevented from leaving her camp by a fire started by the traitors. Much affected by this injury, she hastened to see her brother King Richard to tell him about it but found that he had died. She herself died, whilst pregnant, overcome by this double grief."

Receiving no allowance from her husband Raymond of Toulouse, the distressed Joanna returned to her mother and brother, the new King John at Rouen. in June 1199. In September, King John granted her a lump sum of 3,000 marks, to dispose of in her will; she mentioned a legacy towards the cost of a new kitchen at Fontevraud and asked Eleanor to dispose of the remainder in charitable works for the religious and the poor.

Joanna asked to be admitted to Fontevrault Abbey, an unusual request for a married, pregnant woman. Eleanor of Aquitaine sent for Matilda, the Abbess of Fontevraud but, fearing she might arrive too late, she asked Hubert Walter, Archbishop of Canterbury, to intervene. The Archbishop attempted to dissuade Joanna, but was impressed by her fervour and convened a committee of nuns and clergy at which her request was granted. She died in childbirth, on 4 September 1199, at the age of thirty-three and was veiled a nun on her deathbed. Her son, born by Caesarean section once Joanna had died, lived just long enough to be baptised and was named Richard.

Joanna was buried at Fontevrault Abbey, and fifty years later her son Raymond VII, Count of Toulouse would be interred next to her. Joan's effigy was originally shown kneeling at the head of her father's tomb with her hands clasped and head bent in an attitude of devotion. Her son Raymond was buried beside her and his effigy knelt facing hers. Both effigies were destroyed during the French Revolution.