Henry III, the eldest son of King John and Isabella of Angouleme was born on 1st October 1207 at Winchester. A grandson of Henry II and Eleanor of Aquitaine, he was also the great-great-grandson of Louis VI of France.

Henry was born on 1 October 1207, in Winchester Castle, Hampshire. Little has been recorded of his early life, other than he was initially cared for by a wet nurse called Ellen, as was the aristocratic tradition at the time. 1212 his education was entrusted to Peter des Roches, the Bishop of Winchester. Henry received military training under the auspices of Philip D'Aubigny. Henry's parents had five children, the other four were – Richard, Earl of Cornwall, Joan, later Queen Consort of Scotland, Isabella, later Holy Roman Empress and Queen of Sicily and Eleanor, later the wife of Simon de Montfort and Countess of Leicester.

He succeeded his unpopular father at the age of nine, to a kingdom in a state of anarchy. Henry was described as being a "pretty little knight" when crowned at the Abbey Church of Gloucester with a circlet belonging to his mother since hs father had previously lost the royal treasure in the Wash. 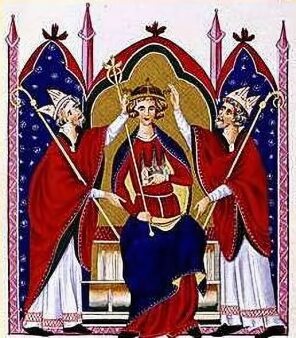 The highly capable William Marshal, Earl of Pembroke, was appointed Regent along with Hubert de Burgh. At the time of King John's death, London and most of the channel ports were held by the French. In a popular move, Marshal announced his intention to rule by the terms of the Magna Carta, the French invaders were driven out and peace restored in England. The great William Marshal, having served four generations of the Plantagenets with great ability, died in May 1219, leaving de Burgh as sole Regent.

King Henry III could not have been less like his father in character, nor was he built in the usual Plantagenet mould. Cultivated, aesthetic, petulant and kind natured but weak and ineffectual, Henry reached his majority at the age of nineteen in 1227 and took over the reins of government of his kingdom but retained de Burgh as his chief adviser.

A contemporary has stated of Henry III that "His mind seemed not to stand on a firm basis, for every sudden accident put him into passion". He was of middle stature, measuring around 5' 6" and like his father, inclined to be plump. He had a drooping left eyelid, which was inherited by his oldest son Edward I, the eyelid covered half of the eye which rendered him a rather sinister appearance. 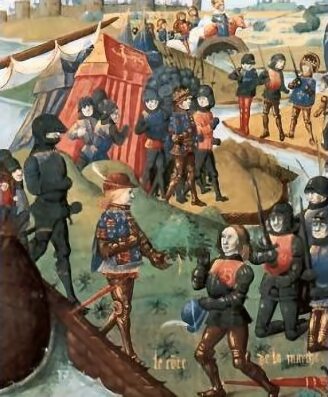 Early in his reign Henry wished to regain the Duchy of Normandy, which had been lost to the French by his father, King John. In 1226, he promised to marry Yolande of Brittany. An alliance with her father Peter I, Duke of Brittany would allow Brittany to be used as a base from which Henry could launch attacks on Normandy. Henry's cousin, Blanche, Queen of France, recognized this threat and manoeuvred Peter of Brittany to promise Yolande in marriage to one of her sons instead. Henry then pledged himself to Joan of Ponthieu, but since this also posed a threat to Normandy, the French again intervened and prevented the marriage.

In 1236, Henry married Eleanor of Provence, whose sister Margaret had already married Louis IX of France. Henry launched an unsuccessful expedition into Gascony in 1230, a belated attempt to regain the Plantagenet ancestral lands in France. Eleanor was the second daughter of Raymond Berenger, Count of Provence (1198-1245) and Beatrice of Savoy (1206-66). Beatrice herself was the daughter of Tomasso, Count of Savoy and Margaret of Geneva. Eleanor's elder sister, Margaret, was married to the King of France. No physical description of Eleanor survives, but since her son Edward I was over six feet tall and her husband was not, it can safely be assumed that she was quite tall for a woman. Unlike her husband, Eleanor was a strong willed character. Legend records that his attention had been drawn to her by a poem she addressed to his brother, Richard Earl of Cornwall.

A further disastrous military campaign to expel Louis IX from Poitou was embarked upon in 1254. Disaffection at Henry's rule was by this time rife amongst the nobles. Henry foolishly showered honours on his Queen's foreign family, which increased their grievances. Eleanor's maternal uncle, Peter of Savoy, was granted the honour of Richmond and his brother, Boniface, was made Archbishop of Canterbury. 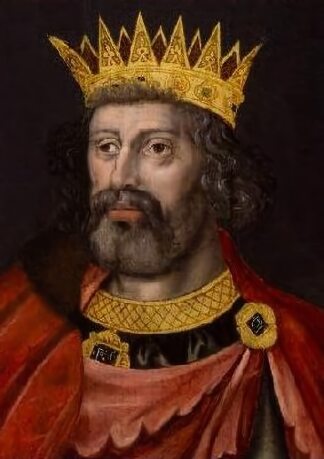 The situation was further inflamed by Henry's patronage of his French relatives, the Lusignans. They were his half-brothers by his mother's second marriage to Hugh de Lusignan. They too were given Earldoms and church posts in England. Henry made his half brother, William de Valence, Earl of Pembroke in 1247, while another half brother, Aymer, became bishop-elect of Winchester.

These foolish policies coupled with Henry's pathological irresolution in government-produced political revolution. By the Provisions of Oxford (1258), a council of fifteen nobles to help govern the country was imposed on the King. Chief among these was Henry's brother-in-law, the French-born Simon de Montfort, Earl of Leicester, the husband of his sister, Eleanor.

The resentful Henry asserted himself and recovered power in 1261. Queen Eleanor herself was highly unpopular and was particularly loathed by the Londoners. In July 1263, she was pelted with rotten eggs and vegetables whilst sailing down the Thames in her barge. The Queen was rescued by Thomas FitzThomas, the mayor of London, and was given refuge at the home of the Bishop of London. Her son Edward was never to forget this insult to his mother and thereafter reciprocated by detesting the Londoners.

The King suffered defeat at the hands of de Montfort at the Battle of Lewes on 14th May, 1264, de Montfort appropriated control of the government and a subsequent first representitive parliament was called in 1265. He selected a council of nine and ruled in the name of the king. De Montfort realised the need to obtain the support of the middle classes, in 1264, he summoned knights from each shire in addition to the normal high churchmen and nobility to an early pre-Parliament and in 1265 invited burgesses from selected towns. Henry and his eldest son, Edward, along with his brother, Richard, Earl of Cornwall, were placed under house arrest. Edward, of a much more able character than his father, escaped from his forced confinement and took up arms in Henry's cause.

Edward defeated de Montfort at the Battle of Evesham in 1265. Henry was thrown to the ground and would have been killed had he not lifted his visor and exclaimed to his assailant "Save me, save me, I am Henry of Winchester!" De Montfort, the founder of Parliament, was killed in battle. His body was cut into pieces and his head sent to Wigmore Castle. Some of his remains which could be found were buried beneath the altar of Evesham Abbey. Edward, although disliking de Montfort, adopted some of his ideas. 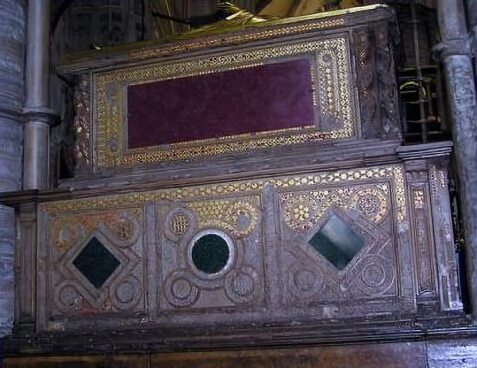 In the words of architectural historian John Goodall, Henry was "the most obsessive patron of art and architecture ever to have occupied the throne of England". He rebuilt the royal palace at Westminster, his favourite home, rebuilding both the palace and Westminster Abbey at a cost of almost £55,000. Henry spent in the region of £58,000 on his royal castles, carrying out major works at the Tower of London, Lincoln and Dover and added the Great Hall at Winchester Castle. At Windsor, a huge overhaul of the castle produced a lavish palace complex, whose style and detail inspired many subsequent designs in England and Wales.

Henry revered and venerated the Saxon King St. Edward the Confessor, who had been canonised in 1161, even having a mural painted of him in his bedchamber. He possessed a mania for building and his life's work was the re-building of Westminster Abbey, first built by King Edward.

In 1269, the new Abbey was consecrated, and Edward the Confessor's body reburied there in a rich and imposing shrine. Henry III himself helped carry the Confessor's coffin to its new resting place.

Three years later Henry III himself died at his Palace of Westminster on 16 November 1272, aged sixty- five and became the first of the Plantagenets to be buried within the Abbey, which was later to become the mausoleum of England's monarchs. His tomb, made by Cosmati marblers, lies by Edward the Confessor's shrine. His body was temporarily laid to rest in the tomb of Edward the Confessor while his sarcophagus was constructed. Henry was succeeded by his oldest son, Edward I.

The widowhood of Eleanor of Provence

Eleanor of Provence remained in England after the death of her husband, bringing up her grandchildren, Edward's children, Henry and Eleanor and John, the son of her daughter, Beatrice. When her grandson Henry died in her care, she mourned his death greatly, founding Guildford Priory in his memory. Her widowhood was to last for nineteen years.

The Dowager Queen finally entered a convent, along with her granddaughter, Mary, dying at the convent of Amesbury in 1291. Her son, Edward I later erected a tomb there to her memory.

After the sentence 'out major works at the Tower of London, Lincoln and Dover and added the Great Hall at Winchester Castle'. delete Tower of London from that sentence then add 'Henry and his more famous son Edward I (1272-1307) expanded the Conqueror's Tower of London fortress, addingthe huge ‘curtain’ walls with a series of smaller towers, including the infamous 'Bloody Tower' (tower_of-london_6) and enlarging the moat.

Final paragraph of 'Final Years' section add at the beginning of paragraph 'In 1270 Prince Edward left England to participate in the Eighth Crusade. King Henry's health was by this time deteriorating and concerns about further rebellion increased. The king wrote to Edward asking his sono return to England, but Edward failed to do so. The king never regained his health fully and on the evening of 16 November 1272, aged 65, he died at the Palace of Westminster He was succeeded by Edward, his eldest surviving son, who finally arrived back in England in August 1274. Delete sentence beginning 'Three years later'and replace with 'Henry was the first of the Plantagenets to be buried within the Abbey..."

The Ancestry of Henry III

Maternal Great-grandfather: Peter I of Courtenay

The family of Henry III and Eleanor of Provence