The eldest son of Richard Earl of Cornwall and his first wife Isabel Marshal, daughter of William Marshal, 1st Earl of Pembroke and Isabel de Clare, Henry of Almain was born on 2nd November 1235.

Henry's father Richard, Earl of Cornwall was the second son of King John and Isabella of Angouleme and had married Isabel Marshal, daughter of the great William Marshal, 1st Earl of Pembroke and Isabel de Clare. 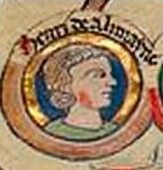 Richard of Cornwall had been elected as King of Germany in 1256, his son Henry of Almain was so called due to his father's German connections, Almain is derived from Allemagne, the French word for Germany. When his first wife Isabel Marshal died in childbirth on 17 January 1240 Richard of Cornwall remarried to Sanchia of Provence, the sister of his brother Henry III's queen, Eleanor of Provence. 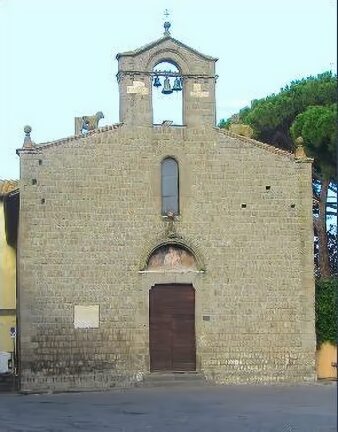 Henry married Constance of Béarn (d. 1299), daughter of Gaston VII of Montcada, Viscount of Béarn, on 5 May 1269 at Windsor Castle.

The years 1264-1267 saw the conflict known as the Second Barons' War, in which baronial forces led by Simon de Montfort fought against those who remained loyal to the king. As the nephew of both Henry III and Simon de Montfort, (de Montfort had married Eleanor of England, daughter of King John and Isabella of Angoulême) Henry wavered between the two at the beginning of the war, but finally took the side of the king and was among the hostages taken by de Montfort after the Battle of Lewes (1264), he was imprisoned at Wallingford Castle and later released.

De Montfort was killed at the second great encounter of the Barons' War, the Battle of Evesham, after which his body was mutilated in an unparalleled frenzy by the royalists. His head was sent to Wigmore Castle by Roger Mortimer, Earl of March and such remains of de Montfort that could be located was buried under the altar of Evesham Abbey by the canons. His son, the younger Simon de Montfort, arrived at Evesham with reinforcements just in time to see his father's head atop a pike. De Montfort's other son, Guy de Montfort was badly wounded and captured during the battle he was imprisoned at Windsor Castle until the spring of 1266 when he made his escape by bribing his captors and fled to France to rejoin his family in exile.

In 1268 Henry accompanied his cousin Edward (the future King Edward I) on Crusade, Edward sent him back from Sicily to pacify the unruly province of Gascony. Henry took the land route along with Philip III King of France and Charles I of Sicily.

While attending mass at Chiesa di San Silvestro in Viterbo on 13 March 1271, he was murdered by his cousins Guy and Simon the younger de Montfort, sons of Simon de Montfort, 6th Earl of Leicester, in revenge for the beheading of their father and older brother at the Battle of Evesham. Henry was murdered while he clutched the altar, begging for mercy. Guy is said to have replied, "You had no mercy for my father and brothers". The de Montfort brothers were excommunicated for the crime.

Simon de Montfort died later that year at Siena, "cursed by God, a wanderer and a fugitive". His brother Guy de Montfort, Count of Nola, was stripped of his titles and was taken into the service of Charles of Anjou, but was captured off the coast of Sicily in 1287 by the Aragonese at the Battle of the Counts. He died in a Sicilian prison. Henry's murder is mentioned by Dante Alighieri, who took it upon himself to place Guy de Montfort in the seventh circle of hell in his masterpiece, The Divine Comedy, which was written at least 40 years after Henry's death.

Henry's body was buried at Hailes Abbey in Gloucestershire, but his heart was preserved in a golden heart shrine and buried in Westminster Abbey, by the shrine of Edward the Confessor. Since he had no children, his estates were inherited by his younger brother, Edmund, 2nd Earl of Cornwall.

The Ancestry of Henry of Almain