Eleanor of Provence was born circa 1223 at Aix-en-Provence, the second daughter of Raymond Berenguer IV, Count of Provence (1198-1245) and Beatrice of Savoy (1205-1267), the daughter of Thomas I of Savoy and his second wife Margaret of Geneva. 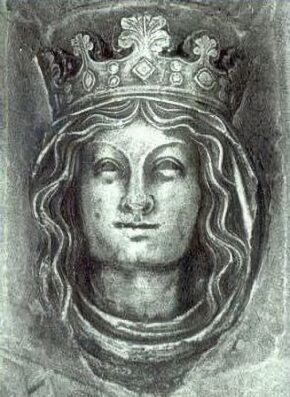 Eleanor was married to King Henry III at Canterbury Cathedral at the age of twelve on 14th January 1236. Henry was then twenty-eight. Famed for her beauty. She was dark-haired with fine dark eyes and was renowned for her learning and her skill at writing poetry, Henry was well pleased with his new wife and the couple became devoted to each other. Eleanor's three sisters also married kings, the eldest Margaret married Louis IX of France, her sister Sanchia was married to Henry's younger brother Richard Earl of Cornwall, known as King of the Romans and the youngest, Beatrice married Charles I of Sicily.

A large number of Savoyard relatives accompanied Eleanor to England in her retinue, most notably her maternal uncles, who were given influential positions in the government. Her influence with the King and her imperious manner did not endear her to the English and led to her unpopularity with the English barons and created friction during Henry's reign. She also seems to have evoked the dislike of the Londoners. On one occasion, her barge was attacked as she sailed down the River Thames by angry citizens who pelted her with stones, mud, rotten eggs and vegetables. She was rescued by Thomas Fitzthomas, the Mayor of London, and took refuge at the bishop of London's home.

Her first son, the future Edward I, was born on the 17th of June, 1239. Her youngest daughter Katherine was deaf and mute from birth, Katherine died aged three on 3 May 1257, after which both Henry and Eleanor were said to be heartbroken, Eleanor becoming sick with grief.

Henry III died, after thirty-six years of marriage, in 1272, and was succeeded by Eleanor's son Edward I, who was to become one of the greatest of the Plantagenet Kings.

Eleanor survived her husband by almost twenty years, the dowager queen remained in England and helped to bring up several of her grandchildren, Edward's son Henry and daughter Eleanor, and her daughter Beatrice, Duchess of Brittany's son John. When her grandson Henry died in her care in 1274, Eleanor founded the priory at Guildford in his memory. She later retired to a convent.

Eleanor died on 24/25 June 1291 at Amesbury. She was buried in the Abbey of St Mary and St Melor, Amesbury on 9 December. The exact site of her grave at the abbey is unknown. Her heart was taken to London where it was buried at the Franciscan Priory.

The Ancestry of of Eleanor of Provence

Maternal Grandfather: Thomas I of Savoy

The family of Henry III and Eleanor of Provence