Imposing Warwick Castle stands proudly on an outcrop of rock by the River Avon. It was constructed by Henry de Beaumont, when William the Conqueror issued orders in 1068 that a defensive chain of castles be built to maintain the new king's power over his Saxon subjects. 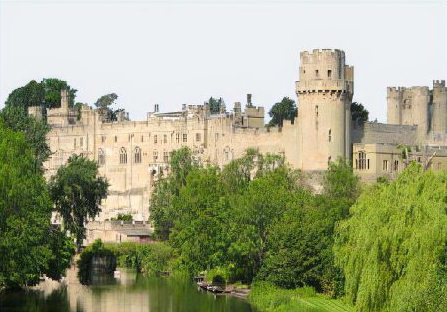 Henry de Beaumont was granted the title of Earl of Warwick by the Conqueror's successor, William Rufus, his son Roger de Newburgh later inherited the title as 2nd Earl of Warwick. In 1153, his wife, Gundred de Warenne, was tricked into believing that her husband was dead and surrendered the castle to the invading army of Henry of Anjou, later King Henry II, the first of the Plantagenet dynasty.

Ethelfleda, Lady of Mercia, the daughter of Alfred the Great, had fortified the town of Warwick against Viking incursions. It is therefore possible that some kind of defensive structure existed on the site before the construction of the motte and bailey Norman castle at Warwick.

Warwick Castle remained in the possession of the Beaumont family for several generations. During this period the wooden Norman structure was replaced by a stone shell keep, now no longer surviving. The wooden palisade which surrounded the bailey was probably replaced by stone walls at the same time. In 1312, Piers Gaveston, Earl of Cornwall,the infamous favourite of King Edward II was captured by Guy de Beauchamp, 10th Earl of Warwick, and imprisoned at Warwick Castle until his gruesome execution on 9 June 1312.

Thomas Beaumont died without a male heir in 1242 and Warwick Castle was inherited by his sister Margaret Beaumont, who was married John de Plessis who assumed the 7th Earl of Warwick in her right. It later passed to Margaret's nephew, William Mauduit. During the Baron's War, the castle was attacked by Simon de Montfort's forces the Earl and his wife taken prisoner. Maudit and his countess were taken to Kenilworth Castle, he was released after payment of a ransom but died soon after. The castle then passed to his sister's son, William de Beauchamp. 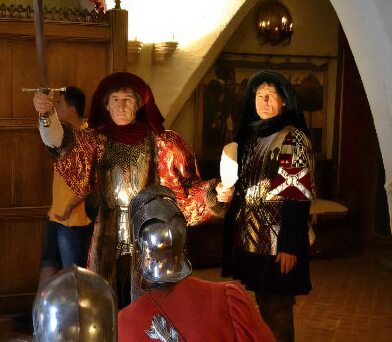 The castle remained in the hands of the Beauchamp family for almost 200 years. They rebuilt Warwick Castle, which had suffered severe damage during the attack by de Monfort's forces. The reign of King Edward III witnessed a great chivalric age and Warwick Castle hosted many grand tournaments, feasts, and banquets.

In the late fourteenth century, several major alterations were made to the structure of the castle including the addition of the great hall and domestic ranges, a water gate, improvements to the main gatehouse and the barbican in front of it.

Henry Beauchamp died in in 1446 without a male heir and the castle passed into the hands of his sister Anne Beauchamp who married Richard Neville, later known as 'Warwick the Kingmaker'.

Richard Neville, the 'Kingmaker' was one of the most powerful men of the late medieval era. He supported the house of York during the dynastic conflict known as the Wars of the Roses. Warwick later became alienated from his cousin King Edward IV and the two became bitter enemies, Warwick imprisoned Edward in Warwick Castle and attempted to rule in the king's name. Constant protests by the king's supporters forced the Earl to release the king. In 1471 the Kingmaker, who had then switched his allegiance to Margaret of Anjou and the House of Lancaster, was killed fighting for her cause at the battle at Barnet. 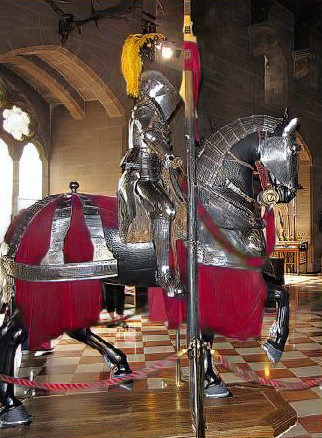 After Warwick's death the castle was inherited by Edward IV's brother, George Plantagenet, Duke of Clarence who was married Warwick's eldest daughter, Isabel Neville. Clarence was executed for treason in 1478, believed to have been drowned in a butt of malmsey wine in the Tower of London. After Clarence's death, the castle passed to his young son, Edward Earl of Warwick. As a potential heir to the English throne, Edward was arrested imprisoned in the Tower and later executed on the orders of the first Tudor king, Henry VII after attempting to escape.

Warwick Castle then came into the ownership of the crown. When the antiquary John Leland visited the castle sometime between 1535 and 1543, he recorded that-

Improvements carried out to the structure of the castle included a new roof on the kitchens, reinforcement of the south front, the building of Spy Tower and an extension to the State Rooms.

The castle, as well as lands associated with the earldom, remained in the control of the crown from 1478 until 1547 when they were granted to John Dudley with the second creation of the title the Earl of Warwick. Queen Elizabeth I visited the castle in 1566. When Ambrose Dudley died in 1590 the title of Earl of Warwick became extinct for the second time.

In November 1978, Warwick Castle was sold by the Greville family to the media and entertainment company The Tussaud's Group. Tussaud's opened the castle as a tourist attraction. and carried out extensive restorations to the castle and its grounds.

Fotheringhay-Mausoleum of the House of York