Isabella the 'She-Wolf of France'

Isabella the 'She-Wolf of France' 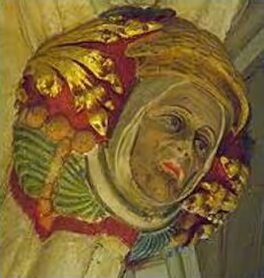 Isabella spent her early childhood in and around the Château du Louvre and the Palais de la Cité in Paris. She was cared for by Théophania de Saint-Pierre, her nurse and received a good education, developing a love of books, which was to remain with her throughout her life. Contemporaries also commented on her intelligence and charismatic personality. Like her father, King Philip IV, Isabella's beauty was commented on at the time. 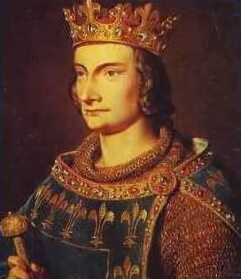 Phillip the Fair was known as "le Bel" (the Fair) due to his good looks, her mother Joan of Navarre was described by contemporaries as being a plump, plain woman. Isabella's brothers Louis, Philip and Charles all became kings of France in turn.

Isabella was engaged by her father to King Edward II of England whilst she was still a young child, the proposals were discussed as early as 1298 when Isabella was not yet three. Following lengthy delays due to disputes about the terms of the marriage contract, the pair were finally married at Boulogne-sur-Mer on 25th January 1308 when Isabella was twelve. Edward and Isabella were second cousins once removed, and shared common ancestors in Raymond Berenger, Count of Provence and his wife Beatrice of Savoy. Isabella's paternal great-grandmother, Margaret of Provence, Queen of France, was the sister of Edward's grandmother Eleanor of Provence. Isabella reintroduced the bloodline of the Saxon king, Harold II, into the English royal family. She was the granddaughter of Isabella of Aragon, the wife of Philip III of France. Isabella of Aragon's mother, Violant of Hungary, was a daughter of Andrew II of Hungary, a grandson of Géza II by Euphrosyne of Kyiv, herself a granddaughter of Harold's daughter Gytha, who married Vladimir II Monomakh of Kyiv.

Her husband was a handsome man but given to forming close romantic attachments with a series of male favourites. Edward was already in a relationship with the Gascon Piers Gaveston, Earl of Cornwall, at the time of the marriage. Their relationship had been established during the reign of Edward's father, Edward I "As soon as the King's son saw him, he fell so much in love that he entered up on an enduring compact with him." Edward I, who was often at loggerheads with his eldest son, was irate at the fact that Edward “had an inordinate affection for a certain Gascon knight”, he is said grabbed a handful of his son's hair, and pulled it out. He had banished Gaveston in an attempt to curb the affair, but soon after his father's death, Edward had recalled his lover, giving him the Earldom of Cornwall and marrying him to his niece, Margaret de Clare. Gaveston was arrogant, with a "reckless and headstrong" personality which Edward found attractive. Setting the tone for the future, Edward prefered to sit with his favourite rather than Isabella at their wedding celebration, which caused grave offence to her uncles Louis, Count of Évreux, and Charles, Count of Valois. To add insult to injury, Edward gave Isabella's jewellery to Gaveston, which he wore publicly. Tapestries were made for the coronation of the new King and Queen in February 1308 displayed the arms of the King and Gaveston.

Philip IV and his sons 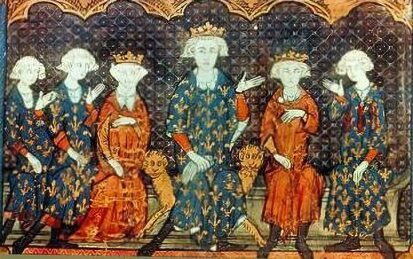 Opposition to the highly unpopular Gaveston, who openly poked fun at and had alienated many, began to build and was championed by Thomas Plantagenet of Lancaster, the cousin of Edward and Isabella's uncle on his mother's side. Philip IV, who Isabella wrote to of her ill-treatment, informing her father that "I am the most wretched of wives," and that Edward was "an entire stranger in my bed", sympathised with his daughter's plight and provided aid. This resulted in Gaveston being exiled to Ireland for a period but he eventually returned to England. Edward led a disastrous campaign against the Scots in 1311, during which Isabella only just evaded capture. The barons rose in revolt against Edward, signing the Ordinances of 1311, which promised action against Gaveston, the result was civil war. Gaveston was captured at Scarborough Castle, and executed by Guy de Beauchamp and Thomas of Lancaster.

The king's affections switched to the Despencer's, father and son. Isabella's first child, the future Edward III was born at Windsor Castle in 1312, three more children were to follow in the next ten years, John of Eltham, Earl of Cornwall (15 August 1316 – 13 September 1336), Eleanor, Countess of Guelders (18 June 1318 - 22 April 1355) and finally Joan, Queen of Scots (5 July 1321 – 7 September 1362). Tensions at court against the king and his ineffectual rule and male favourites continued to grow. The Scottish king, Robert the Bruce set about regaining the kingdom of Scotland. Edward led a new campaign into Scotland in 1314, which resulted in defeat at the Battle of Bannockburn, the encounter was to go down as one of the most resounding defeats in English history. The King of England was forced into a humiliating retreat back to England with the Scots hard at his heels. Edward was turned away from Stirling Castle and fled in haste to Dunbar from where he managed to obtain a boat back to England.

Hugh de Despenser the Younger became an increasing favourite of her husband and made enemies of their rival, the Marcher lord, Roger Mortimer of Wigmore. Lancaster, who was bitterly opposed to the Despensers, sent troops into London and demanded their exile. Edward was forced to comply. But took his revenge when the Despencer's later returned and struck back against the opposition, he forced the surrender of the Mortimers, Lancaster was captured and executed following the Battle of Boroughbridge.

Accompanied by Isabella, Edward led a further army north against the Scots, suffering an inglorious defeat at the Battle of Byland Moor in Yorkshire. The king sent his wife to Tynemouth Priory on the coast of North East England, then rode south, to raise recruits. With the Scottish army continuing to proceed south, Isabella, who was three months pregnant at the time, expressed concern about her safety and requested her husband's assistance. Edward continued to retreat south with the Despensers, leaving Isabella in a precarious position, being cut off from the south by the Scottish army. Isabella escaped by using a group of squires from her retinue to hold off the Scots while some of her knights commandeered a boat, the fighting continued as Isabella retreated onto the ship, two of her ladies-in-waiting were killed. The queen, furious, made her way to the safety of York. 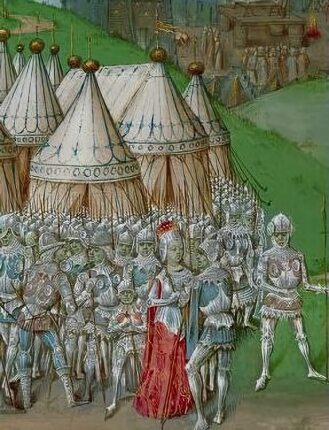 Her feelings toward Edward hardened from this point, at the end of 1322, Isabella left the court on a ten month pilgrimage around England. Tensions grew when she outrightly refused to take an oath of loyalty to the Despensers. Edward retaliated by confiscating her lands and her youngest children were taken from her and placed into the custody of the Despensers.

The deeply insulted queen was sent on a mission abroad to do homage to her brother, Charles IV, King of France for England's French possessions, along with her eldest son, Edward. There she plotted against her now despised husband and took Roger Mortimer, Earl of March, who had escaped from the Tower of London, as her lover. Her brother, Charles IV, refused to give military aid and was offended that his sister and Mortimer were open about their adulterous affair. Aid was obtained from Count William of Hainault and Prince Edward was betrothed to the count's daughter Phillipa of Hainault. They returned to England with an army, landing at Orwell on the east coast, they were joined by many disaffected nobles, including Thomas, Earl of Norfolk and Henry of Lancaster. Edward fled from London, Isabella and Mortimer besieged Bristol, which was being held for the king by Hugh de Despenser the Elder.

When the city fell, Isabella recovered her daughters Eleanor and Joan, Despenser the Elder was executed by his Lancastrian enemies, his body was hacked to pieces and fed to the local dogs. A huge crowd gathered to see Hugh Despenser the Younger die. They dragged him from his horse, stripped him, and scrawled Biblical verses against corruption and arrogance on his skin. He was then dragged into the city, and condemned to be hung, drawn and quartered. Edward II was captured and forced to abdicate. 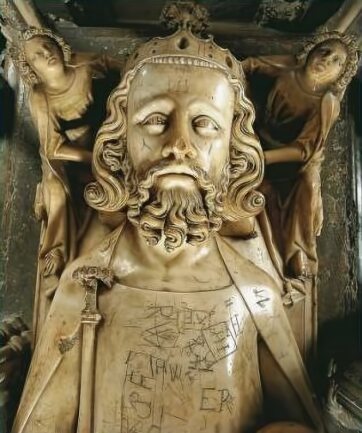 Edward was imprisoned firstly at Kenilworth and later removed to Berkeley Castle in Gloucestershire in January 1327, Thomas de Berkeley and Sir John Maltravers were appointed the ex-king's custodians. He was placed in a dungeon, into which was thrown filth and rotting animals, in the hope that he would contract some form of disease and die, thus removing from his captors the responsibility for his murder. Edward, an extremely fit man, continued to doggedly survive this treatment.

According to accepted belief, Edward was murdered in a bestial manner on the orders of Mortimer and Isabella around 11th October 1327. A red hot poker was inserted into his entrails using a horn, to leave no outward marks on his body. The people of Berkeley were said to have heard the agonised screams of the dying king outside the castle. This account of how Edward met his death is not, however, corroborated by any contemporary source and none of the directly contemporary chroniclers recorded with certainty how Edward II met his end, often citing suffocation or strangulation as the likely cause. The accepted version of Edward's horrific murder was first made public in the mid-1330s.

Isabella and Mortimer ruled England jointly for four years during the minority of Edward III but fell from power when Isabella's frustrated son led a coup to depose Mortimer, who was taken prisoner at Nottingham Castle. Despite Isabella's pleas of "Fair son, have pity on gentle Mortimer!" he was tried for treason and beheaded at Tyburn. Isabella was treated more leniently, she was initially transferred to Berkhamsted Castle and then held under house arrest at Windsor Castle until 1332 when she then moved back to her property of Castle Rising in Norfolk. It is said that Isabella suffered from a nervous breakdown following the death of her lover.

Isabella was very close to her daughter Joan, Queen of Scotland the two became more attached after Joan left her unfaithful husband, King David II of Scotland, son of Robert the Bruce. She is reported to have doted on her grandchildren, particularly Edward III's eldest son, Edward, the Black Prince. She received frequent visitors, including Roger Mortimer's daughter Agnes Mortimer, Countess of Pembroke, and his grandson, Roger Mortimer, Earl of March. Her relationship with her son Edward III improved and he and his children also visited her.

She developed an interest in religion as she grew older and made frequent visits to the shrine of St. Thomas Becket at Canterbury. Isabella took the habit of the Poor Clare Nuns before she died on 22nd August 1358, nursed before her death by her daughter, Joan. Isabella was buried at the Franciscan church at Newgate, London where Mortimer's body had been taken after his death. She was buried in her wedding dress and at her request, with Edward's heart, placed into a casket thirty years before. She left the bulk of her property, including Castle Rising, to the Black Prince, with some personal effects being given to her daughter Joan. Every year on the anniversary of her death, on Edward III's instruction, Isabella's tomb was dressed in cloth of gold and masses were said for her soul.

The Ancestry of Isabella of France

Paternal Great-grandfather: James I of Aragon

Mother: Joan I of Navarre

Maternal Grandfather: Henry I of Navarre

Maternal Great-grandfather: Theobald I of Navarre

Maternal Great-grandfather: Robert I of Artois

Thomas of BrothertonEarl of Norfolk PreviousNext The Mortimer Family