The Mortimers were a powerful aristocratic family of the Welsh Marches, centred around Wigmore Castle in Herefordshire, who from the fourteenth century held the title of Earl of March.

The surname is of Norman origin, and translates as 'stagnant lake' and is said to derive from either "Mortemer", the site of the Cistercian Abbaye de Mortemer at Lisors near Lyons-la-Forêt, close to Rouen or from the village of Mortemer further north in the Seine-Maritime, which predates the Abbey at Lisors by more than a hundred years. 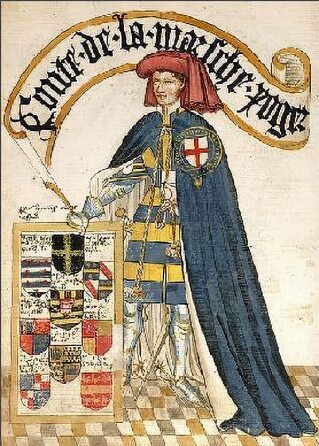 The family produced some colourful characters, one of its earliest recorded members is Ranulph de Mortimer, Seigneur of St. Victor-en-Caux in Normandy, who was granted lands in in Herefordshire and Shropshire before 1086 by William the Conqueror. Mortimer rose in rebellion against the Conqueror's successor William II 'Rufus' in 1088.

Ranulph's son, Hugh de Mortimer, rebuilt Cymaron Castle in 1144, however, Wigmore Castle remained the Mortimer's family's main home. His grandson, Hugh II Mortimer supported King Stephen during the Civil War known as the Anarchy. Stephen's successor, the first Plantagenet King Henry II besieged Hugh's three principal castles of Wigmore, Bridgnorth and Cleobury, the latter was destroyed during the siege. On 7 July 1155, Hugh formally submitted to Henry II at the Council at Bridgnorth. He was allowed to keep his own two remaining castles but Bridgnorth was returned to the crown.

Hugh's son Roger Mortimer of Wigmore fought for Henry II against the rebellion of his heir, Henry, the Young King. In 1179 Roger was instrumental in the killing of Cadwallon ap Madog, the prince of Maelienydd and Elfael. He was subsequently imprisoned until June 1182 at Winchester. Roger was succeeded by his second son, Ralph de Mortimer, who married the Welsh Princess Gwladus, daughter of Llywelyn ab Iorwerth and Joan Plantagenet, the daughter of King John.

They became the parents of Roger Mortimer, 1st Baron Mortimer, of Wigmore (1231 - 30 October 1282), who was a loyal ally of King Henry III. In 1256 Mortimer's cousin, Llywelyn ap Gruffydd invaded his lands of Gwrtheyrnion or Rhayader which led to war between the two, the war continued intermittently until the death of both Roger and Llywelyn in 1282. Mortimer also supported King Henry III in his war with Simon de Montfort, Earl of Leicester and fought at the Battle of Lewes in 1264. In 1265 Mortimer's wife, Maud de Braose helped rescue Prince Edward from the rebels leading to Mortimer and Edward allying against de Montfort. Mortimer killed Hugh Despencer and Simon de Montfort at the Battle of Evesham in August 1265. He died on 30 October 1282 and was buried at Wigmore Abbey, where his tombstone read:-

Here lies buried, glittering with praise, Roger the pure, Roger Mortimer the second, called Lord of Wigmore by those who held him, dear. While he lived all Wales feared his power and given as a gift to him all Wales remained his. It knew his campaigns, he subjected it to torment.'

Roger Mortimer, 1st Earl of March with Isabella of France and Prince Edward 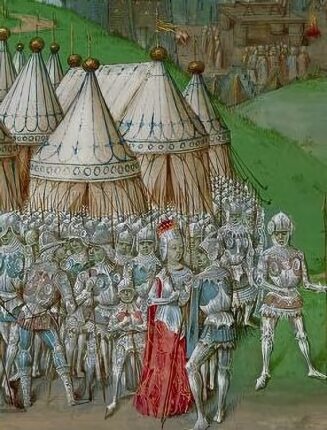 Roger's grandson, Roger Mortimer, 1st Earl of March (25 April 1287 - 29 November 1330) devoted the early years of his majority to obtaining effective control of his Irish lordships against his wife's relations, the Lacys, who summoned Edward Bruce, brother of Robert Bruce, King of Scots to aid them, Bruce was attempting to make himself king of Ireland. In 1316 Mortimer was defeated at Kells and withdrew to England, but afterward, as King Edward II's lieutenant in Ireland (November 1316), he was largely instrumental in defeating Bruce and in driving the Lacys from Meath.

Roger's dislike of the Despensers, favourites of Edward II, led him into violent conflict with them in South Wales in 1321. Roger and his uncle Roger Mortimer of Chirk were subsequently imprisoned in the Tower of London by the king. He managed to escape from the Tower in 1323 and fled to France, wherein 1325 he was joined by Queen Isabella, the estranged wife of King Edward II, known as the 'She-Wolf of France', who became his mistress. Together they invaded England in September 1326, the Despensers were executed and King Edward II deposed in favour of his young son Edward III. Mortimer was deeply implicated in Edward's subsequent murder at Berkeley Castle.

Mortimer now virtually ruled England in the name of the young king. He was created Earl of March in October 1328, but his insatiable avarice, his arrogance, and his unpopular policy toward Scotland aroused revulsion among his peers, and in October 1330 the young king Edward III, at the instigation of Henry of Lancaster, had him seized at Nottingham and taken to the Tower. Despite Isabella's pleas of "Fair son, have pity on gentle Mortimer!" he was tried for treason and beheaded at Tyburn as a traitor, his estates were forfeited to the crown. Isabella was treated more leniently, she was initially transferred to Berkhamsted Castle and then held under house arrest at Windsor Castle until 1332, when she then moved back to her property of Castle Rising in Norfolk. Mortimer's eldest son, Edmund de Mortimer (1306-1331) survived his father by only a year.

Roger's grandson, Roger Mortimer, 2nd Earl of March (11 November 1328 - 26 February 1360) had the family estates and title restored to him in 1354 and accompanied Edward III on an expedition to France. After his death his young son Edmund Mortimer 3rd Earl of March (1 February 1352 - 27 December 1381) became a ward of the crown and was married in 1368 at the age of 16 to the 13-year-old Philippa Plantagenet, the only child of Lionel of Antwerp, Duke of Clarence, the second son of Edward III. Philippa was third in line of succession to the throne after Edward, the Black Prince and his son, King Richard II, also inherited the title Countess of Ulster through her mother, Elizabeth de Burgh. Edmund and Phillipa's son, Roger Mortimer, 4th Earl of March and 6th Earl of Ulster (11 April 1374 - 20 July 1398) was considered the heir presumptive to King Richard II. Roger had a younger brother, Edmund Mortimer and two sisters, Elizabeth, who married Harry 'Hotspur' Percy, and Philippa (1375-1401). After he came of age, Mortimer spent much of his time in Ireland where King Richard appointed him his Lord Lieutenant. On 20 July 1398, at the age of only 24, Mortimer was slain in a skirmish at Kells. 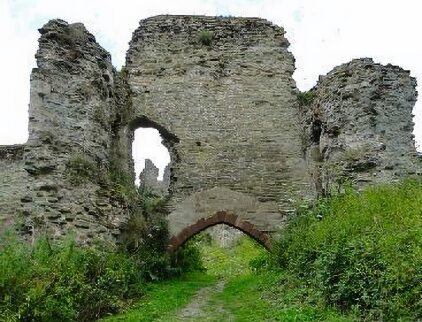 Edmund de Mortimer, 5th Earl of March and 7th Earl of Ulster (6 November 1391 - 18 January 1425), eldest son of the fourth earl, became in turn heir presumptive to King Richard II. Following Richard's deposition by the first Lancastrian king Henry IV in 1399, he became the focus of plots against the House of Lancaster. On 22 June 1402, Mortimer's uncle, Sir Edmund Mortimer, a son of the 3rd Earl, was captured at the Battle of Bryn Glas by the Welsh rebel leader, Owain Glyndwr. Henry IV was reluctant to pay the ransom demanded to release his cousin, leading Mortimer to ally with Glyndwr. Their alliance was cemented on 30 November 1402 when Mortimer married Glyndwr's daughter, Catrin, and on 13 December 1402 he proclaimed that his nephew, Edmund Mortimer, was the rightful heir to King Richard. Spurred on by various grievances, including the King's refusal to ransom Sir Edmund Mortimer, to whom they were related by marriage, in 1403 the Percy family rebelled against the King, Sir Edmund Mortimer's brother-in-law, Henry 'Hotspur' marched to Shrewsbury to confront a force under the command of Henry, Prince of Wales.

The army of Percy's father, the Earl of Northumberland was slow to move south and failed to rendezvous with the rebels at Shrewsbury by 21 July 1403, where the King was waiting with a large army. Hotspur himself was killed in the battle. On 13 February 1405 the young Edmund Mortimer and his brother, Roger, were abducted from Windsor Castle, but quickly recaptured near Cheltenham. Constance of York and Edward of Langley, the 2nd Duke of York, were arrested and imprisoned. Edmund and his brother were then placed under strict supervision at Pevensey Castle where they remained until 1409. In 1409 they were given into the charge of Henry, Prince of Wales and remained in custody for the remainder of Henry IV's reign.

On his accession to the throne in 1413 Henry V released Mortimer. During preparations for Henry's invasion of France, Richard, Earl of Cambridge, who was married to Edmund's sister Anne Mortimer, made plans, now referred to as the Southampton Plot to place Edmund on the throne. Edmund however, revealed the conspiracy to the King and served on the commission which condemned his brother-in-law to death. He later accompanied Henry V France, taking part in the siege of Harfleur. In 1416 he was appointed a captain of the expedition sent to relieve Harfleur under John of Lancaster, 1st Duke of Bedford, and Sir Walter Hungerford, and was with the army which conquered Normandy in 1417 and 1418. He fought again in France with Henry V in June 1421, and was at the Siege of Meaux, shortly before Henry V's death from dysentery at Vincennes on 31 August 1422. During the reign of Henry VI, Mortimer was sent to Ireland and on 18 or 19 January 1425, he died of plague at Trim Castle in Meath.

Edmund's marriage to Anne Stafford produced no issue, and on his death the male line of the Mortimer Earls of March became extinct. His title and estates were inherited by Richard Plantagenet, 3rd Duke of York (1411-1460), the son of his sister, Anne, and Richard, Earl of Cambridge and were later used by their grandson Edward IV.

Isabella of France PreviousNext Edmund of WoodstockEarl of Kent