Joan of Wales, known as Siwan to the Welsh, was born circa 1191, the illegitimate daughter King John of England, her mother is not known with certainty, but may have been Clemence Pinel. Joan was brought up in Normandy until in 1205 her father her marriage to the Welsh Prince, Llywelyn the Great of Gwynedd. In May 1206 and at the age of 15, Joan was married to Llywelyn at Chester. 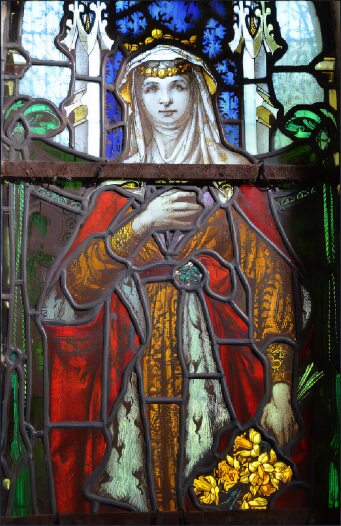 The marriage of Joan and Llywelyn appears to have been a happy one, they had at least two children together, a daughter, Elen ferch Llywelyn (1207-1253), who was married firstly to John the Scot, Earl of Chester and secondly, Robert II de Quincy and a son, Dafydd ap Llywelyn (c. 1212-1246). Some of Llywelyn's other recorded children, Gwladus Du, Susanna, Angharad and Margaret may also have been Joan's.

In April 1226 Joan obtained a papal decree from Pope Honorius III, declaring her legitimate on the basis that her parents had not been married to others at the time of her birth, but without giving her a claim to the English throne.

Joan indulged in an affair with William de Braose, 10th Baron of Abergavenny, a Norman marcher lord. De Braose was hated by the Welsh, who referred to him as Gwilym Ddu or Black William.

In 1228 he was captured by Llywelyn's forces near Montgomery but was ransomed. Llywelyn and Braose arranged the marriage Braose's daughter Isabella to Llywelyn's only legitimate son and heir, Dafydd, with the lordship and castle of Builth as her marriage dowry. However, at Easter 1230, he discovered Braose with Joan in her bed-chamber "in the dead of night".

As news of the scandal spread across Wales and the Marches “the enemies of his house hastened from every quarter to see this scone of a hated stock brought to his account, even had Llywelyn been in the mood to resist the tide of popular passion, he might have found it hard to withstand the demand that William should die." Llywelyn had William de Braose hanged from a tree in a field behind this palace of Garth Celyn in Abergwyngegyn on 20 May 1230.

The Coffin of Joan Lady of Wales at Beaumaris, Anglessey 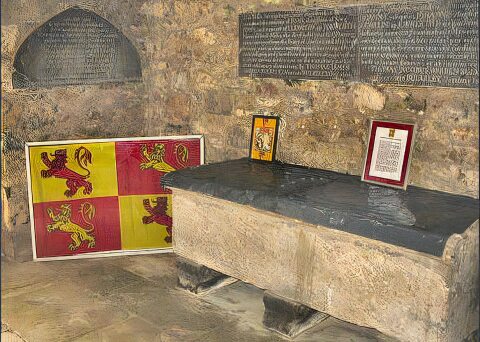 Joan was imprisoned in a tower at Garth Celyn, where she remained for twelve months. Llywelyn later forgave her and was reinstated as Lady of Wales. The marriage of Isabella de Braose and Dafydd, the future Prince of Wales, went ahead as planned in 1230. Joan may have given birth to another daughter early in 1231.

Joan of Wales died at the royal palace of Abergwyngregyn, on the north coast of Gwynedd, in February 1237. Llywelyn's great grief at her death was recorded at the time. Llywelyn founded a Franciscan Friary near the shore of Llanfaes in her memory, where Joan was buried. The Friary was consecrated in 1240, just a few months before Llywelyn's death in April of the same year.

The Friary was destroyed in 1537 during the dissolution of the monasteries and Joan's tomb was desecrated. The whereabouts of the coffin were unknown for many years until it was found in the town of Beaumaris, Anglesey, where it was being used as a horse trough.

Today Joan's huge stone coffin lies on the church porch at Beaumaris Church. The effigy depicts Joan's head and shoulders, wearing a wimple and a coronet, with hands raised in prayer. Above the empty coffin is a slate panel inscribed: "This plain sarcophagus, (once dignified as having contained the remains of Joan, daughter of King John, and consort of Llewelyn ap Iowerth, Prince of North Wales, who died in the year 1237), having been conveyed from the Friary of Llanfaes, and alas, used for many years as a horse watering trough, was rescued from such an indignity and placed here for preservation as well as to excite serious meditation on the transitory nature of all sublunary distinctions. By Thomas James Warren Bulkeley, Viscount Bulkeley, Oct 1808"