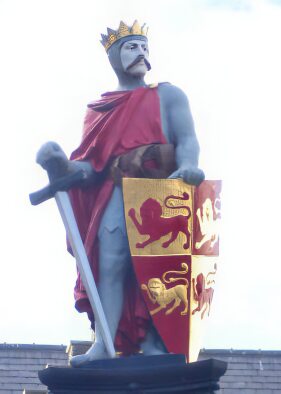 Llywelyn the Great, most famous of the native Welsh Princes, also known as Llywelyn Fawr or Llywelyn ab Iorwerth was born around 1173 at Dolwyddelan, although not in the present structure of that name but an older castle which was situated at the base of the Lledr Valley. He was the son of Iorwerth ap Owain, Prince of Gwynedd and Marared, daughter of Madog ap Maredudd, Prince of Powys.

Although Llywelyn's father, Iorwerth, who may have died when he was but an infant, was the only legitimate son of Owain Gwynedd, the kingdom had been taken and divided by his illegitimate uncles, Dafydd and Rhodri ab Owain by 1175. Dafydd ruled the area east of the River Conwy while Rhodri held the west. The young Llywelyn rose in arms against them to recover his birthright. He lead a successful coup against Dafydd and defeated him in battle, Rhodri died in 1195 after which Dafydd was taken prisoner by his nephew and eventually banished.

Since the death of Llywelyn's grandfather, Owain Gwynedd in 1170, Deheubarth, ruled by Rhys ap Gruffydd had been considered the major Welsh principality, however, following his death, fighting between his sons led to the weakening and eventual division of the principality. Gwenwynwyn ab Owain, prince of Powys Wenwynwyn, attempted to assume leadership of the Welsh princes, aided by troops provided by Llywelyn, he besieged Painscastle, held by the Norman baron, William de Braose, but the attempt met with defeat.

In 1199 Llywelyn took the castle of Mold and assumed the title of prince of North Wales. In 1205 whilst he was fighting to recover his French territories, King John of England married his illegitimate daughter, Joan, then aged around fifteen, to Llywelyn. An astute political manipulator, Llywelyn then did homage to John for all his Welsh possessions. Joan was John's daughter by a mistress known only as Clemence. In 1208. Gwenwynwyn of Powys had a serious disagreement with John who consequently had him arrested and stripped him of his lands. Llywelyn seized his opportunity and annexed southern Powys and northern Ceredigion.

In 1209 Prince Llywelyn accompanied John on his campaign into Scotland. Llywelyn went on to steadily increase his influence in Wales and conquered southern Powys in 1208. John became concerned at the growth of his son-in-law's power and viewed it as a threat to his own authority in the province. When Llywelyn attacked the lands of the Earl of Chester in 1210, John threw his support behind the latter.

King John marched into Wales with an army, receiving the support of many of the other Welsh princes, he marched toward Deganwy. Llywelyn's army employed the classic guerilla tactic of retreating to the hills, and taking the supplies with them. John as had made no provision for supplying Deganwy Castle by sea, and was therefore forced to return to England or face starvation.

John returned to Wales within three months, with a well provisioned army, crossing the River Conway with his army he encamped on the Menai Strait, penetrating deep into the heart of Gwynedd. Llywellyn sent his wife, Joan, John's daughter, to sue for peace. The king imposed humiliating terms on his son-in-law, and annexed the area of North Wales known as the Four Cantrefs, installing Gerard d'Athée and two other mercenary captains into the southern marches. 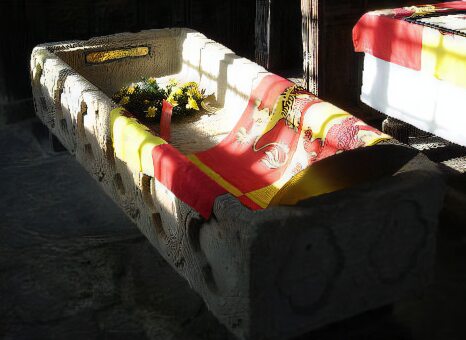 Llywelyn capitalized on growing Welsh resentment against John, and led a revolt against him, which received the blessing of Pope Innocent III. By 1212 Llywelyn had regained the Perfeddwlad and burned a castle erected by John at Ystwyth.

Llywelyn's revolt delayed John's planned invasion of France, Llywelyn formed an alliance with John's enemy, King Phillip II Augustus of France, later allying himself himself with the discontented English barons who were in rebellion against him. In 1215 he marched on Shrewsbury and captured the town with little resistance. Over the following three years Llywelyn extended his power base into South Wales, becoming without doubt the single most powerful figure in Wales.

Llywelyn was never however, to rule in peace, in 1223 the Earl of Pembroke attacked Wales, taking Cardigan and Carmarthen, Llywelyn sent an army against him which was placed under the command of his son Gruffudd. Gruffudd's expedition did not meet with success and the dispute was to continue for many years. On the death of the Earl of Pembroke in 1234, Llywelyn forged an alliance against King Henry III of England with the new Earl. A truce was arranged with the English king.

Lllywelyn acquired an ally in William de Braose, Baron Abergavenny and a marriage was arranged between Braose's daughter Isabella and Llywelyn's son , Dafydd ap Llywelyn. William visited Llywelyn at his court of Garth Celyn in Easter, 1230. During which time he was discovered in a compromising position with the prince's wife, Joan. Llywelyn had him hanged for the offence and Joan placed under house arrest for a year. The marriage, however, still proceeded and a year later Joan was restored to her position.

Princess Joan died in 1237 at Garth Celyn and Llywelyn suffered a paralytic stroke later in the same year. He died at the Cistercian Abbey of Aberconwy, his own foundation, on 11th April, 1240 and was buried there. His stone coffin was later removed to the parish church of Llanwrst, where it can still be seen.