Hywel Dda 'the Good' is one of the outstanding figures in early Welsh history. Hywel was born in around 880, the son of King Cadell of Seisyllwg. Cadell had been appointed as King of Seisyllwg by his father, Rhodri the Great of Gwynedd, who became steward of Seisyllwg following the death by drowning in 872 of his brother-in-law, Gwon, the last king of Seisyllwg. King Cadell died around 911, after which his lands were divided between his two sons Hywel and Clydog. 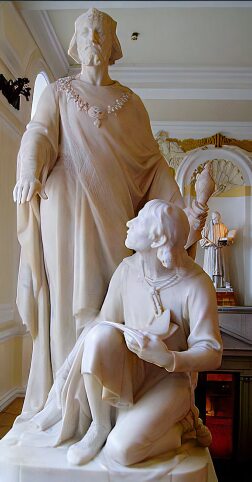 Evidence exists to suggest Hywel ordered the murder of his brother-in-law, Llywarch, in order to take control of Dyfed. Hywel is said to have married Elen, the heiress of King Llywarch of Dyfed, to justify his rule over the province and later inherited his father's lands in Ceredigion. Hywel and his brother Clydog ruled Seisyllwg jointly after their father's death and submitted to the Saxon king Edward the Elder, the son of Alfred the Great, in 918. Clydog died in 920, leaving the whole realm to Hywel, after which he joined Seisyllwg and Dyfed into a single kingdom, Deheubarth.In 928.

Hywel went on a pilgrimage to Rome in 928, the first Welsh prince to do so. On his return to Wales, he forged close relations with King Athelstan of England, the son of Edward the Elder. Athelstan planned to secure the submission of all other kings in Britain. Hywel used his submission to Athelstan to his advantage, later in his reign, he was able to leverage his close association with Athelstan and the English crown to great effect in his ambitions in Wales.

In 942 Hywel's cousin Idwal Foel, King of Gwynedd, determined to cast off English overlordship, rebelled against the new English king, Edmund the Elder. Consequently, both he and his brother Elisedd were slain in battle against English forces.

The Laws of Hywel Dda 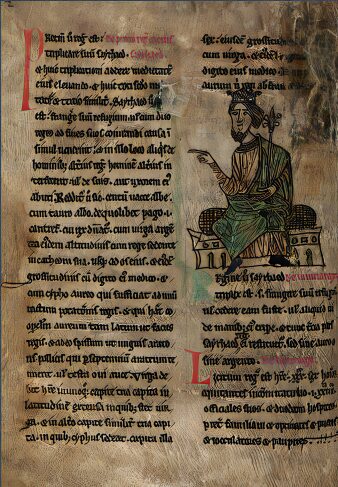 Although Idwal's lands should have been inherited by his sons, Hywel intervened. He sent Iago and Ieuaf into exile and established himself as ruler over Gwynedd, which also placed him in control of the Kingdom of Powys, which was under the authority of Gwynedd. Hywel thereby became king of nearly all of Wales except for the southern provinces of Morgannwg and Gwent and claimed the title "King of all Wales"...

Hywel's study of legal systems and his pilgrimage to Rome of 928 had combined to enable him to formulate advanced ideas about law. A comparative study of law and lawmaking at the time reveals a deep concern for law and its documentation throughout Europe and also the Islamic world, the Cordoba Islamic Law translation schools being a fine example, from Greek to Arabic to Latin.

Hywel was responsible for the creation of Wales' first formal legal system. The Hywel Lawbook or cyfraith Hywel was written partly in Latin, about laws of court, law of country and the law of justices. During a conference held circa 940 – 945at Ty Gwyn ar Daf, at Hywel's residence near Whitland in Carmarthenshire, Welsh law was codified and set down in writing for posterity. The council had the purpose of compiling and enacting the code of laws, which are still known as "the Laws of Hywel the Good." These laws were not Hywel's invention, but traditional rights and duties, some already dating back hundreds of years, which were written down or "codified" for the first time.

Legal documents drafted according to the "Laws of Hywel Dda" still survive to the present day. One of the most interesting features of these laws is their recognition of the legal status of women and children. In other areas of Europe, women were regarded merely as the property or chattels of men, a status that continued to persist for centuries after.

Tradition states that much of the work was done by the celebrated clerk, Blegywryd. After being drawn up at Ty Gwynhe the Laws of Hywel were deposited at Dinefwr Castle later in the tenth century. Hywel's reign was a violent one, but he achieved an understanding with Athelstan of England whereby Athelstan and Hywel ruled part of Wales jointly. Such was the relationship between the neighbouring countries that Hywel was able to use Athelstan's mint at Chester to produce his own silver pennies, the first Welsh ruler to do so for at least a thousand years.

Hywel Dda died in 950 after which his kingdom was divided between his sons Owain, Rhodri and Edwin. Gwynedd was reclaimed by the sons of Idwal Foel, while Deheubarth was divided between Hywel's sons. However, his legacy endured in the form of his laws, which remained in active use throughout Wales until the appointed date of implementation of the Laws in Wales Acts 1535-1542 of King Henry VIII of England.