Rhodri ap Merfyn hailed as Rhodri Mawr or Roderick the Great, a distinction held by only two other rulers in the same century, Charles the Great of France (Charlemagne, died 814) and Alfred the Great of England (died 899). Rhodri was the first ruler to unite Wales and provide the country with a sense of national identity.

Rhodri Mawr was born circa 820, the son of Merfyn Frych (the Freckled) ap Gwriad, who had claimed Gwynedd upon the extinction of King Cunedda's male line. Merfyn was linked to the earlier dynasty through his mother Esyllt, the daughter of King Cynan (died 816), rather than through his father Gwriad ap Elidyr. He was a native of "Manaw" which may either refer to the Isle of Man or Manau, the ancestral homeland of all Gwynedd's kings since Cunedda. Rhodri inherited Gwynedd after the death of his father's which occurred in around 844. 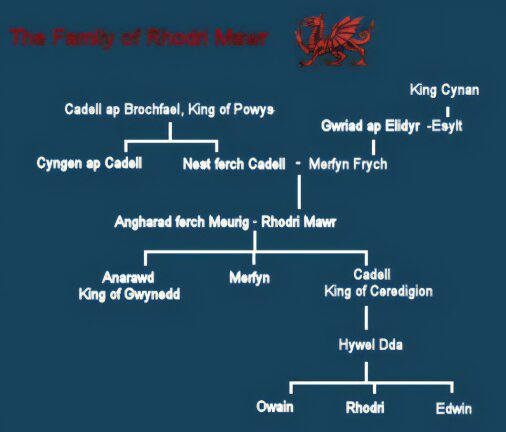 Rhodri's mother was Nest daughter of Cadell ap Brochwel of the ruling dynasty in Powys, this descent from Nest was later used to justify Gwynedd's annexation of Powys after the death of Cyngen ap Cadell in around 855, excluding Cyngen's other heirs. Rhodri's marriage to Angharad ferch Meurig was similarly used to justify his inheritance of her brother Gwgon's kingdom of Ceredigion after his death in 872.

Now the ruler of much of Wales, the Annals of Ulster refer to Rhodri as "King of the Britons", he was ruler of a realm stretching from Anglesey to the Gower peninsula, but faced pressure both from the English and, increasingly, from Vikings, known as the "black gentiles" in Welsh sources. The Vikings ravaged the Isle of Anglesey in 854.

Rhodri"s fame sprang from his success as a warrior after his many battles with the Vikings. In 856, he won a decisive victory over the invaders and killed their leader Gorm. The Chronicle of the Princes records two victories by Rhodri in 872: the first at a place which is named variously as Bangolau, Bann Guolou, or Bannoleu, where he defeated the Vikings on Anglesey, and the second at Manegid or Enegyd where the Vikings "were destroyed". 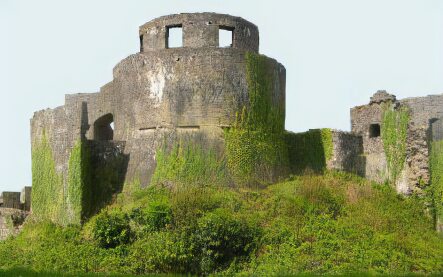 The English posed an equal threat to Rhodri's realm. The English kings of Mercia made several attempts to take Powys, meeting with temporary success in 822. Rhodri Fawr is thought to have built the first fort at Dinefwr Castle. Although Offa's Dyke had been built to define the territories of the Welsh and the English, this did not prevent the successors of Offa from launching attacks on Wales. Seven years later Mercia itself succumbed to the growing might of the Saxon kings of Wessex, whereafter Wessex, ruled by King Alfred the Great presented a potent threat to the cause of Welsh independence.

The date of Rhodri's death is not known with certainty, the Chronicle of the Princes records his death occurring at the Battle of Sunday on Anglesey in 873, the Annals of Wales record the two events in different years and Phillimore's reconstruction of its dates places Rhodri's death in 877.

According to the Chronicle, Rhodri and his brother Gwriad were killed during an Anglo-Saxon invasion of Wales (which probably would have been led by Ceolwulf of Mercia, since that the forces of Wessex forces under Alfred the Great were fighting Vikings in East Anglia at the time. He was likely killed in battle given that all the sources call his son Anarawd's victory over the Mercians at the Battle of the Conwy a few years later "God's vengeance for Rhodri".

Following Rhodri's death, his eldest son, Anarawd ap Rhodri, became king of Gwynedd and the head of the subsequent House of Aberffraw. Another son, Cadell, inherited Ceredigion and killed his brother Merfyn to claim Powys as well. Both were eventually forced to acknowledge Alfred the Great as their overlord. Rhodri's grandson Hywel Dda built on the foundations he had laid, creating the kingdom of Deheubarth.

The honours of the principality of Wales PreviousNext Hywell Dda