The honours of the principality of Wales

The honours of the principality of Wales are the Crown Jewels used at the investiture of the Princes of Wales. They include a coronet, a rod, a ring, a sword and a mantle.

Amongst them is the crown made in 1728, for Frederick Lewis, the son of George II, who predeceased his father. A new set of insignia was made for the 1911 investiture of Edward, Prince of Wales, the future Edward VIII. Made from Welsh gold with the Welsh dragon pictured on the ring, the rod and the sword

The Prince of Wales crown, made for the 1969 investiture of Prince Charles. 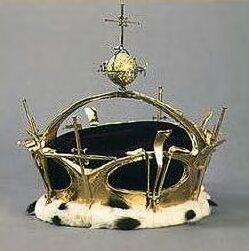 These were re-used at the investiture of Prince Charles in 1969, although a new crown was made for the occasion. Made by a technique of applying gold to a resin base, it has four crosses and four fleur-de-lis, in keeping with the design issued by a warrant of Charles II in 1672.

The original crown jewels of the native Welsh princes have now been lost. Llywelyn ap Gruffudd, Prince of Gwynedd, known as 'Llywelyn the Last', deposited his crown and other items, such as the Cross of Gneth, said to be a fragment of the True Cross, at Cymer Abbey for safekeeping at the commencement of his final campaign in 1282. He was killed in battle by the forces of Edward I later that year. He was succeeded by his brother, Dafydd, whose reign was extremely brief, he was killed not long after his brother, without ever having been able to reclaim the precious items from Cymer Abbey. They were later seized by Edward I and taken to London to be presented at the the Shrine of Edward the Confessor in Westminster Abbey.

It is said that the Cross of Gneth was brought back from the Holy Land by a Priest called Neotus, who carried it to Wales. King Edward II kept the relic at the Tower of London but King Edward III presented it to St George's Chapel at Windsor soon after he had founded the Order of the Garter. The relic disappeared in the sixteenth century.

The theft of the Crown Jewels