Owain Gwynedd, the second son of Gruffudd ap Cynan, Prince of Gwynedd and Angharad ferch Owain, the daughter of Owain ab Edwin of Tegeingl was born around the year 1080, probably on the Isle of Anglesey, which his father had established as his power base.

Owain and his brothers Cadwallon and later Cadwaladr led the forces of Gwynedd against the Normans and other Welsh princes with success. His elder brother Cadwallon met his death in battle in 1132, which left Owain as his father's heir. Owain and Cadwaladr, in alliance with Gruffydd ap Rhys of Deheubarth, met the Normans in battle at Crug Mawr, located around two miles from Cardigan, in 1136. After fierce fighting, the Normans were pushed to flee, pursued by the Welsh as far as the River Teifi. As the Norman forces attempted to cross the bridge, it collapsed under their weight, resulting in hundreds being drowned. Others fled to Cardigan, which was captured by Owain's forces and burned, though Robert Fitz Martin successfully managed to hold the castle, it was the only one remaining in Norman hands at the end of the rebellion. Ceredigion, which had been part of Deheubarth before the Normans had conquered it, was annexed to Gwynedd. 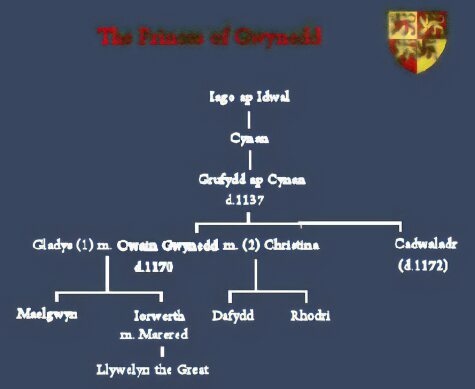 On Gruffydd ap Cynan's death in 1137, Owain inherited a portion of his kingdom of Gwynedd, which then covered most of north Wales, but as Welsh custom decreed, had to share it with his brother Cadwaladr. In 1143 Cadwaladr was involved in the murder of Anarawd ap Gruffydd of Deheubarth, Owain responded by sending his son Hywel ab Owain to take his lands in the north of Ceredigion. From 1143, Owain ruled alone over most of north Wales, Cadwaladr was driven into exile in 1155. The premature death of his favourite son Rhun ap Owain in 1147, plunged Owain into a deep melancholy.

A bitter state of civil war existed in England as the cousins Stephen and Matilda fought each other for possession of the crown, Owain took advantage of the situation to extend Gwynedd's frontiers. In 1146 he took the castle of Mold and about 1150 captured Rhuddlan Castle and encroached on the borders of Powys. He defeated the Prince of Powys, Madog ap Maredudd, who was aided by the Norman Ranulf, Earl of Chester, in battle at Coleshill. 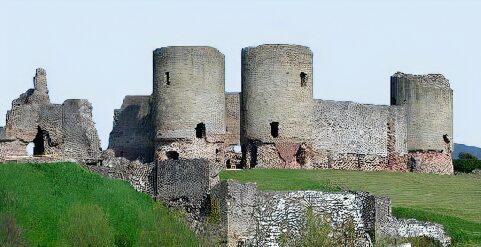 Stephen's successor, Henry II invaded Gwynedd in 1157 with the support of Madog ap Maredudd of Powys and Owain's exiled brother Cadwaladr. Henry's army ravaged eastern Gwynedd, the two armies met at Ewloe. Owain's forces ambushed the English army in a narrow, valley, routing it completely, the King of England himself narrowly avoiding capture. Owain was eventually forced to come to terms with Henry, had to surrender Rhuddlan along with other conquests in the east and was required to render homage to Henry.

Madog ap Maredudd died in 1160, which allowed Owain to regain territory in the east. Six years later, the Council of Woodstock attempted to reduce the status of the Welsh princes to that of dependent vassalage, which led to a subsequent uprising led by Owain Gwynedd and Rhys ap Gruffydd of south Wales. In 1163 he allied with Rhys ap Gruffydd of Deheubarth to challenge English rule. King Henry again invaded Gwynedd in 1165, but did not follow the usual route along the northern coast, Henry's army invaded from Oswestry and took a route over the Berwyn hills. The invasion was met by an alliance of all the Welsh princes, led by Owain. Apart from a small melee at the Battle of Crogen little fighting occurred, as torrential rain forced Henry to retreat. The infuriated Henry mutilated several Welsh hostages, two of which were Owain's sons. Owain was able to regain his eastern conquests, recapturing Rhuddlan castle in 1167 following a siege of three months. In 1168 he engaged in negotiations with Louis VII of France to form an alliance between Gwynedd and France against their common enemy, the English.

For the last years of his life, Owain was engaged in disputes with Thomas Becket, Archbishop of Canterbury, their quarrel centred on the appointment of a new Bishop of Bangor, Owain had his nominee, Arthur of Bardsey, elected, which Thomas refused to accept, Owain accordingly had Arthur consecrated in Ireland. The quarrel was not resolved and the see remained officially vacant until well after Owain's death. Beckett, with the support of the Pope, objected to Owain's second wife, Christina, the daughter of Gronw ap Owain, who was his first cousin, this close kinship rendering the marriage invalid under church law which led to his ex-communication when he refused to put his wife aside.

Owain died in 1170, despite having been excommunicated, he was interred in Bangor Cathedral. After his death, a civil war broke out between his sons. Owain was married twice, his first wife Gwladys ferch Llywarch ap Trahaearn, was the mother of two of his sons, Maelgwn ab Owain Gwynedd and Iorwerth Drwyndwn, the father of Llywelyn the Great, by Christina, his second wife he had three sons including Dafydd ab Owain Gwynedd and Rhodri ab Owain Gwynedd. He also had several illegitimate sons, who by Welsh law had an equal claim on the inheritance if acknowledged by their father. This feuding did not end until his grandson Llywelyn ab Iorwerth (Llywelyn the Great), became prince of Gwynedd.