Dafydd ap Llywelyn was the son of Llywelyn the Great and his wife, Joan Lady of Wales, the illegitimate daughter of King John of England, known to the welsh as Siwan, was born shortly after Easter 1212 at Castell Hen Blas, Coleshill, Bagillt in Flintshire. 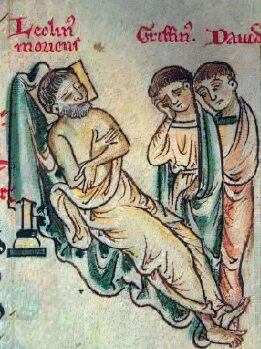 At the time of Dafydd's birth his English grandfather, King John was engaged in a struggle with his rebellious barons. Toward the end of his life, Dafydd's father, Llywelyn made vigorous attempts to have him accepted as his sole heir. By Welsh law, Llywelyn's older son, Gruffydd, born to his mistress Tangwystyl, had a claim to be Llywelyn's successor. Dafydd was recognised as Llywelyn's heir by his uncle King Henry III of England in 1220, Dafydd's mother Joan was declared to be legitimate by the Pope to strengthen her son's position. 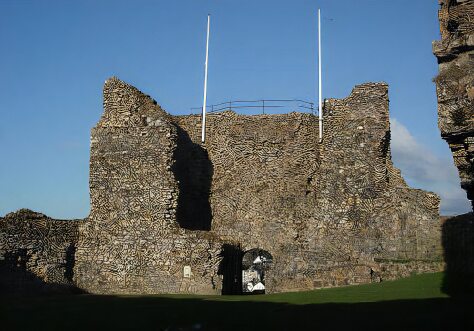 On 19 Oct. 1238, the lesser princes of Wales swore fealty to Dafydd at Strata Florida Abbey. Dafydd captured Gruffydd and his son Owain, whom he imprisoned in Cricieth Castle. In 1230, Dafydd's marriage was arranged to Isabella de Braose, eldest daughter of the Marcher lord William de Braose and Eva Marshall, who had been captured in fighting at Ceri near Montgomery in 1228.

Although William was later hanged by Llywelyn's men Gwern y Grog, after being discovered to be the lover of Princess Joan, Llywelyn wrote to William's widow Eva and her brother William Marshal, 2nd Earl of Pembroke, who was now guardian to Isabella and her sisters, of his wish for the marriage to continue and the marriage proceeded as planned, through it Llywelyn acquired Builth. Joan remained imprisoned for her offence for twelve months. After which the couple became reconciled and Llywelyn took Joan back as his wife, restoring her title as Lady of Wales.

Dafydd lost one of his most influential supporters when his mother Joan died at Abergwyngregyn in 1237, but retained the support of Ednyfed Fychan, the Seneschal of Gwynedd, who wielded strong political influence. Llywelyn the Great suffered a paralytic stroke in 1237, which led to Dafydd taking an increasing role in government.

On the death of his father in 1240, Dafydd succeeded him as ruler of Gwynedd. On 15 May he met his uncle Henry III at a great assembly at Gloucester, Henry knighted Dafydd, who rendered him homage for Gwynedd. Although Henry accepted his nephew's position as Prince of Gwynedd, he was not disposed to allow him to retain his father's conquests outside Gwynedd.

As the relationship between uncle and nephew deteriorated, Dafydd sent ambassadors to the court of King Louis IX of France in an attempt to form an alliance between France and Gwynedd. In August 1241, Henry invaded Gwynedd and forced his nephew into submission. Under the terms of the Treaty of Gwerneigron, signed near St. Asaph on 29 August, Dafydd had to relinquish all his lands outside Gwynedd, and surrender his half-brother Gruffydd ap Llywelyn to the English king, who was imprisoned in the Tower of London. Gruffydd later fell to his death in March 1244 while attempting an escape from the Tower by climbing down knotted sheets.

Dafydd allied himself with other Welsh princes to attack English possessions in Wales. He experienced successes in the north of Wales and by March 1245 Dafydd had recovered the castle of Mold along with his former possessions in Flintshire. In August 1245 the English King Henry invaded Gwynedd again, Henry proceeded as far west as the River Conwy and began the construction of a new castle at Deganwy. Dafydd entered into negotiation with Pope Innocent IV, which resulted in the Vatican recognized his right to rule North Wales. This decision was, however, reversed in 1245. Fighting continued at Deganwy until Henry ran short of provisions, after which a truce was agreed upon and Henry's army returned to England in the autumn.

Dafydd died at Abergwyngregyn, in February 1246. He was buried with his father at the abbey of Aberconwy. The writer of Brut y Tywysogyon described him as 'tarian Cymru' - the shield of Wales. The poet Dafydd Benfras composed an elegy in his honour.

Since Dafydd's marriage to Isabella de Braose had failed to produce children, he was succeeded by his nephew, Llywelyn ap Gruffydd.