In January 1476, John Mowbray, fourth duke of Norfolk, died suddenly at his great castle in Framlingham aged 31, leaving only his wife and a three-year-old daughter, Lady Anne, who, as a female, was not allowed to hold a dukedom in her own right. Anne, being a minor, became the ward of King Edward IV, who, as soon as he was able, married her off to his own younger son Prince Richard, Duke of York, whom he also made Duke of Norfolk in a new creation. Betrothal at so young an age was by no means unusual, but this was a real marriage ceremony between a little girl of five years and five weeks and a boy of four. 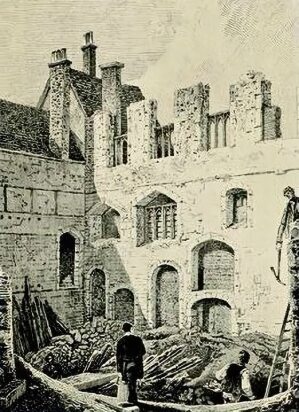 The wedding was a magnificent affair that took place at St Stephen's Chapel in the Palace of Westminster on a chilly January day in 1478. The tiny couple had to go through hours of ritual, totally incomprehensible to them, before Anne was finally led from the altar by her new uncle-by-marriage, Richard, Duke of Gloucester, then aged twenty-five. The day after the wedding the King's reason for moving so quickly became abundantly clear when parliament passed legislation allowing the new husband to keep the Mowbray fortune for his lifetime should Anne die childless.

Anne Mowbray, referred to at her marriage as 'the high and excellent princess' died in November 1481 just short of her ninth birthday and, as planned, her widower was to keep her fortune in land and property for his lifetime. However, the story unfolded very differently from what had been expected, with the King dying suddenly in the spring of 1483 and Prince Richard disappearing the following autumn with his brother, the uncrowned Edward V. Richard, Duke of Gloucester, the boys' uncle, became King Richard III and restored the Mowbray inheritance and titles to Anne's rightful heirs.

In December 2014 it will be half a century since the lead-encased body of Anne Mowbray, Duchess of York and Norfolk was discovered on a building site north of the Tower of London, two miles from her supposed resting place at Westminster Abbey. The 1964 discovery caused worldwide interest, but within a few weeks, Lady Anne was once more consigned to the mists of oblivion. The catalogue of unfortunate errors associated with the removal of her remains from the site without an exhumation licence having been issued, and the manner of their subsequent scientific examination, caused an outcry among some leading Establishment figures of the day, and the child had to be reburied, swathed in material provided by the John Lewis Department Store, before the examinations of her skeleton were completed.

Drawing of 1796 showing what was left of the Abbey of the Minoresses, or Poor Clares, north of the Tower after a huge fire; it was here in a forgotten vault that demolition workers found Anne Mowbray's body in 1964.

Forty-eight years later Richard III's remains were found in a Leicester car park and it would appear that the lessons of Anne Mowbray's discovery had either been ignored or not fully appreciated at the highest official level. There was a valid exhumation licence this time, but loose ends, legal loopholes and a lack of understanding of the strong feelings between rival factions have resulted in King Richard's reburial having to be scheduled for March 2015, more than two and a half years after he was discovered.