Edward Courtenay was born around 1527, the son of Henry Courtenay, 1st Marquess of Exeter and his second wife, Gertrude Blount, who was the daughter of William Blount, Baron Mountjoy and a loyal friend of Henry VIII's first wife Catherine of Aragon. Edward's father Henry Courtenay was the son of William Courtenay, 1st Earl of Devon, and Catherine of York, the daughter of King Edward IV and his queen, Elizabeth Woodville and a younger sister of the Queen, Elizabeth of York. 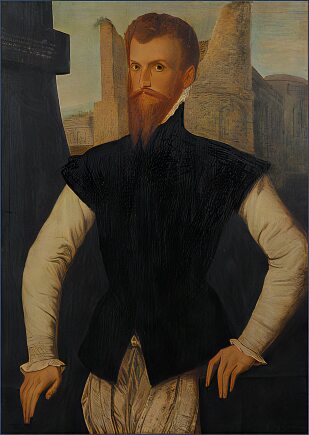 The formidable King Henry VIII accused his first cousin Henry Courtenay of entering into a conspiracy with the exiled Reginald Pole, who had spoken out publicly against Henry's policies. In November, 1538, Henry, his wife Gertrude and the young Edward, then aged around 11, were arrested and imprisoned in the Tower. Henry Courtenay was suspected of conspiring with the Pole to lead a Roman Catholic uprising referred to as the Exeter Conspiracy and was executed on Tower Hill on 9 January 1539 by beheading with a sword, Edward and his mother were attainted meaning he unable to inherit his father's titles and estates. 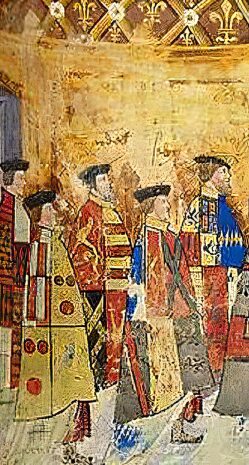 Gertrude Courtenay was released from the Tower in 1540, but Edward, as a great-grandson of King Edward IV, was thought to pose a threat to the Tudor dynasty and remained incarcerated. Henry VIII died in 1547, to be succeeded by his son, Edward VI. While still imprisoned Courtenay translated Benefizio di Cristo (The Benefit of Christ's Death) into English. In the hope perhaps of gaining favour from his cousin the king, he dedicated his translation to Anne Stanhope, wife of Edward VI's maternal uncle, the Lord Protector, Edward Seymour, Duke of Somerset. Edward VI was succeeded by his Catholic half-sister Mary I in 1553. Mary was a close friend of Edward's mother, Gertrude Courtenay, who secured the release of her son soon after. In all Edward Courtenay had endured fifteen years of incarceration in the Tower.

Queen Mary favoured her cousin Courtenay, by then a handsome young man of around 26, she showed him great affection and created him, Earl of Devon, a title which had belonged to his father and grandfather, on 3 September 1553 and a Knight of, the Bath on 29 September. He was considered by some as a likely suitor for the Queen's hand in marriage. Mary, however, chose to marry her maternal cousin Philip II of Spain, the son of Emperor Charles V.

Courtenay turned his attentions to the Queen's younger half-sister, Elizabeth, the heir to the throne. Mary's marriage to the foreigner Philip of Spain proved highly unpopular, many saw Elizabeth and Devon as likely replacements for the couple. The Protestants rose in rebellion under Thomas Wyatt to prevent the Spanish marriage in January 1554 but the rebellion was crushed by the government by March. Devon was suspected of negotiating with Wyatt and of preparing similar risings in the West Country. Both he and Princess Elizabeth were imprisoned in the Tower of London. On April 11, 1554, the scheduled date of his execution, Thomas Wyatt requested permission of the lieutenant of the Tower, to speak to Edward Courtenay. During their meeting, which lasted around half an hour-long meeting, Wyatt knelt before Courtenay and begged him "to confess the truth of himself," as Wyatt believed Courtenay was the original instigator of the rebellion. However, when at the Tower, Wyatt confessed his blame and was determined to exculpate Princess Elizabeth and Courtenay. Wyatt was executed for treason on 11 April 1554.

Courtenay was moved to the Castle of Fotheringhay in Northamptonshire, in May. The Spanish Ambassador, Simon Renard advised the Queen that both Elizabeth and Devon posed a threat to both her and Philip. Mary was informed that he could not recommend the arrival of Prince Philip in England until Devon and Elizabeth were executed or rendered harmless.

Although rumours abounded implicating Devon and Elizabeth with involvement in the Wyatt Rebellion, no solid evidence could be unearthed against them. Mary and Philip were married on 25 July 1554. Elizabeth was placed under house arrest in the care of Sir Henry Bedingfield but was released and permitted to return to court by the end of the year. At Easter, 1555, Devon was also released but was exiled to Europe, He retained his title of Earl of Devon but was forbidden to set foot in England. In November of that year, he wrote from Brussels, pleading permission to return to England to pay his respects to Mary and his mother which request was denied. Elizabeth refused to have anything more to do with him, she considered him partly responsible for her imprisonment and was said to despise him.

Edward Courtenay lived in exile in Venice, where he became the focus of the several English Protestant exiles, who had opposed Mary I's policies. Many of them had supported Wyatt's plot and Northumberland's plot to crown Lady Jane Grey. They hoped that they could bring about the marriage of Courtenay and the Protestant, Elizabeth, the heir to the throne.

Courtenay died suddenly at Padua, in 1556, the exact circumstances of his death are unknown. Peter Vannes, representative of Queen Mary I to the Republic of Venice wrote her an account, whereby he states "for his Honest recreation... to see his hawks fly upon a wasted ground, without any houses" was caught "in a great tempest of wind and rain" Disdaining to leave, he further refuses to change his wet clothing upon returning home and, within several days he "entered into a continue hot ague, sometimes more vehement than at another... so that his tongue had so stopped his mouth, and his teeth so clove together" He was buried in St Anthony's Church in Padua (the Duomo), where a monument to him with verse was erected. There were unconfirmed suspicions that he may have been poisoned or died of syphilis.