Princess Mary Henrietta, the eldest daughter of the ill fated Kiing Charles I and Henrietta Maria of France was born was born on 4 November 1631 at St. James's Palace, in London. 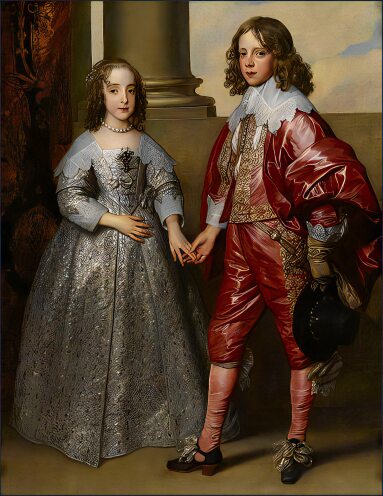 Her father the king wanted Mary to marry a son of King Philip IV of Spain, while her first cousin, Charles I Louis, Elector Palatine, was also a suitor for her hand in marriage. Both proposals fell through and she was betrothed to the Protestant Willem, the son and heir of Frederick Henry, Prince of Orange and Stadtholder of the United Provinces, and of Amalia of Solms-Braunfels. Charles I agreed to the marriage on the condition that the Dutch Republic entered into a political alliance with England. However, the alliance never materialised and Charles finally allowed the marriage to go ahead without it.

The marriage was celebrated on 2 May 1641 at the Chapel Royal, Whitehall Palace, when the bride was just nine years old and the groom fifteen. Although the couple were ceremoniously 'bedded' together in the Queen's state bedchamber at Whitehall and William kissed his bride and then lay beside her on the bed, their marriage was reputedly not consummated for several years due to the princess' youth. In 1642, Mary moved to the Dutch Republic with her mother, Queen Henrietta Maria. King Charles I rode along to the cliffs at Dover, waving his hat to bid farewell to his daughter, they were never to meet again.

As Charles I failed to reconcile his mounting differences with Parliament, Civil War broke out in England in 1642 when Charles raised the royalist standard at Nottingham in 1642. In January, 1649 the king was executed at Whitehall on the orders of Parliament, after being guilty at his trial. He wore two shirts against the cold so that he would not be seen to shiver, which his enemies might mistake for fear. The headsman took off his head with one blow and triumphantly held the gory and bloody symbol of royalist oppression aloft to the assembled crowds. England then became a republic. 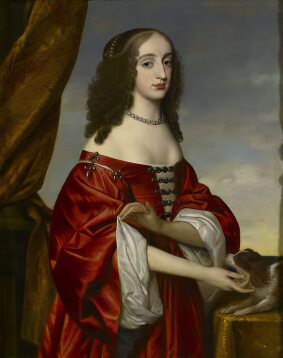 As the daughter-in-law of the stadtholder, Frederick Henry, Princess Mary became more engaged in courtly and public events. In March 1647, Mary's husband, William II, succeeded his father as stadholder. However, in November 1650, just after his attempt to capture Amsterdam from his political opponents, he died of smallpox. The couple's only child, Willem (later William III), was born a few days later.

Mary, now the Dowager Princess of Orange and a widow at nineteen years old, was obliged to share the guardianship of her young son with her mother-in-law, Amalia of Solms-Braunfels, and uncle-in-law, Frederick William I, Elector of Brandenburg. They had more power over the young Prince's affairs than she, as evidenced by his being christened Willem, and not Charles as she had wished. Amalia disliked Mary's relationship with her rival Elizabeth Stuart, Queen of Bohemia, who was Mary's aunt. The princess was also unpopular with the Dutch because of her sympathies with and the support she provided to her own family, the Stuarts.

Mary lived in the palace of the Stadthouder at the Binnenhof in the Hague, the building complex that now houses the Senate of the Netherlands. Her boudoir is still intact. At length, public opinion having been further angered by the hospitality that she showed to her brothers, the exiled Charles II and the Duke of York (later James II), she was forbidden to receive her relatives.

Her reputation was damaged by rumours that she was having an affair with Henry Jermyn, 1st Baron Dover, a member of her brother James' household. The rumours were probably untrue, but Charles II took them seriously, and tried to prevent any further contact between Jermyn and Mary. From 1654 to 1657, the princess was usually not in Holland. In 1657, she became regent on behalf of her son for the principality of Orange, but the difficulties of her position led her to implore the assistance of her first cousin Louis XIV of France.

The restoration of Charles II in England and Scotland greatly enhanced the position of the Princess of Orange and her son in Holland. In September 1660, she returned to England. She contracted smallpox, which had killed her husband some ten years before and had recently killed her youngest brother Henry, Duke of Gloucester. Mary became seriously ill, the prescribed treatment at the time, bleeding only served to make her condition worse. On Christmas eve 1660 Mary dictated her will. She named her brother Charles as her son's guardian, which was not accepted by the Dutch. Princess Mary died on 24 December 1660, at the age of 29, at Whitehall Palace, London and was buried in Westminster Abbey.