The illegitimate Children of Charles II

Although his marriage to Catherine of Braganza was childless, Charles II had many illegitimate children by various mistresses:-

Charles eldest son, James Crofts was born on 9 April 1649 in Rotterdam in the Netherlands, where his 18 year old father was living in exile following the execution of Charles I. His mother was Charles' mistress Lucy Walter, otherwise known as Mrs. Barlow. 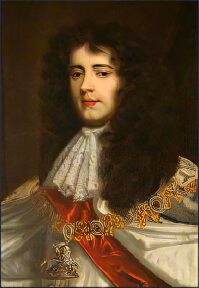 At the age of 14, he was created Duke of Monmouth with the subsidiary titles of Earl of Doncaster and Baron Scott of Tynedale. He was married to the wealthy heiress Anne Scott, 4th Countess of Buccleuch on 20 April 1663 and took his wife's surname.

Monmouth barely escaped trial for his involvement several plots, including the Ryehouse Plot, a conspiracy in 1683 which aimed at the assassination of Charles II and the Duke of York on their way to Newmarket in order to secure the succession of Monmouth to the throne, when the plot was discovered Monmouth swore he did not agree to it, but Charles, with good cause, no longer trusted his son. Spared by the king during trials of his colleagues, Monmouth moved to the Continent.

After King Charles II's death and within five months of the accession of James II, in February 1685, Monmouth returned to England to gather an army, landing with three ships at Lyme Regis in Dorset in early June 1685. He was captured after the Battle of Sedgemoor and beheaded on Tower Hill on the orders of James II on 15 July 1685. 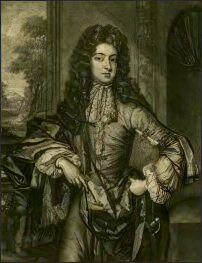 Charles FitzCharles was born around 1657 to Charles' mistress Catherine Pegge, the daughter of Thomas Pegge of Yeldersley in Derbyshire. Charles had the affair with Catherine whilst he was in exile, before becoming king. He was educated abroad, possibly in Spain and was known by the nickname of "Don Carlos".

Charles married Lady Bridget Osborne, daughter of Thomas Osborne, 1st Duke of Leeds, Lord High Treasurer. Charles FitzCharles died of dysentery at Tangier on 17 October 1680, at the age of 23, his body was returned to England and he was buried on 18 January 1681 in Westminster Abbey.

Born in 1658 to Catherine Pegge,Catherine died in infancy. 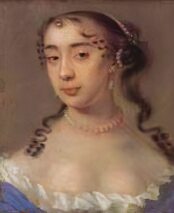 Born in 1650 the daughter of Elizabeth Killigrew, who had been a maid of honour to Charles II's mother, Queen Henrietta Maria, Elizabeth was the wife of Francis Boyle.

Charlotte was married firstly to James Howard, with whom she had a daughter, Stuarta Werburge Howard, who served as a lady-in-waiting to Queen Mary II.

In 1672 Charlotte married for a second time to William Paston, a member of the Paston family and later the second Earl of Yarmouth, by whom she had a further four children, Charles, Charlotte, Rebecca and William Paston.

Charlotte, Lady Yarmouth died on 28 July 1684 in London. She was buried at Westminster Abbey on 4 August 1684. 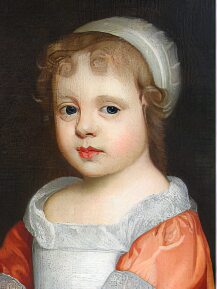 Anne Fitroy was the eldest daughter of the notorious Barbara Villiers, Duchess of Cleveland and mistress of Charles II and wife of Roger Palmer, 1st Earl of Castlemaine. At Anne's birth, both Roger Palmer and the king acknowledged Anne as their daughter and she was known by the alias Fitzroy, but she is generally believed to be the daughter of the 2nd Earl of Chesterfield, whom she was said to strongly resemble.

At the age of thirteen, Anne was married at Hampton Court to Thomas Lennard, 15th Baron Dacre on 11 August 1674 who was subsequently created Earl of Sussex. Anne indulged in a lesbian relationship with Hortense Mancini, a mistress of her father, which resulted in her husband having her removed to the country. In the summer of 1678, at the age of seventeen, Anne, Lady Sussex was abducted from a convent in Paris and seduced by Ralph Montagu He was successively became the lover of both Anne and her mother. 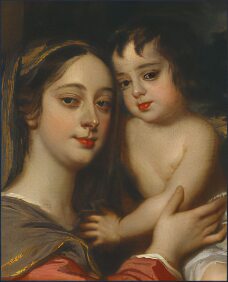 The eldest son of Charles II and Barbara Villiers, Duchess of Cleveland, Charles Fitzroy was born on 18 June 1662. His birth marked the separation of Barbara Villiers and her husband, Roger Palmer, Lord Castlemaine. Palmer a Roman Catholic, had Charles baptised into the Roman Catholic faith, but six days later the King had him re-christened into the Church of England.

He was styled Baron Limerick from birth. In 1670, at the age of eight, Charles was betrothed to Mary Wood, daughter of Sir Henry Wood, Clerk of the Green Cloth, but with the proviso that the marriage be delayed until Mary turned 16. Following the death of her father, the Duchess of Cleveland more-or-less abducted Mary, with the intention of bringing her up with her own children.

Charles had no children by his first marriage but had from his second marriage to Anne Pulteney, including William FitzRoy, who succeeded him as 3rd Duke of Cleveland. 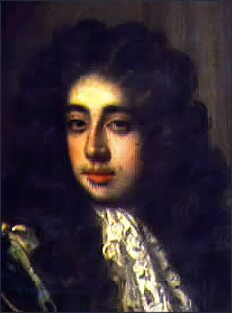 The second son of Charles II and Barbara Villiers, Henry was born on 28 September 1663.

On 1 August 1672 he was married at the age of nine to the five year old Isabella, the daughter and heiress of Henry Bennet, 1st Earl of Arlington. At the time of his marriage, Henry was created Baron Sudbury, Viscount Ipswich, and Earl of Euston and in 1675 he was further created Duke of Grafton.

Henry Fitroy and Isabella Bennet became the parents of Charles FitzRoy, 2nd Duke of Grafton, an ancestor of Diana, Princess of Wales Their great-grandson the 3rd Duke of Grafton became prime minister under King George III.

Grafton was Lord High Constable at the coronation of his uncle, King James II. During the rebellion of his half brother, James Duke of Monmouth he commanded the royal troops in Somerset; but he later he acted with John Churchill, and joined William of Orange to overthrow the King in the Glorious Revolution of 1688.

Henry died in 1690 at the age of twenty seven, of a wound he acquired at the storming of Cork while leading William III's forces in Ireland. 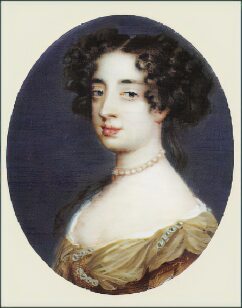 The daughter of Charles II and Barbara Villiers, Charlotte was born on 5 September 1664.

She was the favourite niece of James, Duke of York, Charles II's younger brother, who would later succeed to the throne as James II. Charlotte was said to rivaled her mother in beauty, "but was far unlike her in every other respect." Charlotte was sweet-tempered one memoirist recorded that Lady Lichfield was "a very good and virtuous lady. It is said that the king had a greater value and love for this lady than he had for his other children". 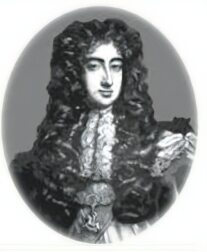 The third son of Charles II Barbara Villiers, George was born on 28 December 1665 at Merton College, Oxford and named for his mothers cousin George Villiers, Duke of Buckingham.

On 1 October 1674, he was created Earl of Northumberland, Baron of Pontefract and Viscount Falmouth In the summer of 1674 he served as a volunteer on the side of the French at the Siege of Luxembourg. On 6 April 1683, he was further created Duke of Northumberland.

In March 1686, Northumberland married Catherine Wheatley, the daughter of poulterer, Robert Wheatley of Bracknell in Berkshire. Catherine was the widow of Thomas Lucy of Charlecote Park, a captain in the Royal Horse Guards. Soon after the marriage, Northumberland and his brother, Henry FitzRoy, 1st Duke of Grafton attempted to privately convey her abroad to an English convent in Ghent, Belgium.

After the death of Catherine in 1714, George remarried to Mary Dutton, the sister of Captain Mark Dutton. 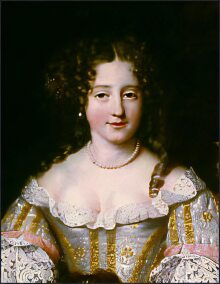 Barbara was born at Cleveland House in London on 16 July 1672, at around the time Barbara Villiers was losing her position as the king's chief mistress to Louise de Kérouaille.

Her mother insisted she was the king's daughter, Charles publicly acknowledged the child, while disputing being her father in private. Barbara was suspected to have been the child of either John Churchill, or Lord Chesterfield. Barbara Villier's long suffering husband, Roger Palmer, Earl of Castlemaine, left his estate to the younger Barbara.

In March 1691, the eighteen-year-old Barbara gave birth to an illegitimate son of James Hamilton, Earl of Arran, who was named Charles Hamilton. The child was raised by Barbara Villiers, who was said to have disowned her daughter.

Barbara became a nun in the English Priory of St. Nicholas, at Pontoise in Normandy, taking the name Sister Benedicta, where she eventually became prioress. She later became Prioress of the Convent of the Hotel Dieu at Pontoise, as Sister Benedicte, and died there on May 6, 1737. 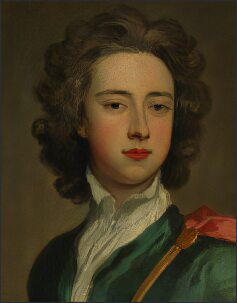 The eldest son of Charles II and his mistress the actress Nell Gwynne, Charles Beauclerk was born on 8 May 1670.

On 21 December 1676,he was created Baron of Heddington and Earl of Burford and on 5 January 1684, was given the title of Duke of St Albans. Following the death of his mother on 14 November 1687, Charles inherited a large estate, including Burford House, near Windsor Castle.

On 17 April 1694 he married Lady Diana de Vere, daughter and heiress of Aubrey de Vere, 20th and last Earl of Oxford, later who became lady of the bedchamber to Caroline of Ansbach, Princess of Wales. The couple had twelve children including Charles Beauclerk, 2nd Duke of St Albans (6 April 1696 - 27 July 1751)

The second son of Charles II and Nell Gwynne, James was born in 1671 and died young in 1680 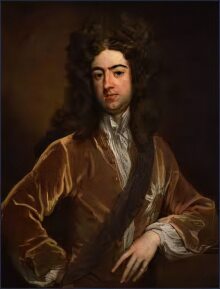 A patron of cricket, then becoming a major professional sport, Charles Lennox did much to develop the game in Sussex. 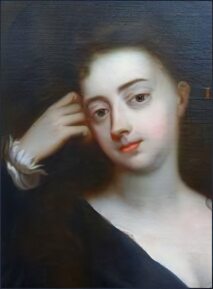 The daughter of Charles II by the actress Moll Davis,Mary Tudor was born on 16 October 1673.

Her second son Charles Radclyffe escaped and rejoined the James Francis Edward Stuart in France. He was re-captured in November, 1745 while sailing to join Charles Edward Stuart, the young Pretender, in Scotland and was beheaded on 8 December 1746, at the age of 53.

Mary died in Paris on 5 November 1726, soon after her fifty-third birthday.