Louise-Renée de Kérouaille, an ancestress of Princess Diana, was born in September 1649 into a noble but relatively poor Breton family, she the daughter of Guillaume de Penancoët, Seigneur de Kérouaille (d. 1690) and wife Marie de Ploeuc de Timeur (d. January 1709). She had a sister, Henriette Mauricette de Penancoët de Kérouaille, who married Philip Herbert, 7th Earl of Pembroke in 1674 and secondly in 1685 to Jean-Timoléon Gouffier, marquis de Thais.The name Kérouaille derived from an heiress whom Louise's ancestor François de Penhoët had married in 1330. 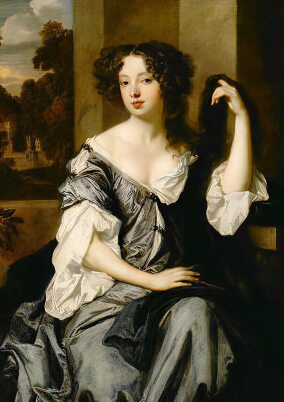 Louise was placed in the household of Henrietta Anne Stuart, Duchess of Orléans, nicknamed Minette and the favourite youngest sister of Charles II, she was also the sister-in-law of Louis XIV of France. The French poet Charles Robinet stated that Henrietta's "new maid-of-honour is as sweet as she is beautiful". In 1670 Louise accompanied Henrietta on a visit to Dover to negotiate a treaty with her brother Charles II, by the terms of the treaty, Charles was to convert to Catholicism when the time was ripe in return for a lucrative French pension.

The Duchess of Orleans died suddenly soon after this meeting and rumours abounded that Minette had been poisoned by her foppish and homo-sexual husband, Phillipe Duke of Orleans, the brother of Louis XIV, or his lover, the Chevalier de Lorraine. Louise was left unprovided for, but Charles II wrote to the French king requesting that Louise should come to England to serve as a maid of honour to his wife Catherine of Braganza. 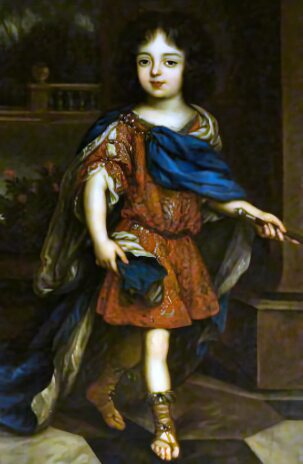 Louise was both intelligent and strong-willed, she was also very pretty, with dark hair and eyes and a child-like beauty, John Evelyn, the diarist, referred to her as "baby face".

It was claimed that she had been planted by the French court to lure the king of England. The support she received from France was certainly provided with the understanding that she should serve the interests of her native country. This deal was confirmed by gifts and honours from Louis XIV. However, she became highly unpopular with the English people. Louise yielded to Charles' advances only after she had established a stronghold in his affections. Louis once presented her with a gift of a pair of earrings costing eighteen thousand pounds, an amazing sum for the time.

Her only child, a son Charles, was born in 1672 and was created Duke of Richmond, Earl of Darnley and Lord of Torbolton, by his father the king in 1675. The title had been held by Charles' Tudor ancestors, both Henry VII and his father, Edmund Tudor had previously held it, as had Henry VIII's illegitimate son, Henry FitzRoy. He was given the surname Lennox, after Charles' Stuart ancestors, the Dukes of Lennox, (via Henry Stuart Lord Darnley).

Louise herself was granted the titles of Baroness Petersfield, Countess of Fareham and Duchess of Portsmouth in 19 August 1673. In December 1673 she was appointed Duchess of Aubigny in the Peerage of France at the request of Charles II. Charles' nicknamed her was 'Fubbs', meaning plump or chubby and in 1682 a new royal yacht, HMY Fubbs, was named after her. Nell Gwynne, Charles' Cockney mistress, referred to her less affectionately, as "Squintabella". Louise and Nell would prove rivals for many years. Complete opposites, Louise was a very proud woman of her noble Breton birth, Nell a true child of the London streets, scathingly nicknamed her the "Weeping Willow" for her tendency to weep.

Louise was strong enough to maintain her position during a long illness in 1677 retained her hold on Charles right to the end. In February 1685 she assisted in ensuring the king did not die without a Catholic confession and absolution. That Charles was truly attached to her is shown by his dying instruction to his brother to "do well by Portsmouth".

Soon after the king's death, Louise returned to France with her son the Duke of Richmond, where, except for one short visit to England during the reign of Charles' brother James II, she remained. Her son married Anne Brudenell (d. 9 December 1722), daughter of Francis, Baron Brudenell on 8 January 1692. The couple presented Louise with three grandchildren, Lady Louisa Lennox (24 December 1694 - 15 January 1716); who married James Berkeley, 3rd Earl of Berkeley, Charles Lennox, Earl of March, later 2nd Duke of Richmond and 2nd Duke of Lennox and Lady Anne Lennox, later Countess of Albemarle. By his mistress Jacqueline de Mézières, he had an illegitimate child, Renée Lennox (1709-1774) who in turn became the mistress of her cousin, Nell Gynn's grandson, Charles Beauclerk, 2nd Duke of St Albans.

During her last years, Louise became more religious and resided at Aubigny, deeply in debt. The French king, Louis XIV, and after his death the regent Philippe II, Duke of Orléans, provided a pension, Louise died in Paris on 14 November 1734, at the age of 85.