The notorious Barbara Palmer, mistress of Charles II, was born Barbara Villiers, the daughter of William Villiers, Viscount Grandison, and his wife, Mary Bayning, heiress of the 1st Viscount Bayning, at Westminster, London, on 20 September 1643. She was named after her paternal grandmother Barbara Villiers 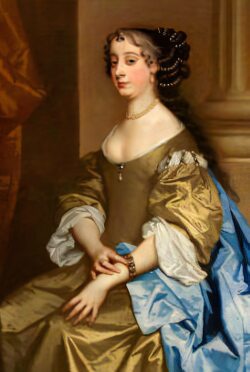 Her father, who was the cousin of the Duke of Buckingham, supported the Royalist cause during the Civil War and died from a wound acquired at the Battle of Newbury, leaving his widow and daughter in reduced circumstances.

Barbara's mother, barely out of her teens at the time of her father's death, remarried to Charles Villiers, 2nd Earl of Anglesey, her first husband's cousin and a Royalist supporter. After the execution of Charles I in 1649, the Villiers family transferred their loyalty to his son, Charles, then a penniless exile, but recognised by the Royalists as Charles II. Barbara spent her childhood in the country where she lived with relatives until she was brought to London at the age of fifteen. She indulged in a romance with Philip Stanhope, 2nd Earl of Chesterfield, but Barbara's lack of fortune left her with reduced marriage prospects and he married the wealthy Elizabeth Butler in 1660.

On 14 April 1659 Barbara married the Catholic Roger Palmer whose father predicted that she would make him one of the most miserable men in the world. In 1660, at the age of nineteen, Barbara first met the future Charles II at the Hague in Holland, when she had been entrusted by Royalists to bring letters and money to the King, the pair became lovers, Charles stated that 'she hath all the tricks of Ariten that are to be practised to give pleasure.' She accompanied Charles on his triumphant return to England and legend relates that the restored king spent his first night at his palace in Whitehall with her. As a reward for her services, the King created her husband Baron Limerick and Earl of Castlemaine in 1661.

Barbara Villiers was tall with auburn hair, slanting, heavy-lidded blue-violet eyes and a sensuous, sulky mouth, referred to by the diarist Samuel Pepys as 'lovely Lady Castlemaine' who wrote that in the Privy-garden he "saw the finest smocks and linnen petticoats of my Lady Castlemaine's, laced with rich lace at the bottom, that ever I saw; and did me good to look upon them". She was described by Bishop Burnet as 'a woman of great beauty, but more enormously vicious and ravenous, foolish but imperious.' 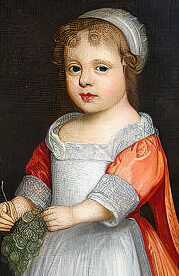 Her first child, Anne Palmer, later FitzRoy, was born on 25th February 1661, less than 9 months after the Restoration of the Monarchy. Her long suffering husband, Roger Palmer was convinced the child was his, Barbara however, insisted her daughter was the King's child, which Charles seems to have doubted as it took him 13 years to admit paternity. There was in fact three possible fathers, but Charles eventually accepted the child as his to placate the imperious Barbara and make the child's marriage to Lord Dacre easier. She and her husband went their seperate ways in 1662, following the birth of Barbara's first son, they never divorced probably because of Palmer's Roman Catholicism. He retained his affection for Barbara's daughter, Lady Anne, appointing her one of the trustees of his will, and made her his heir.

Barbara insisted on giving birth to her second child at Hampton Court Palace while Charles and his queen, Catherine of Braganza, were spending their honeymoon there. Roger Palmer had the child baptized a Catholic. When Barbara discovered this she had him baptized again the Church of England in the presence of the King, who proclaimed the child to be his.

In 1662, despite the heated opposition of Queen Catherine, she was forced to accept Barbara as Lady of the Bedchamber, which provided her with an income and rooms at the Palace. When Catherine sighted Barbara's name on the list of appointees, she furiously struck it off. Charles then brought Barbara to be presented to the Queen, who fainted, blood streaming from her nose. The King, incensed by what he saw as stubbornness, dismissed her Portuguese ladies. Charles' chief adviser, Edward Hyde, Earl of Clarendon, became a bitter enemy of Barbara's and spent considerable energy trying to get rid of her, she and the Queen feuded constantly. Clarendon was forced to plead the case of the woman that he abhorred to the Queen, who eventually accepted Barbara as one of her ladies. Barbara plotted with the future Cabal Ministry to bring about Clarendon's downfall, when he was dismissed in August 1667, she publicly mocked him, standing on the balcony in her nightclothes jeering at his misfortune, to which Clarendon reminded her that one day she too would grow old.

Her victory in being appointed Lady of the Bedchamber was followed by rumours of an estrangement between her and Charles, who was at the time infatuated with Frances Stuart, 'La Belle Stuart', whose face was used as Britannia on the coinage of Britain. Barbara's cousin, George, Duke of Buckingham, alienated by her arrogance, plotted with a faction at court, who, when the Queen suffered from a serious illness, hoped to replace her with Frances Stuart if she had died. In December 1663, Barbara announced her conversion to Roman Catholicism. The King quipped that he was interested in ladies' bodies, but not their souls. In 1670 Barbara was created Countess of Southampton and Duchess of Cleveland. She secured the right of succession to the remainder titles for her first and third sons, Charles and George, but the king at this time did not admit paternity of her second son, Henry. 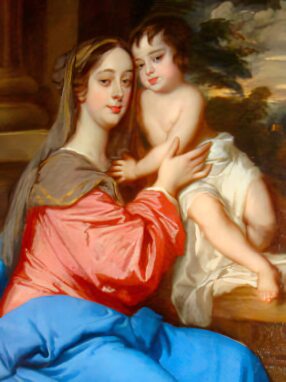 In all Barbara produced six children, five of which were acknowledged by Charles as his:-

Lady Anne FitzRoy (1661-1722), was probably the daughter of Charles II, although some reported she bore a resemblance to the Earl of Chesterfield. Anne was later to become Countess of Sussex.

Barbara FitzRoy (1672-1737) - Barbara claimed that her last child was Charles's daughter, but she was more likely to be the child of Barbara's then-lover, John Churchill, later Duke of Marlborough. She became a Benedictine nun. 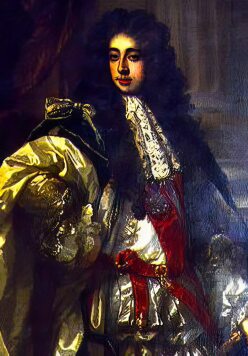 Barbara became pregnant with another child towards the end of 1667 or early 1668, which Henry Jermyn, not Charles was the father of, Barbara demanded that Charles acknowledge the paternity of her unborn child, which he refused. Barbara in a rage, exclaimed "God damn me! But you shall own it!" and threatened that, if he did not do so, she would dash its brains out in front of him. Charles still adamantly refused to do so, at which Barbara left the court to stay in Covent Garden with Lady Harvey. Charles, always the slave to his desires, eventually forgiveness and Barbara returned to court.

Barbara was famous for her temperamental character. The Diarist John Evelyn referred to her as "the curse of the nation", others described her as having a heart to match her famous temper. Rapacious and avaricious, she took blatant advantage of her influence over Charles II and used it to her benefit and she was famously extravagant and promiscuous. On the plus side, there are accounts of her kindness, once, after a scaffold had fallen onto a crowd at the theatre, she rushed to assist an injured child, and was the only court lady to have done so.

While Charles had taken other mistresses, the most famous being the actress Nell Gwynne, Barbara, possessed of a voracious sexual appetite, also took other lovers, including the acrobat Jacob Hall and her second cousin John Churchill. As the result of the 1673 Test Act, which essentially banned Catholics from holding office, Barbara lost her position as Lady of the Bedchamber, Her favoured status with the king began to wane after 1670 and Charles finally cast her aside completely, taking Louise de Kérouaille as his newest favourite royal mistress. The King, weary of heated rows, asked Barbara to live quietly and cause no scandal, in which case he "cared not whom she loved".

In 1676 she travelled to Paris with her four youngest children but returned to England four years later. She was later reconciled with Charles, who was seen enjoying an evening in her company a week before he died in February 1685. After his death, Barbara, aged forty-five, began an affair with Cardonell Goodman, an actor of infamous reputation, and in March 1686 she gave birth to his child. In 1700 Barbara moved into a house on Chiswick Mall, which is now known as Walpole House, after a later resident of the property, the eighteenth-century politician, Thomas Walpole.

Her long-estranged husband, Roger Palmer, died in 1705, and she married Major-General Robert "Beau" Fielding, an unscrupulous fortune-hunter whom she later had prosecuted for bigamy. She died at the age of 68 on 9 October 1709 at Chiswick Mall after suffering from oedema, known at the time as dropsy, an illness that caused her to swell to a huge size and ravaged her once-famous beauty. Barbara was buried in the churchyard at St. Nicholas, Chiswick.