Charlotte Stuart, styled Duchess of Albany, was the illegitimate daughter of the Jacobite Prince Charles Edward Stuart otherwise known as 'Bonnie Prince Charlie' and his Scottish mistress, Clementina Walkinshaw. Charlotte was born on 29 October 1753 at Liège and baptised into the Roman Catholic faith at the church of Sainte Marie-des-Fonts. 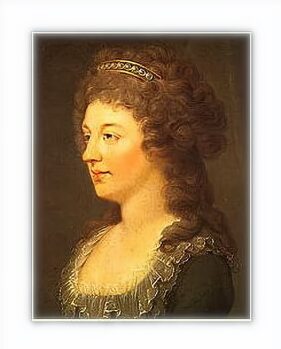 Her mother Clementina (1720-1802) was the daughter of John Walkinshaw of Barrowhill (1671-1731) and his wife Katherine Paterson. The Walkinshaws were Jacobite supporters who had fought for James Francis Edward Stuart in both the 1715 and 1745 rebellions. Clementina and Charles had known each other as children in Rome when his mother had acted as godmother to Clementina. Clementina met Charles again in 1746 when he was in Scotland after retreating from Derby during the 1745 Jacobite rising. She was staying at the home of her uncle Sir Hugh Paterson at Bannockburn, near Stirling. Charles came to Sir Hugh's home in early January 1746 where he first met Clementina and returned later that month. 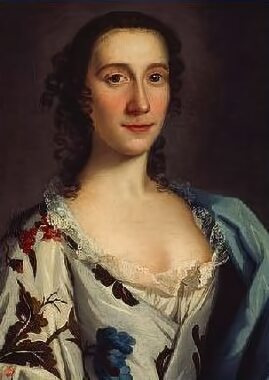 Following his defeat at the disastrous Battle of Culloden in April 1746, Charles fled to France. He indulged in an affair with his first cousin Louise de Montbazon and then with the Princess of Talmont. In 1752, he heard news that Clementina was at Dunkirk and in financial difficulties, he sent some money and asked her to join him at Ghent.

The relationship between Clementina and Charles was an unhappy and tempestuous one. Charles, disillusioned by the failure of his Scottish enterprise, was often drunk and violent towards her and was also highly possessive. By 1760, Clementina decided to end the relationship. She wrote to Charles' father, James Francis Edward Stuart, expressing a wish to enter a convent. James offered to pay for a Catholic education for Charlotte and agreed to pay Clementina an annuity of 10,000 livres. In July 1760, Clementina fled with the seven-year-old Charlotte, to the convent of the Nuns of the Visitation in Paris. Her escape was probably aided by James Stuart.

Charles was never to forgive Clementina for depriving him of his daughter and repeatedly refused to contribute to their support, although they continued to receive financial aid from his father. James died on 1 January 1766 but Charles still refused to make any provision for Clementina and Charlotte, an appeal was made by Clementina to his brother Henry Stuart, Cardinal York for assistance, he give them an allowance of 5,000 livres.

Charles returned to Rome on the death of his father in 1766, proclaiming himself King Charles III. In 1772, a marriage was arranged with the German Princess Louise of Stolberg-Gedern. She was a lively young woman of nineteen, Charles was then aged fifty-two, an ageing and bitter alcoholic. There were to be no children of the marriage and after experiencing violence toward her, Louise was later to leave him for her Italian lover, Alfieri.

Charlotte, now living in poverty, had been writing to her father for some time, she desperately entreated him to legitimise her, provide support, and bring her to Rome. In April 1772, Charlotte wrote a touching letter to "mon Augusta Papa". Charles, then living at the Palazzo Muti, the residence of the Stuarts-in-exile, finally relented but only on the condition that she would leave her mother behind in France. Charlotte refused to do so, leading to the furious Charles breaking off all further discussion on the matter. Towards the end of 1772, Clementina and Charlotte arrived unexpectedly in Rome but Charles haughtily refused even to see them.

Unknown to Charles, Charlotte became the mistress of Ferdinand Maximilien Mériadec de Rohan, Archbishop of Bordeaux and Cambrai. Ferdinand de Rohan was related to the houses of Stuart, Bourbon and Lorraine. The liaison produced three children, two daughters, Marie Victoire, Charlotte Maximilienne Amélie, and a son, Charles Edward. The existence of her children was kept secret. 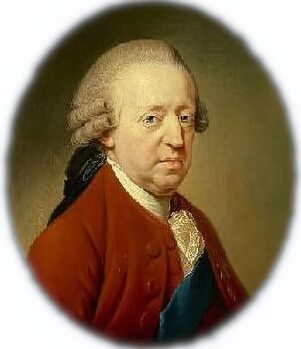 On the failure of his marriage to Louise Stolberg-Gedern, Charles, who had recently suffered a stroke and was seriously ill, finally took an an interest in Charlotte. She was then thirty, and had not seen her father since she was seven. On 23 March 1783, Charles altered his will to make Charlotte his heir and created her Duchess of Albany in the Scottish peerage, he also signed an act of legitimisation. The act was sent to Louis XVI of France. Henry Stuart contested the legitimisation but Louis XVI confirmed the act. In July 1784, Charles summoned Charlotte to Florence, where he was then living, she left her three secret children in the care of her mother.

By 1784, Charles was no longer the dashing young prince of the '45 Jacobite Rebellion, an ailing and bitter alcoholic, he was suffering from mental degeneration and had to use a litter to travel. Nevertheless, father and daughter became close, Charles introduced Charlotte into Florentine society and allowed her to wear his mother's Sobieski jewels. Charlotte herself was also in poor health, suffering from an ailment that would result in her death from "obstruction of the liver". Shortly after she arrived in Florence, she had her clothes altered because of a protruding growth. She kept in contact with her children in Paris through a constant stream of letters.

Aided by her uncle, Henry, Cardinal York, with whom she had developed a close relationship despite his initial hostility, Charlotte persuaded Charles to return to the Palazzo Muti in Rome in December 1785. She endeavoured to take care of him and limited his drinking. Just after his sixty-seventh birthday, Charles suffered a major stroke that left one side of his body paralysed, followed by a series of strokes. Charlotte remained with him until he died on 31 January 1788. 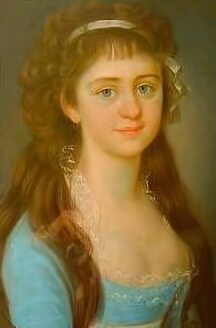 Charlotte Stuart never saw her children again, she died of cancer of the liver, at the age of 36, on 17 November 1789, at Bologna, just two years after her father. In her will, she left her mother a sum of 50,000 livres and an annuity of a further 15,000, and to Henry, she left the Garter Jewel worn by Charles I at his execution. The will made reference only to Clementina and to Charlotte's wish that Clementina might be provided for her 'necessitous relations'.

Charlotte was buried in the Church of San Biagio. Henry held a memorial service for Charlotte a few months later at Frascati and prayed at her graveside. Clementina lived on in Fribourg, Switzerland, until her death in 1802. The secret of the existence of her three illegitimate children by Prince Ferdinand de Rohan was only unearthed in the mid-twentieth century.

Charles Edward Augustus Maximilian Roehenstart was baptized into the Roman Catholic faith on 13 May 1784 at the parish church of Saint-Merry in the rue de Saint-Martin, Paris, when he was described as a son of Maximilian Roehenstart and of Clementine Ruthven, he was educated by his father's family in Germany and became an officer in the Russian army. On 8 August 1804, in Paris, he signed as a witness at the marriage of his sister Charlotte de Roehenstart to Jean-Louis de la Morliere. Charles was to travel widely, in 1812 he went to the USA and in 1816 to Scotland to visit his ancestral homeland, he later travelled to England, where he made an unsuccessful attempt to renew the Stuart claim on the dowry of Queen Mary Beatrice of Modena, his great-great-grandmother. In 1817 he evoked interest from the Hanoverian authorities and was briefly apprehended.

In later life, he spoke openly of his royal descent. Charles was killed in a coaching accident near Dunkeld at the age of 70, while returning from a visit to the Duke of Atholl at Blair Castle in Perthshire on 28 October 1854, a wheel came off the coach he had been travelling in which caused it to overturn. No portrait survives, but he was described by contemporaries as small in stature, with grey hair, blue eyes and of ruddy complexion. Charles was buried at Dunkeld Cathedral, where his grave can be seen. Although he married twice, he left no issue.

Marie Victoire Adelaide (born 1779) and Charlotte Maximilienne Amélie (born 1780) were thought to have been placed in the care of Thomas Coutts, the London banker, and a distant relative of the Walkinshaws. The elder of Charlotte's two daughters, Charlotte, who was born around 1778, married Jean-Louis de la Morliere.

Jules-Hercule, Prince de Guéméné and Duke of Montbazon, elder brother of Ferdinand de Rohan recognised Charlotte's children as his own. In 1793, at the outbreak of the French revolution, Marie Victoire de Rohan went to live with relatives in Poland. There, through the Stuarts' closest Polish cousins, the Princes Radziwill, she met and married Paul Anthony Louis Bertrand de Nikorowicz, a Polish nobleman and son of a banker and thereafter disappeared from the pages of history. In 2001, Peter Pininski, a Polish aristocrat, published his book The Stuart's Last Secret, in which he stated that his research had revealed that Marie Victoire de Roehenstart, demoiselle de Thorigny, married several times and left a son, Antime, from whom he is descended. Antime had a son, Charles, and a daughter, Julia-Thérèse, who married Count Leonard Pininski and became Peter Pininski's great-great-grandmother.