Prince Rupert of the Rhine

Prince Rupert of the Rhine was born in Prague in 1619, the third son of Frederick V, Elector Palatine, and Elizabeth Stuart, daughter of King James I and VI.

Rupert's parents had briefly been King and Queen of Bohemia, but his father's forces were routed by those of the Holy Roman Emperor at the Battle of White Mountain on 8 November 1620, thus starting the Thirty Years' War across much of Northern and Central Europe. The family were forced to flee, taking up residence at the Hague, as the guests of the Prince of Orange. Rupert spent most of his childhood at the Hague, where he earned the nickname "Rupert the Devil" due to being incredibly mischievous. Rupert grew to be a very tall man, measuring around 6 feet 4 inches by the time he reached his late teens. He became a soldier at the age of fourteen and fought in the Thirty Years War (1618 - 1648), which provided him with useful military experience when, in August 1642, he and his younger brother Prince Maurice arrived in England accompanied by English and Scottish veterans from the European wars to fight for his uncle King Charles I in the English Civil War. Prince Rupert of the Rhine 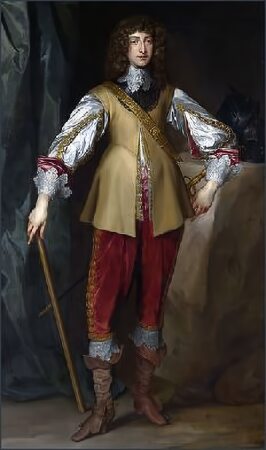 Rupert was to become the most successful and most charismatic of Charles I's generals. He was appointed to lead the royalist cavalry by his uncle and at the head of a courageous charge, he routed a Parliamentarian force at first the military skirmish of the war at Powick Bridge near Worcester, he later fought in the first major battle of the civil war at Edgehill in October 1642. Rupert's dramatic cavalry charge completely routed the parliamentarians but he pursued the fleeing troops too far from the battlefield, and thereby lost the chance to inflict a decisive defeat. After the battle, Charles thanked him for his 'great valour and loyal services' but deplored the excessive bloodshed, as 'all in both armies are our subjects'. He urged Rupert 'to mingle mercy with severity and look on our people as capable of reclaiming, though now misled'.

After Edgehill, Charles set up the Royalist headquarters in Oxford, Rupert suggested an immediate cavalry strike on London before the Earl of Essex's army could return, but the Charles was prevailed upon to adopt the plan of a slow and cautious advance on the city with the entire army. When the Royalists finally arrived at the capital, the city defences had been organised against them and thus the King had lost his chance of winning the war at a single stroke. Other military successes followed, giving Rupert a formidable reputation although his relationships with other Royalist commanders, who considered Rupert arrogant, were often belligerent. The fiery-tempered Rupert was impatient with what he interpreted as their lack of professionalism. His lack of tact when dealing with his fellow royalist commanders resulted in division within the Royalist camp. Edward Hyde, later Earl of Clarendon, stated that Rupert was 'a stranger to the government and manners of the kingdom, and utterly unacquainted with the nobility and public ministers, or with their rights' that his heart 'was so wholly set upon actions of war that he not only neglected but condemned the peaceable and civil arts' and that he 'was rough and passionate and loved debate'.

Rupert's most spectacular victory was the relief of Newark, even Clarendon admitted that the victory was 'as prodigious as any that happened throughout the war'. In 1644, Rupert led the relief of the siege of York but in July, was defeated by a parliamentary army at Marston Moor, where his dog followed him into battle and was killed. He lost York and the north of England to the Roundheads. In June 1645, he took part in the Battle of Naseby, against Fairfax's New Model Army, which resulted in a further Royalist defeat. Rupert created Duke of Cumberland and Earl of Holderness, was appointed Captain-General of the Royalist army in November 1644. This promotion served to heighten the hostility between Rupert and several of the king's counsellors, particularly Lord Digby. Realising that the war was lost, Rupert advised King Charles to seek a treaty with parliament, but the king remained of the opinion that he could still win.

When Rupert surrendered the city of Bristol to General Fairfax in the September of 1645, Charles angrily dismissed his nephew from his service. Rupert forced his way through the enemy lines and confronted the King at Newark in October 1645, where he demanded that he be heard before a court-martial. The verdict succeeded in clearing his name, but the event had led to estrangement between him from the King. Following the fall of Oxford in June 1646, Parliament banished Rupert and his brother Maurice from England.

Early in 1649, Rupert acquired command of the eight ships remaining in the Royalist squadron and sailed to southern Ireland to support the Marquis of Ormond. He ran supplies and reinforcements to the Royalist garrison on the Scilly Isles and attacked Commonwealth shipping in the Channel, selling the ships and cargoes he took, the proceeds of which he donated to the Royalist war effort. 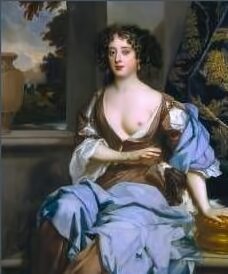 After the execution of Charles I, which Rupert received news of while in Ireland, he was welcomed at his cousin Charles II's court-in-exile in Paris. However, he quarrelled with Charles and his reception turned sour, the French court was dominated by Queen Henrietta Maria, who disliked her nephew and Rupert left Paris in June 1654 to return to Germany. Following the Restoration of Charles II in 1660, he returned to England, despite their earlier quarrel, he was warmly received by the new King, being granted an annual pension and appointed to the privy council. He became the first governor of the Hudson's Bay Company in 1670. Taking an eager interest in science, he dabbled in experiments and introduced the art of mezzotint printmaking into England, he became a founder member of the Royal Society.

Rupert had matured and managed to control his famous temper, he held naval commands in the Second Anglo-Dutch War of 1665-7. Although he was wounded at the battle of Lowestoft in 1665, he broke through the Dutch line at a critical point in the battle. In June 1666, he co-operated with George Monck, Duke of Albemarle, to introduce new, aggressive naval tactics in the inconclusive Four Days Battle. Their tactics achieved a significant victory over the Dutch the following month in the St James's Day Battle. He was appointed admiral of the English fleet in 1673, but poor communications with the French commanders resulted in Dutch victories at the battles of Schooneveld and Texel in June and July, after which Rupert retired from active naval command. His mistress, Frances Bard, gave birth to his son Dudley Bard in 1666.

In his later years, Rupert fell in love with a celebrated Drury Lane actress named Peg Hughes and made her his mistress. Due to Rupert's patronage Peg became a member of the King's Company by 1669 and was painted four times by the court artist, Sir Peter Lely, Peg gave birth to their daughter, Ruperta in 1673. Rupert gave Peg a vast amount of jewellery during their relationship, several items where from the Palatinate royal collection, including Queen Elizabeth of Bohemia's earrings. Rupert's daughter Ruperta later married Emanuel Scrope Howe, future MP and English general, the marriage produced five children, Sophia, William, Emanuel, James and Henrietta.

Rupert died from pleurisy, at the age of sixty-three, at his house in Spring Gardens, Westminster, on 29 November 1682, and was buried at Westminster Abbey on 6 December. He left most of his estate to Ruperta and Peg Hughes.