The Battles of the Civil War

Standards were raised for the first encounter of the Civil War in 1642. King Charles I personally commanded the Royal army which clashed with the Parliamentary forces under Robert Devereux, third Earl of Essex, at Edgehill, near Birmingham. The Parliamentarians opened the battle with a volley of cannon fire. Prince Rupert of the Rhine, the nephew of King Charles I, led a cavalry charge, putting the Parliamentarians to flight. Rupert pursued in their wake, leaving the King completely open to attack. Essex seized the advantage, leading an assault on the remaining Royalists, who eventually fled. Prince Rupert returned to the field but as darkness was drawing in, the battle concluded as indecisive.

The Royalist commander, William Cavendish, Duke of Newcastle, attempted to enclose the Parliamentary forces in Bradford. He clashed with the Parliamentary army under Thomas Fairfax, whom he heavily outnumbered, at Adwalton Moor. Adopting a defensive position, Fairfax successfully withstood several Royalist charges. However some of the Parliamentary troops abandoned their positions in pursuit of the retreating Royalists, resulting in they themselves being forced into retreat.

The Parliamentary army under the command of Sir William Waller had forced the Royalists under Lord Hopton, to Devizes. Waller decided to rest his army prior to mounting a final assault, unaware that on reaching Salisbury the Royalists had turned North to obtain aid. Lord Henry Wilmot brought a force to their assistance. On their approach, the Parliamentary army occupied a position on Roundaway Down, just north of Devizes. As a result of repeated Royalists charges the Parliamentary cavalry fled the field, although the infantry courageously continued to stand their ground. A force commanded by Hopton attacked them from the rear, causing them to eventually flee also.

Essex, in the course of travelling from London, was attacked by a company of soldiers under Prince Rupert. The Prince's strategy was to delay the Parliamentarians, allowing his uncle, Charles I to arrive at Newbury before Essex. Charles army blocked Essex's path and the battle was prepared for. The Royalists mounted an unsuccessful attack on the strong Parliamentary artillery position on Round Hill but were forced into retreat. A second Royalist attack on the hill met with success, pushing the enemy back. The Royalist cavalry had suffered heavy losses and the battle turned out again to be inconclusive.

Prince Rupert was commissioned to go to the aid of a Royalist army at York, when Oliver Cromwell, an East Anglian landowner from the ranks of the gentry, who had risen to lead Parliament, dispatched Parliamentary forces to confront him. Rupert ordered the cavalry to Marston Moor while riding with the remainder of the Royalist army via a second route. Heavily outnumbered, the Prince still decided to give battle. A surprise attack on Rupert's position was mounted, resulting in a Parliamentary victory. Following the battle, the Prince of Wales was sent to Bristol for his greater safety, where he was placed in charge of the West Country.

Prince Rupert of the Rhine 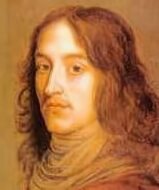 The King and his army were situated in a strong position in defence of the northern border of the town of Newbury. The Parliamentary army occupied a ridge to the north-east. The Parliamentarians were led by Edward Montagu, a force under the command of Sir William Waller was sent to skirt the edge of the King's army. At break of day, both divisions lead a simultaneous attack on the Royalists. The ensuing melee lasted for the rest of the day and at nightfall Charles decided to retreat to the royalist capital of Oxford.

The Battle of Naseby proved to be the turning point in the Civil War. In an attempt to bring the King to battle, the Parliamentary army under General Fairfax laid siege to Oxford. Charles, as expected, came to the defence of the city. As the Royal army approached, it was attacked by Fairfax and forced to engage in pitched battle. The Royalists foolishly abandoned a strong position and advanced on Fairfax. The Royalist cavalry, led by Prince Rupert, attacked, pushing back the Parliamentary cavalry. The New Model Army, a highly trained and well-armed Parliamentary force, took to the field, and Charles' army was overwhelmed. The battle went on for only three hours, when it became apparent that his cause was lost, the King fled the field. The royalists were chased for around twelve miles from Naseby and many of the captured were slaughtered. The battle effectively ended Royalist hopes of victory in the Civil War.

While stationed at Raglan Castle in South Wales the king received the news that Chester was the subject of a Parliamentary siege. He entered the city on 23rd September, while a force under Sir Marmaduke Langdale occupied Rowton Heath, about two miles to the south-east of Chester, with the intention of attacking the Parliamentary army from the rear.

The King Charles Tower, Chester city walls, from which Charles watched the battle of Rowton Heath 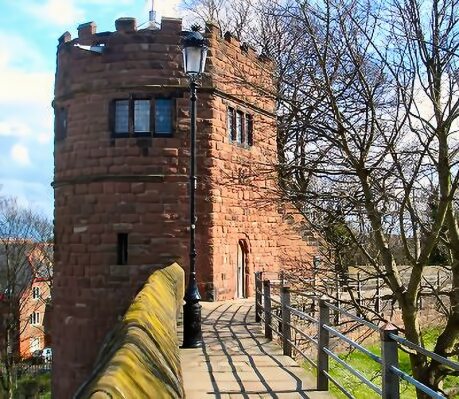 The Parliamentarians, led by Sydenham Poyntz, were informed that Charles had entered the city, and marched through the night to meet the Royalist forces. Charles watched the ensuing battle from a tower on the city walls, now known as the King Charles Tower. Battle was opened with a Parliamentary charge, which the Royalists drove back, but they were pushed back to the eastern suburbs of the city and finally driven from the field. The king was moved to the cathedral tower, where he was narrowly missed by a bullet fired by a Parliamentary sniper.