Geoffrey Plantagenet, known as 'the Handsome' was Count of Anjou, Touraine, and Maine from 1129 and Duke of Normandy by conquest from 1144. Geoffrey's son by his wife Matilda, (the daughter and heiress of Henry I of England) was to become the first king of the Plantagenet line. 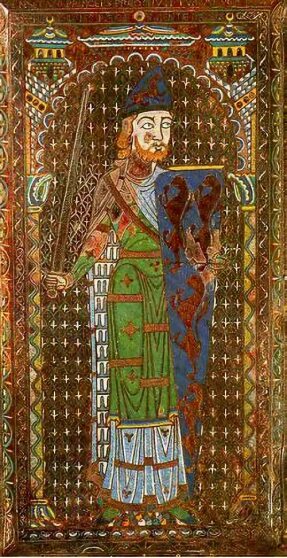 Geoffrey was born on 24th August 1113, the eldest son of Fulk V of Anjou (circa 1090- 1143) and Eremburga de La Flèche ((died 1126), Countess of Maine and the Lady of Château-du-Loir she was the daughter of Elias I of Maine. He was named after his great-grandfather Geoffrey II, Count of Gâtinais.

Geoffrey's nickname derived from a sprig of bloom, or Planta Genista, that he liked to sport in his helmet, an avid hunter he ordered acres of the broom (genet in French) to be planted to improve the chase. Thus was coined the surname of one of England's greatest dynasties, which ruled the country for the rest of the medieval era, although Plantagenet was not adopted as a surname until the mid-fifteenth century. 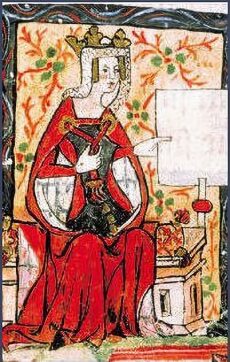 At the age of fifteen he was married to Matilda, the daughter of Henry I and and widow of Henry V, Holy Roman Emperor. The pair never cared for each other, their's was a union of convenience. Henry I, chose Geoffrey to sire his grandchildren because his lands were strategically placed on the Norman frontiers and he required the support of Geoffrey's father Fulk, his erstwhile enemy. He accordingly forced his highly reluctant daughter to marry Geoffrey.

Their marriage took place on 22nd May 1128, at Le Mans in France. In 1128 Henry I knighted his son-in-law Geoffrey and granted him a badge of gold lions (or leopards ) on a blue background.

The couple disliked each other from the outset of their union and neither was of a nature to pretend otherwise and so the scene was set for an extremely stormy marriage. They were, however, finally prevailed upon by the formidable Henry I to do their duty and produce an heir to England. They had three sons, Henry, born 1133, who was to become King of England, Geoffrey, Count of Nantes (1 June 1134 - 26 July 1158.) and William, Viscount of Dieppe (1136-1164).

He also had illegitimate children, Hamelin de Warenne, later to become Earl of Surrey, whose mother has been sometimes sourced as Adelaide of Angers, Emme, who married Dafydd Ab Owain Gwynedd, Prince of North Wales; and Mary, who became a nun and Abbess of Shaftesbury. He was also reputed to have indulged in an affair with his future daughter in law, Eleanor of Aquitaine, while she was the wife of Louis VII of France.

The chronicler John of Marmoutier describes Geoffrey as handsome, red haired, jovial, and a great warrior; however, Ralph of Diceto stated his charms were shallow and concealed a cold and selfish character. The year after the marriage of Geoffrey and Matilda, Fulk of Anjou left to marry Melisende, heiress of Baldwin II of Jerusalem, leaving Geoffrey to succeed as the count of Anjou. 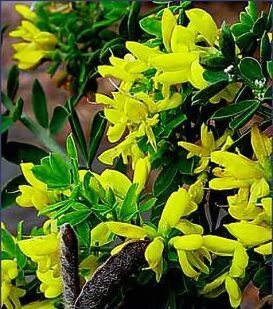 On the death of King Henry I in 1135, the English throne was usurped by Matilda's cousin, Stephen of Blois, which led to a prolonged and bitter struggle for possession of England and Normandy, known as 'the Anarchy'. Matilda was in France at the time of her father's death and in her absence Stephen promptly seized the throne for himself. The barons, disliking the idea of having a woman ruling over them, accepted the status quo and Stephen was duly crowned King of England.

In 1139 Matilda invaded England to claim her inheritance, she was besieged at Arundel Castle by King Stephen. Stephen himself was captured at Lincoln in February 1141, and imprisoned at Bristol. A legatine council of the English church held at Winchester in April 1141 declared Stephen deposed and proclaimed Matilda "Lady of the English". Stephen, however, was subsequently released from prison and had himself recrowned.

Geoffrey invaded Normandy on behalf of his wife, The Norman barons initially opposed him, not through loyalty to King Stephen, who had only visited Normandy on but one occasion, but from hatred of their traditional enemy, Anjou. Norman morale was however weakened when Matilda captured Stephen in 1141, leading many Norman castles to surrender to Geoffrey, which left him in control of most of the lands between Bayeux and the Seine. In 1142 he took the Avranchin and Mortain, and in 1143 moved east of the Seine, overrunning the Cotentin. He was formally invested as Duke of Normandy in 1144 following the fall of the Norman capital Rouen. Arques, the last castle opposing him, capitulated in 1145. Geoffrey held Normandy until 1149, when he and Matilda ceded it to their son, the future King Henry II.

Geoffrey also put down three rebellions in Anjou, in 1129, 1135, and 1145-1151. He was not on good terms with his younger brother, Elias, whom he had imprisoned. The threat of rebellion slowed his conquest of Normandy and is one reason he could not intervene in England to aid his wife. In 1153, a compromise in the struggle was reached in the Treaty of Wallingford. By its terms, Stephen was to retain the crown for the remainder of his lifetime, whereupon it would revert to Henry Plantagenet and his heirs. Stephen's son, Eustace, was disinherited and died shortly after.

Geoffrey of Anjou died suddenly on 7th September 1151 at the Chateau Eure-et-Loire, France, aged 38 years. John of Marmoutier records that he was returning from a royal council when he was stricken with a fever. He was buried at St. Julien's Cathedral in Le Mans, France.