The Counts of Anjou

The paternal ancestors of Henry II and the House of Plantagenet

Born circa 850 at Rennes, Brittany, the son of Tortulf, Ingeler was the founder of the Angevin dynasty. He married Elendis of Ambrose and died in 899.

Fulk the Red was born circa 880, he succeeded to the province in 899 and enlarged the Angevin domains by conquering Touraine and drove out the Normans. Fulk I, married Rosalie de Loches. He died circa 941.

Born circa 938, Geoffrey allied Anjou with Nantes against Rennes. Geoffrey was one of the men responsible for bringing Hugh Capet to the throne of France. He was married to Adele of Meaux, the daughter of Robert of Vermandois and Adelais de Vergy. Geoffrey died at the siege of Marçon (near Château-du-Loir) in 987.

Born circa 966, Fulk was the son of Geoffrey Greymantle. He one of the most remarkable figures of his period and the most powerful member of the dynasty. A temperamental, passionate and unbalanced character, he notoriously had his first wife, Elisabeth of Vendome, burnt to death in her wedding dress to punish her for adultery. Fulk came into conflict with the Counts of Rennes, he conquered and slew Conan I of Rennes at the Battle of Conquereuil on 27 June 992. He then extended his power over the Counties of Maine and Touraine. He died at Metz, whilst on pilgrimage.

Born b.1006, the only son of Fulk the Black and Hildegard of Sundgauadded, Geoffrey added .to the Angevin dominions by conquering Maine and Touraine but died without a male heir. The Gesta Normannorum Ducum records of him 'a treacherous man in every respect, frequently inflicted assaults and intolerable pressure on his neighbours'

The son of Ermenegarde, daughter of Fulk III of Anjou, and Geoffrey, Count of Gâtinais, Geoffrey was born in 1060. He succeeded his uncle, Geoffrey II Martel and was the first of the House of Plantagenet. Disputes with the church resulted in his deposition and imprisonment, but he was freed on the orders of Pope Urban II.

Fulk IV, the younger son of Ermengarde of Anjou, fought against and imprisoned his elder brother Geoffrey III for possession of the Angevin domains.

Geoffrey IV was the co-ruler of Anjou, along with his father, Fulk IV. He was assassinated in 1106, possibly at the instigation of his father.

The son of Fulk IV of Anjou and Bertrade de Montfort, Fulk V reincorporated Maine into Anjou by marriage in 1109. Through his marriage to Melisende, the daughter of Baldwin II of Jerusalem, he was appointed King of Jerusalem in 1131. Fulk was killed in a hunting accident at Acre in 1143. 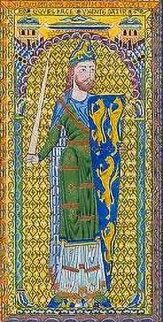 The son of Fulk of Jerusalem, Geoffrey Plantagenet Count of AnjouGeoffrey was nicknamed Plantagenet due to his habit of wearing a sprig of broom in his helmet. Contemporaries describe him as handsome and red-haired. At the age of fifteen, he embarked upon his stormy marriage to Matilda, the daughter and eventual heiress of Henry I of England, thereby obtaining a claim to England and Normandy. When the throne of England was seized by Matilda's cousin, Stephen, Geoffrey secured Normandy. He died of a fever in 1151 at Château-du-Loir.

The second son of Geoffrey the Fair and Matilda and the younger brother of Henry II. Geoffrey was born at Rouen, Normandy in 1134. He died at the age of 24 on 26th July 1158 at Nantes, Brittany.