Eochaid mac Run was the son of a daughter of Kenneth MacAlpin, whose name has gone unrecorded by history and Run Macarthuragail, King of Strathclyde. His paternal grandfather was Artgal, King of Strathclyde, who had died at the hand of Aodh, the brother of Constantine I. The evidence for Eochaid's rule as king of the Picts rests on the Chronicle of the Kings of Alba, which records:- 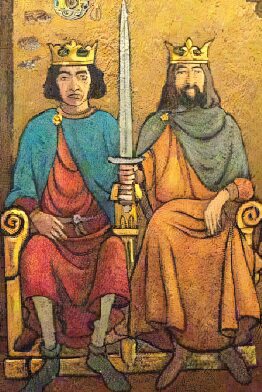 'And Eochodius son of Run king of the Britons, grandson of Kenneth by his daughter, reigned for 11 years; although others say that Ciricium (Giric) son of another reigned at this time, because he became Eochaid's foster-father and guardian. And in his second year Aed son of Niall [Aed Finliath] died. And in his ninth year, on the very day of St. Cirici (Cyrus), an eclipse of the sun occurred. Eochaid and his foster father was now expelled from the kingdom.

He ruled jointly with Giric or Grig, (Gaelic - Griogair mac Dhunghail) the murderer of his uncle and Scotland's previous King, Aodh 'Swiftfoot'. Giric was probably of Pictish descent. Very little is known about either of them. It is thought that Eochaid was a minor for whom Giric may have acted in a capacity as Protector or Regent.

Bernicia was overrun by the Picts and the monastery of Lindisfarne plundered. Giric annexed the Cumbrian district South of the Solway to the Kingdom of Strathclyde. He also liberated the Picts of Galloway from the dominance of the Angles.

Eochaid and Giric tried to strengthen their position by conciliating the Scottish Church, which they freed from the various exactions and services to which it had been until then liable. Which was correctly seen at the time as a bid for popularity.

And Eochaid, son of Run, the king of the Britons (of Strathclyde, and) grandson of Kenneth by his daughter reigned for eleven years; although others say that Giric, the son of another, reigned at this time because he became Eochaid's foster-father and guardian.

And in [Eochaid's] second year, Áed, Niall's son, died; and his ninth year, on the very day of Cyricus, an eclipse of the sun occurred. Eochaid with his foster-father was now expelled from the kingdom

They were succeeded by Eochaid's cousin Donald II. Click for Tanist Genealogy.