King Constantine II or Caustantin MacAodh (son of Aodh) succeeded to the throne on the death of his cousin Donald. He had been smuggled into exile as a child after his father, King Aodh had been murdered. Nicknamed An Midhaise, "the Middle Aged", he was to prove a remarkable man and a great survivor, he was undoubtedly one of the greatest of the early Gaelic Kings of Scotland.

The Dacre Stone commemorating the peace between the Saxon king Athelstan and Constantine, King of Scots 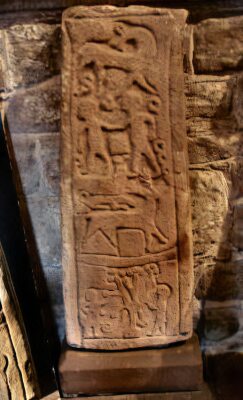 The desparate struggle with the Vikings continued, particularly the Uí Ímair, "the grandsons of Ímar", or Ivar the Boneless. In 902 the Vikings siezed Dunkeld, A sacred site to the Scots where the relics of the revered St. Columba were held. Constantine won a significant victory against the invaders at Strathcarron, in 904, driving them out.

The Anglo-Saxon Chronicle records that Constantine II, along with the Kings of Strathclyde and Northumbria, accepted the Saxon King Edward the Elder as the overlord and King of all of Britain. Constantine re-affirmed this alliance with Edward's son, Athelstan, meeting him at Penrith.

John of Worcester recorded that a son of Constantine was given as a hostage to Athelstan and Constantine accompanied the English king on his journey south. He was witness to a charter with Athelstan at Buckingham on 13 September 934 in which he is described as subregulus. The following year, Constantine was again present at Athelstan's court, where he appears as a witness at Cirencester, appearing as the first of several sub-kings, followed by Owen of Strathclyde and Hywel Dda. At Christmas of 935, Owen of Strathclyde was once more at Æthelstan's court along with the Welsh kings, but Constantine was absent. He later broke his allegiance to the English King by providing shelter for two of the rebellious sons of King Athelstan.

Relations between the two kingdoms became further strained when the Viking King Guthfrith died and disagreements arose as to who should succeed him. Ealdred, Lord of Bamburgh, also died and both Constantine of Alba and Athelstan of Wessex tried to influence the Bernicans to elect a candidate who would passively accept their overlordship. Constantine seems to have been successful. Accordingly, an English army landed in Scotland and raided the country, ruthlessly burning and pillaging all in their path.

Constantine consequently allied himself with the Britons of Strathclyde and the Danes. He married his daughter to the Viking King, Olaf the Red. He led an army into Cumbria, a battle was fought at Brunnanburh, where the Scots army met with utter defeat and his son was killed. Constantine was obliged to once more accept himself as Athelstan's vassal. The Anglo-Saxon Chronicle revelled in his defeat:-

"The hoary man of war had no cause to exult in the clash of blades; he was shorn of his kinsmen, deprived of friends, on the meeting place of peoples, cut off in strife, and left his son on the place of slaughter, mangled by wounds, young in battle. The grey-haired warrior, old crafty one, had no cause to boast"

The King remodelled the Church in Scotland along more Gaelic lines, bringing the practices of the Pictish church in line with those of the Scots. He and Cellach, Bishop of St. Andrews, called the Synod of Scone which met in 906.

In his later years, Constantine's health declined. At the age of about seventy, itself a remarkable achievement in such violent times, he exchanged a King's palace for a monk's cell when he abdicated in favour of his cousin Malcolm I and entered the monastery of St. Andrews as a monk, both the Life of Cathróe of Metz and the Prophecy of Berchán portray Constantine as a devout king.

Seven years later the Chronicle of the Kings of Alba records:- (Malcolm I) plundered the English as far as the River Tees, and he seized a multitude of people and many herds of cattle: and the Scots called this the raid of Albidosorum, that is, Nainndisi. But others say that Constantine made this raid, asking of the king, Malcolm, that the kingship should be given to him for a week so that he could visit the English. It was Malcolm who made the raid, but Constantine incited him, as I have said.

He eventually was to become the Abbot of St. Andrew's and died there in 952. He is believed to have been buried at Maidstone in Aberdeenshire. His son Indulf became King of Scotland after the death of Malcolm I.