Athelstan, who was the eldest son of King Edward the Elder and and Ecgwynn was born in 895 during the latter years of the reign of his grandfather, King Alfred the Great. Very little is known about Athelstan's mother. Some sources describe her as a "common law wife". There are reasons to suspect that she was of low social status for a prince's wife. The marriage or relationship of Edward and Ecgwynn appears to have come to end before Edward became king. King Athelstan 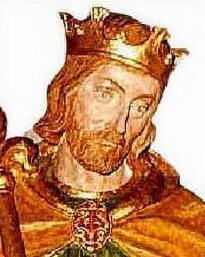 Athelstan is recorded as being a tall and handsome youth with light flaxen hair. As a youth he had been ennobled by his grandfather, of whom he was said to be a great favourite. To mark the occasion King Alfred endowed his grandson with a mantle of royal purple, a girdle set with precious stones and a Saxon seax (sword) in a golden scabbard. Described in the Gesta Regum Anglorum of William of Malmesbury (c.1080-1143) as 'of handsome appearance and graceful manners... [N]ot beyond what is pleasing in stature and slender in body; his hair, as we ourselves have seen from his relics, flaxen, with gold threads.'

As a child, Athelstan had been brought up in the care of his aunt, Aethelflaed, Lady of Mercia. He was thirty years old at the time of his father's death. According to the Anglo-Saxon Chronicle Edward the Elder was suceeded by his second son Ælfweard, (904-924) on 17th July 924, while Athelstan inherited the sub kingdom of Mercia. Ælfweard, was Edward the Elder's son by his marriage Elfflaed, he was probably never crowned, died on 2nd August, 924 at Oxford, possibly on the orders of Athelstan, who then suceeded to the throne of all England. William of Malmesbury describes Athelstan as being fair haired, slender and of middle height.

Athelstan was crowned with much splendour at Kingston-upon -Thames on 4 September, 925. Kingston was the traditional site of the coronation of the Saxon Kings, seven of which where crowned there. In accordance with an ancient custom, they took possession of their throne standing upon a large rock.

The Coronation Stone at Kingston-upon-Thames

The stone still exists, standing outside the Guildhall at Kingston-upon-Thames, with a silver penny from the reign of each Saxon king set into its plinth.

Conspiracies against the new king's rule formed in the early months of Athelstan's reign, lead by one Alfred, who was probably a member of the Saxon Royal House. The Kings brother, Edwin, was in 933 accused of being party to this conspiracy, despite his strong protestations to the contrary.

Athelstan strongly suspected his brother Edwin of complicity and became resolved to be rid of him. To spare the King the neccessity of having him executed, the unfortunate Edwin was sent to sea in a leaking old boat without a sail and with neither water or provisions. Dreading the prospect of drifting and starving to death, Edwin threw himself into the sea and drowned. Athelstan was said to later regret his conduct in the matter and did pennance for this action.

The complete supremacy of the House of Wessex was firmly established under Athelstan and he could correctly be described as the first true King of all England. Athelstan used the title Basilius, the Greek term for king.

Much of his reign was occupied, as were his forefather's, with the ongoing struggle with the Viking invaders. Athelstan concluded a treaty with them at Tamworth, by the terms of which he married his sister, Edith, to the Danish leader Sithric, King of York. Sithric died the following year and Athelstan siezed the opportunity to take Northumbria. His kingdom thereby became roughly equivelant in size to modern England.

The Celtic Princes of Wales paid homage to him at Bamburgh in the early part of his reign, along with Hywel, King of Cornwall, Constantine II, King of Scots and Owen of Gwent. Athelstan succeeded in expelling the Cornish from Exeter and established the border with Cornwall as the River Tamar.

In the year 937, Constantine II of Scotland in alliance with Eógan of Strathclyde and Olaf Guthfrithson, King of Dublin, invaded England. The King marched an army north to meet them, gaining a glorious victory at the Battle of Brunanburh in 937, against a combined invasion force of Vikings and Scots. The Annals of Ulster record the battle as:- ' a great battle, lamentable and terrible was cruelly fought...in which fell uncounted thousands of the Northmen. ... And on the other side, a multitude of Saxons fell; but Æthelstan, the king of the Saxons, obtained a great victory'

The Dacre Stone commemorating peace between Athelstan and Constantine, King of Scots 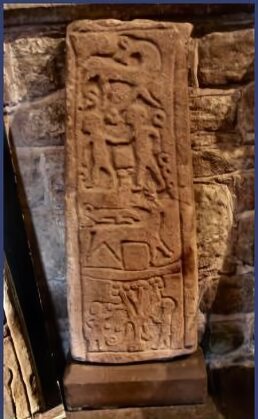 Brunanburh is thought to have been one of the bloodiest battle of the period. Five kings and seven earls lost their lives in the carnage. The kings cousins Alfric and Athelwin and a prominent Saxon bishop were also among the casualties. The events of the battle are unclear, but according to some sources the West Saxons mounted a cavalry charge on the enemy, directly contradicting the popular belief that the early English fought on foot. Cavalry in the Saxon force were most likely to be mercenaries, however, the Anglo-Saxon Chronicle itself makes no such mention of a cavalry charge and it is believed that the mention of the Saxons using cavalry has arisen through a mistranslation the Anglo-Saxon 'eorodcistum,' which means troop not cavalry. Constantine of Scotland fled the battlefield after his son was killed in the fighting. The Anglo-Saxon Chronicle records the King's resounding victory in the form of a jubilant poem in celebration of the event:-

'The hoary man of war had no cause to exult in the clash of blades; he was shorn of his kinsmen, deprived of friends, on the meeting place of peoples, cut off in strife, and left his son on the place of slaughter, mangled by wounds, young in battle. The grey-haired warrior, old crafty one, had no cause to boast'

Despite its fame, the site of the battle remains uncertain and theories have been debated linking it to several sites including Burnswark in southwest Scotland, Tinsley Wood near Sheffield, Yorkshire and Axminster in Devon, however Bromborough on the Wirral Peninsula remains the most likely candidate. This battle remains one of great importance in British history since Athelstan's utter and crushing defeat of the combined Norse-Celtic force ranged against him irrevocably confirmed England as an Anglo-Saxon kingdom, forcing the Celtic kingdoms to consolidate in the positions they have occupied to the present day.

Tomb of Athelstan at Malmesbury Abbey 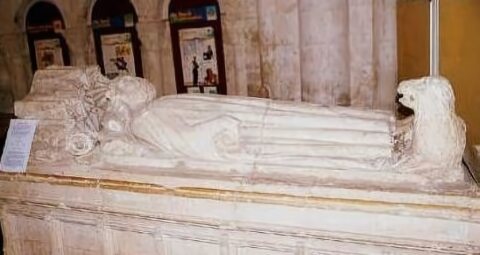 Political alliances were arranged through the marriages of the King's sisters, .He married one of his many sisters to Sithric Cáech (meaning the 'Squinty'), the Viking King of Yorvik (York) the marriage took place at Tamworth and resulted in Sithric acknowledging Athelstan as over-king and converting to Christianity. His sister Edith was married to the Holy Roman Emperor, Otto I and another sister, Edgifu became Queen of France through her marriage to Charles the Simple. He also married one of his sisters to the Viking Egil Skallagrimson, the subject of an Icelandic saga and a further sister's marriage forged a political alliance with Alan II of Brittany.

Athelstan was an able administrator and made many good laws, which combated theft, oppression and fraud and mitigated severity to young offenders. He was charitable and popular and like his great-grandfather Ethelwulf, made provisions for his poorer subjects. Athelstan directed that each of the manors owned by the crown should be subject to an annual charge, which should be used to relieve the poor and the destitute. The Annals of Ulster refer to him as 'a pillar of dignity in the western world'.

King Athelstan died on 27th October, 940, at Gloucester, aged forty-four, after a sixteen year reign and chose to be buried at Malmesbury Abbey in Wiltshire, a favourite of his. He was buried close to the shrine of Saint Aldhelm, where he had buried his cousins who died at Brunanburh, in preference to his family mausoleum at Winchester. Although his tomb still survives, his body was lost during the Reformation.

William of Malmesbury wrote of him two hundred years later ' The firm opinion is still current among the English that no one more just or learned administered the state.'

Bromborough, on the Wirral Perninsula, most likely candidate for the site of the Battle of Brunanburh

Edward the Elder PreviousNext Edmund I