The Battle of Brunanburh

The Battle of Brunanburh fought in 937 and one of the bloodiest battles ever fought on British soil, was a great Anglo-Saxon victory for a combined Anglo-Saxon army from Mercia and Wessex led by Athelstan, King of England, (the grandson of Alfred the Great) and his brother Edmund over the allied forces of Olaf III Guthfrithson, the Norse-Gael King of Dublin; Constantine II, King of Scots; and Owen I, King of Strathclyde, who invaded England via the Humber. 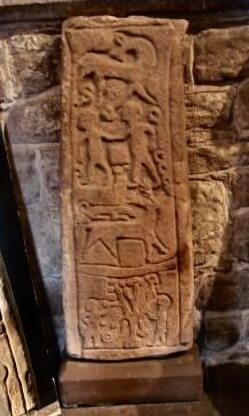 The battle was referred to as 'the greatest single battle in Anglo-Saxon history before the Battle of Hastings'. The site of the battle is not known with certainty, although Bromborough on the Wirral Peninsula, which name may be derived from Old English Brunanburh (meaning 'Brun's fort'), is the most likely candidate, the battle is believed to have been fought on what is now a golf course at Bebington. Although other locations in Scotland, Yorkshire, Northamptonshire and Lancashire have been suggested by historians and compelling arguments have been made for these other locations, the weight of academic opinion is heavily on Wirral.

Brunanburh was the old name for Bromborough, which was used until about 1732, the poem in the Anglo Saxon Chronicle gives the location of the coastal point of escape as Dingesmere, which has now been explained as the 'Things - mere', the wetland or marshland associated with the Thing - the Viking parliament, at Thingwall on Wirral.

While doubt will always remain as to the location of the battle, the evidence of history, folklore studies, and literature all suggest Bromborough may be the most likely contender. Egil's Saga, a story which tells of the battle, may have referred to Wirral as Wen Health, Vínheíþr in Icelandic.

Although details of the Battle of Brunanburh are scanty, we do know that the Celtic/Norse army dug themselves into the battlefield with timber-fortified trenches, although these defences were eventually overrun. The fighting is recorded to have gone on all day and during its course, five kings and seven earls lost their lives in the carnage. The king's cousins Alfric and Athelwin and a prominent Saxon bishop were also among the casualties.

According to some sources, the West Saxons mounted a cavalry charge on the enemy, directly contradicting the popular belief that the early English fought on foot. Cavalry in the Saxon force was most likely to be mercenaries, however, the Anglo-Saxon Chronicle itself makes no such mention of a cavalry charge and it is believed that the mention of the Saxons using cavalry has arisen through a mistranslation of the Anglo-Saxon 'eorodcistum,' which means troop, not cavalry.

Constantine, King of Scotland fled the battlefield after his son was killed in the fighting. The outcome of Brunanburh resulted in England, which had previously been a loose confederation of Anglo-Saxon kingdoms, was finally becoming a unified kingdom, the northern borders of England were secured and the Celts contained to the west.

on that battlefield - young kings

by swords put to sleep - and seven also

of Anlaf's earls, countless of the army,

of sailors and Scotsmen. There was put to flight

the Northmen's chief, driven by need

to the ship's prow with a little band.

He shoved the ship to sea. The king disappeared

on the dark flood. His own life he saved.

So there also the old one came in flight

to his home in the north; Constantine,

that hoary-haired warrior, had no cause to exult

at the meeting of swords: he was shorn of his kin,

deprived of his friends on the field,

bereft in the fray, and his son behind

on the place of slaughter, with wounds ground to pieces,

too young in battle.

The Annals of Ulster

A huge war, lamentable and horrible, was cruelly waged between the Saxons and Norsemen. Many thousands of Norsemen beyond number died although King Anlaf escaped with a few men. While a great number of the Saxons also fell on the other side, Æthelstan, king of the Saxons, was enriched by the great victor.

Then the dark raven with horned beak,

and the livid toad, the eagle and kite,

the hound and wolf in mottled hue,

were long refreshed by these delicacies.

In this land no greater war was ever waged,

nor did such a slaughter ever surpass that one.

The Battle of Culloden PreviousNext The Rout of Winchester