Malcolm I, or Maelcoluim, the son of Donald II, succeeded to the throne in accordance with the tanist system on the death of his cousin Constantine II. He was seen as 'a valiant prince' and a lawgiver and was nicknamed "An Bodhbhdercc, "the Dangerous Red".

Malcolm's reign commenced with an attempt to assert Scottish power over the area beyond the River Spey, where considerable parts of the country had long been subject to Viking rule.

The Monastery of Iona 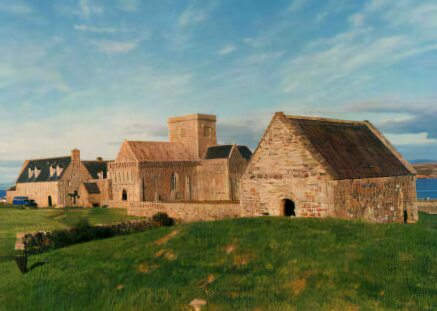 The kingdom of Northumbria in Northern England had for a long time been under the control of the Viking Princes of Dublin. They received support from the Cumbrians and the Picts of Galloway.

King Edmund the Elder of England laid Cumbria waste in 945 and blinded two sons of Domnall mac Eógain, king of Strathclyde. He granted Malcolm the lease of Strathclyde on his acknowledgement of Edmund as his overlord on the understanding that Malcolm would assist the English against the Vikings when required. In 946, King Edmund was succeeded by Edred as King of England.

Malcolm honoured his agreement with Edward the Elder and may have been renewed with the new king, Edmund's brother Edred. The Viking Eric Bloodaxe captured York in 948, but the city was retaken by Edred, and when Amlaíb Cuaran again took York in 949-950, Malcolm led a raid into Northumbria, reaching as far south as the Tees, where it was recorded that he took "a multitude of people and many herds of cattle". The Annals of Ulster record a battle in 952 between "the men of Alba and the Britons (of Strathclyde) and the English" against the foreigners, i.e. the Vikings. This battle is not mentioned in the Anglo-Saxon Chronicle, and it is unclear whether it should be related to the expulsion of Amlaíb Cuaran from York or the return of Eric Bloodaxe

According to the Pictish chronicle, King Malcolm I was killed in the year 954 in the course of putting down an insurrection by the men of Moray lead by Cellach, at Kincardine on the banks of the River Forth, in the Mearns (Grampian) and was interred in the traditional burial ground of the Gaelic Kings of Scotland, on Iona.

Malcolm was succeeded by his cousin King Indulf. His two sons Dub and Kenneth later ruled as Kings of Scotland.