Indulf, King of Scots, was the son of Constantine II, his mother may have been a daughter of Earl Eadulf I of Bernicia, who was an exile in Scotland. Known as Idulb Mac Caustantin, and nicknamed An Ionsaighthigh, "the Aggressor", he succeeded his second cousin Malcolm I in 954. He was crowned at Scone, on 'the Hill of Credulity' (Caislean Credi) or the Moot Hill, as it became known to later centuries. 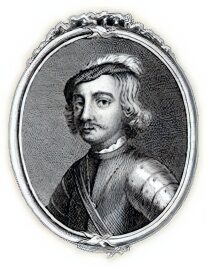 During the reign of Indulf, the kingdom of Scotland was extended south of the Forth. Indulf's main claim to fame was the regaining of the fortress of Edinburgh, or Dun Eden, from the Saxon King Edred, making him ruler of the land as far south as the Lothian River Esk, on the east side of the island.

The name Indulf is a gaelicisation of the Anglo-Saxon name Eadulf. The name of Indulf's wife has not been recorded, but he had three sons, Colin, Olaf and Eocha, who all were to die violently. The eldest of these Colin or Cuilean, was eventually to became King of Scotland.

The Vikings continued to attack Scotland during Indulf's reign. In search of plunder, they attempted to land at the Firth of Forth, the appearance of their ravaging hordes struck terror into the hearts of the people. Indulf met them in battle, defeating and driving them out of Scotland.

Following the example of his father, Constantine II, the King intended to abdicate and become a monk. He died in 962 Indulf's death is reported by the Chronicon Scotorum, the Chronicle of the Kings of Alba adding that he was killed fighting Vikings near Cullen, at the Battle of Bauds, at the Muir of Findochty, Banffshire... The Prophecy of Berchán, however, claims that he died "in the house of the same holy apostle, where his father [died]", that is at the céli dé monastery of St Andrews. It is unclear if he was still King at the time or had already abdicated. He was succeeded by King Dubh.

The Hill of Credulity

The Hill of Credulity had been a place of significance since Pictish times. It was probably a barrow or chambered cairn, associated with an ancient ancestor of the royal house. On it, all new Kings of Scotland were seated upon the Stone of Destiny. The practice of seating the ruler upon a stone was practised in Ireland since ancient times. This tradition is understood to be a surviving part of ancient fertility rites.