Colin King of Scots was known as Cuilean Finn (the White) and was one of the three sons of King Indulf, the other two being Amlaïb and Eochaid. After the murder of his cousin King Dubh, which he was widely suspected of involvement in, took possession of Scotland. Colin had two sons Constantine (who was later to become Constantine III) and Malcolm MacAlpin. 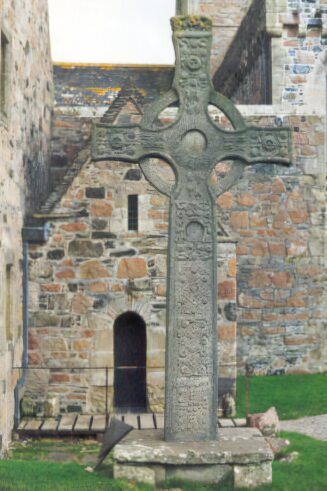 Contemporary chroniclers described Colin as 'useless in the govenment of the kingdom' and as being 'sore given to violating maids, a lustful adulterer with the wives of nobles and private persons.'

After a reign of only four years, he was killed in 971 along with his brother Eochaid, in a hall-burning at Lothian by Riderch, also known as Amdarch, sub-king of Strathclyde, who was probably the son of King Dyfnwal III of Strathclyde. The attack was in vengeance for the rape of Riderch's daughter by Colin and the murder of his brother during a campaign to control Strathclyde.

The Chronicle of the Kings of Scotland records that Riderch killed Colin "in Ybandonia, for the sake of his daughter". While Ybandonia has never been identified with certainty, additions to the Chronicle of Melrose locate Colin's death in Lothian, and reiterate the importance of the daughter, "because of the rape of his daughter, whom the king had carried for himself."

The Prophecy of Berchïn also confirms that Colin was killed by the Britons of Strathclyde, as does the Chronicle of the Kings of Alba, which adds that Colin's brother Eochaid was also killed

The chronicle of Melrose records that Riderch was said to have 'mutilated him in Lothian.' The murder was part of the ongoing conflict between the MacAlpin dynasty and the nobles of Strathclyde.

Colin was the fourth King of Scotland in a row to die violently. His brother, Eochaid was also killed in the same year. He was succeeded by his cousin, Kenneth II, the brother of King Dubh, Kenneth was driven from the throne for a short time in the late 970s by Colin's surviving brother Amlaïb. Colin's son Constantine III later became King of Scotland.