Constantine III, or Caustantin MacCuilen (son of Colin) also known as Constantine 'the Bald' usurped his cousin Kenneth's throne, but survived for only two years after.

Very little is known about him. Although he was married the name of his wife is not recorded and he left no children to succeed him. According to John of Fordun (writing in the fourteenth century), Kenneth II attempted to change the succession rules. Allowing "the nearest survivor in blood to the deceased king to succeed", thus securing the throne for his descendants.

The stanzas of The Prophecy of Berchán state of Constantine:-

"A king will take (the sovereignty), who will not be king; after him, Scotland will be nothing. It will be the weak following the strong; though true is what my lips relate. A king with reproach above his head; alas for Scotland during his short time! Feeble men will be about him, in the region of Scone, of melodious shields. A year and a half (a bright space), that will be his whole reign; from taking Gaels (hostages?) he will go to death; he falls, his people fall. He will fight great battles in Scotland; by the disgrace of his head he will destroy colours. He will be in communion of battle, from Stirling to Abertay'

Constantine II, the last of the line of Áodh to occuppy the throne, was destined to become another victim of the increasingly bitter and blooody struggle over the Scottish succession after a reign of only eighteen months. 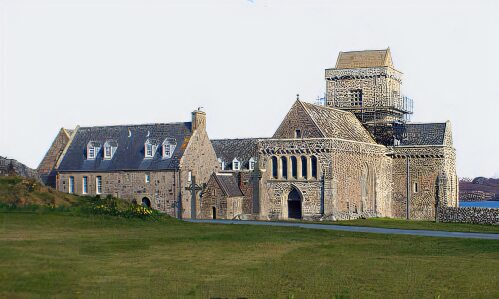 According to the Annals of Tigernach, he was killed at Rathinveramon, at the site of the Roman fort at Cramond, probably at the instigation of his third cousin and successor, Kenneth III, or by an illegitimate son of Malcolm I, also known as Kenneth. The Annals report that Constantine was slain in battle in 997:-

"A battle between the Scots, in which fell Constantine son of Culannan, king of Scotland, and many others."

An entry in the Chronicle of Melrose states

Reportedly at the mouth of Almond in Tegalere. The killer is again reported as Kenneth, the son of Malcolm. John of Fordun's narrative provides more details. According to him, Constantine and Kenneth, son of Malcolm met at Laudonia (Lothian), by the banks of the River Almond. A battle ensued which resulted in great slaughter on both sides and the death of both leaders. The guards of Constantine fled to Gryme (Kenneth III), "colleague" of their leader, allowing him to win the throne. However, news of the battle and its results reached Malcolm (II) in Cumbria. He learned of the death of his "uncle and the rest of his faithful friends", and returned to gather reinforcements for his cause. Though he was defeated in his initial conflict against Gryme.

Constantine was buried in the churchyard of Iona Abbey (pictured above left) and was succeeded by Kenneth III the son of King Dubh.