King Kenneth II or Cinaeth MacMaelcoluim was the younger son of Malcolm I. He succeeded to the throne after the murder of his cousin Colin in 971. Kenneth was married to a Princess of Leinster whose name has not been recorded. He was not fully established as sole King until after he killed Amlaib, the brother of Colin. 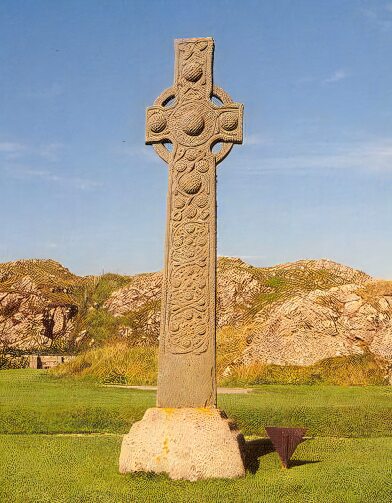 The King's attention turned to the province of Strathclyde, which he attacked in 972. This invasion, soon after the King's accession, was not undertaken totally in the hope of making territorial gains, but to indulge the mormaers, to fill their coffers and his own. These raids were an archaic relic of the cattle raids which a new Irish King would make to display that success and wealth would characterise his reign. Kenneth lost half of his army in the river Cornag.

Shortly after he attacked Eadulf, Earl of the northern half of Northumbria and ravaged the entire territory. The Scottish Chronicle records 'The Scots plundered Saxonia, as far as Stainmore and Cluian and Strangna Deranni' ( Derwentwater) Kenneth fortified the fords of the Forth as a means of protection against the Britons, before again ravaging Northumbria, this time carrying off Eddulf's son as his prisoner.

One of Kenneth's few better acts which has been recorded was the presentation of the city of Brechin to the church.

King Kenneth accepted English overlordship at Chester in 973, when he met King Edgar of Wessex, along with the princes of Strathclyde, Wales and Cumbria at a great council. Together they rowed the Saxon King down the River Dee. His homage to Edgar was rewarded with the gift of Lothian, consisting of all the land between the Forth and Tweed rivers. This is the first-ever mention of the River Tweed being the recognised border between England and Scotland.

Having made peace with the English, Kenneth turned his attention to the bloody and ongoing struggle between the mormaers of Speyside and the Danes. Throughout his reign, the mormaers were engaged in a contest for possession of Caithness with Sigurd the Norwegian, Earl of Orkney.

The King had been attempting to persuade the Scottish nobility that the succession of the Scottish throne should pass to his eldest son. According to the annals of Ulster, he was slain 'by the treachery of his own subjects.'

He was lured to the Castle of a noblewoman Finella, daughter of Cuncar, Mormaer of Moray, who had promised to reveal to him the names of traitors against his cause. Kenneth was entertained at a lavish feast at which the wine flowed freely after which he was treacherously murdered. His desire to secure the throne for his son, against the established tradition of the Scots, had probably hastened his end and faded on the accession of his distant cousin, Constantine III, which ensured the continuation of the bloody and ongoing feud over Scotland's throne.