Lady Agnes Randolph was the daughter of Thomas Randolph, 1st Earl of Moray, the nephew of Robert the Bruce and a hero of the Scottish Wars of independence who was named as Regent of Scotland after the death of the Bruce. Agnes' mother, Isabel Stewart, daughter of John Stewart of Bonkyll. Agnes married Patrick, the 9th Earl of Dunbar and March. She was as known as Black Agnes due to her dark hair, brown eyes, and sallow complexion. 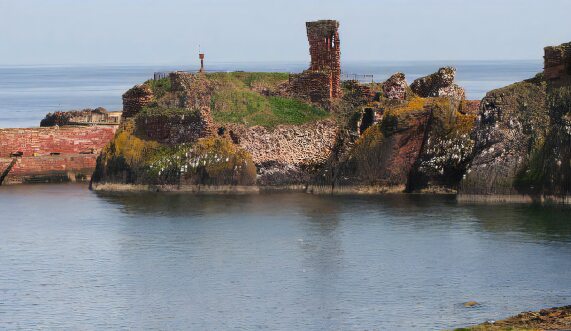 Agnes has gone down in history as the heroic defender of Dunbar Castle near the town of Berwick in East Lothian against an English attack led by William Montagu, 1st Earl of Salisbury.

This attack on formidable Dunbar Castle occured when Edward Balliol, who received the support of the the English, attempted to seize the crown of Scotland from David Bruce. Agnes' husband, Patrick Dunbar was absent fighting with the Scottish army when English forces launched an attack on his castle on 13 January 1338. Black Agnes was alone with only a retinue of servants and a few guards, but refused to surrender the castle, displaying great courage in the face of seemingly insurmountable odds.

The Earl of Salisbury commenced the siege with a bombardment by catapults, firing huge rocks and lead shot against the ramparts of Dunbar Castle. Lady Agnes, accompanied by her maids all dressed in their Sunday best, appeared on the outer walls, wherewith their handkerchiefs they dusted away the damage from the bombardment, thus exhibiting to Salisbury their lack of concern. She also taunted the English soldiers from the castle walls.

Montague launched a further assault, this time using a battering ram. Agnes had a huge boulder, fired during an earlier attack on the castle, dropped over the walls, smashing the English assault machinery. 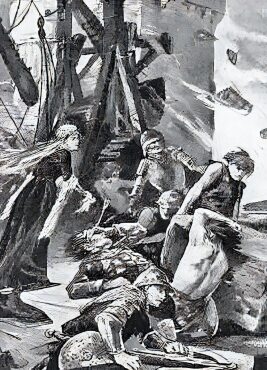 Agnes later sighted Salisbury riding around the castle with his second-in-command, she instructed one of her archers to kill them both. Salisbury was missed by an arrow and quickly rode out of range, however, one arrow pierced straight into the chest of his second in command and killed him outright. The Earl was heard to comment with sarcasm, "Black Agnes' love-shafts go straight to the heart!".

According to one version of the story, at one point during the siege, the English captured Agnes's brother John Randolph, the 3rd Earl of Moray, and paraded him in front of the castle with a rope around his neck, threatening to hang him if she did not surrender. She told them to go ahead, as she would then inherit the Earldom of Moray.

Alexander Ramsay heard news of Agnes's plight and with 40 Scottish troops, he marched to her aid, entering the castle under cover of darkness by the water entrance. The five months-long siege finally ended when Ramsay and his troops surprised the English troops by riding out the castle gate and attacking them. On June 10, 1338, William Montague ordered his army to withdraw, leaving Agnes in possession of Dunbar Castle.

Black Agnes is commemorated in a ballad which attributes these words to Montague:-

"She kept a stir in tower and trench,

Came I early, came I late,

I found Agnes at the gate."

Lady Agnes Randolph died childless in 1369 Her husband, Patrick, led the Scottish forces at the Battle of Durham in October 1346 and died just a few months after his wife.