John the Red Comyn, so known for his red hair, was the son of John Comyn, Lord of Badenoch, otherwise known as the Black Comyn, one of the Competitors for the Crown of Scotland, who based his claim on his descent from King Donald III of Scotland, his grandmother, Hextilda, who married Richard Comyn, was the daughter of Uchtred, Lord of Tynedale, and Bethoc, the daughter Donald III. John's mother was Eleanor Balliol, the eldest daughter of John I de Balliol and Margaret the parents of King John Balliol. Margaret was the daughter of David, Earl of Huntingdon, the grandson of King David I. The Red Comyn thereby combined two lines of royal descent, Gaelic and Norman.

Seal of the Guardians of Scotland 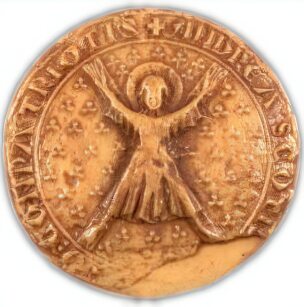 At the outset of the Scottish Wars of Independence, the Comyns were one of Scotland's most dominant families, with large landholdings and political influence and connections with the Scottish crown. The Comyn family were original of Norman-French descent and first arrived in Scotland during the reign of King David I. In the thirteenth century, they acquired the lordship of Badenoch, with extensive landholdings also in Lochaber, as well as the earldom of Buchan.

On the death of King Alexander III, Comyn's father was appointed as one of the panel of Guardians to await the arrival of Alexander's granddaughter and heir Margaret, Maid of Norway. The death of the young Margaret at Orkney in 1290 plunged Scotland into crisis, with no clear heir to the throne. John Balliol was appointed King of Scotland, with the support of his relations the Comyns, a solution that was never accepted by Robert Bruce of Annandale, grandfather of the future King Robert the Bruce. The Comyns were the principal supporters of King John Balliol even after he was deposed by Edward I in 1296. As such they were foremost among the enemies of the house of Bruce.

When war broke out with England and Scotland, the Red Comyn, his father, the Black Comyn and his cousin, John Comyn, Earl of Buchan attacked Carlisle, which was defended for King Edward I by Robert Bruce, Earl of Carrick, the father of the future king Robert I. As they possessed no siege equipment, the Comyns withdrew from Carlisle and joined up with the main Scottish host at Haddington, which had been assembled to meet the advance of the English army along the east coast. On 27 April the Scots were defeated at the Battle of Dunbar and John Comyn was taken prisoner by the English and imprisoned in the Tower of London.

Comyn remained Edward's prisoner for some months but was finally released on condition that he took up service with Edward in Flanders. While in Flanders he received news of the uprising of William Wallace and Andrew Moray and their victory over the English at the Battle of Stirling Bridge. In March 1298 Comyn deserted the English, and fled to Paris, where he appealed for aid to Philip IV of France, who provided a ship back to return to Scotland.

On 22 July 1298, Wallace was defeated by the English at the Battle of Falkirk. Comyn may have been present at the battle, possibly among the Scottish cavalry who deserted from the field of battle. William Wallace later resigned the Guardianship of Scotland and Comyn and Robert Bruce was appointed in his place. The traditional enmity between the Bruces and Comyn family's still burned brightly and at a meeting at Peebles in August 1299 an argument erupted, during which Comyn was reported to have seized the Bruce by the throat. A chronicler relates John Comyn "leapt on Robert Bruce, Earl of Carrick, and took him by the throat," and that Comyn's uncle, John, Earl of Buchan leapt on William Lamberton, Bishop of St. Andrews, "and they held them fast until the Steward and others went and stopped the scuffle." William Lamberton, Bishop of St Andrews, was appointed as a third Guardian in 1299 to act as mediator. 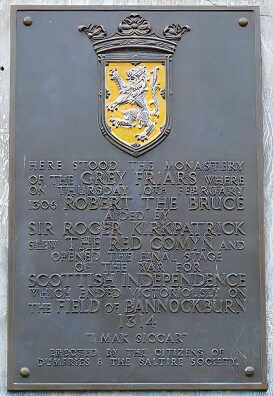 Robert the Bruce resigned from the the position of Guardian in May 1300, the following May John Balliol appointed John de Soules in his place, de Soles left for France in 1302, when the Red Comyn was appointed sole Guardian. Along with Sir Simon Fraser, he defeated an English army at the Battle of Roslin in February 1303. After which, Edward I, having made peace with France prepared for the largest invasion of Scotland since 1296. Comyn negotiated a peace treaty with Edward in February 1304, in which William Wallace was declared a wanted man. When Robert the Bruce's father died in 1304, he made a pact with John Comyn the Red, the nephew of John Balliol, about the succession to Scotland's throne. Comyn proceeded to betray Bruce, by informing the English King of their secret plans, as a result of which, Bruce narrowly escaped capture by the English.

By 1306 sole Guardian of Scotland was William Lamberton, Bishop of St Andrews. Robert the Bruce held long-cherished ambitions to become king, and entered into an agreement with Lamberton and Robert Wishart, Bishop of Glasgow, that Scotland's monarchy would be restored, by this time there were only two candidates for the position of King of Scotland, Robert the Bruce and the John, the Red Comyn.

Bruce and Comyn met to discuss their differences on 10 February 1306 at the Church of the Grey Friars in Dumfries, leaving their swords outside the church. An argument between the pair ensued and Bruce drew his dagger in anger and stabbed Comyn in front of the high altar of the church. He then fled the church, telling his followers outside what had occurred. Sir Roger Kirkpatrick went back inside and finished off the seriously wounded Comyn and also slew his uncle, Sir Robert Comyn, who tried to save him. A letter from the English court to the Pope stated -

'Bruce rose against King Edward as a traitor and murdered Sir John Comyn, Lord of Badenoch, in the church of the Friars Minor in the town of Dumfries, at the high altar, because John would not assent to the treason which Bruce planned... to resume war.. and make himself king of Scotland.'

It is unlikely that Bruce had gone to the meeting with the intention of murdering Comyn in a church. However, the deed was done and there was no going back. He proceeded to attack the strongholds of the Comyns in Southern Scotland. The Bruce confessed his crime to his supporter, Robert Wishart, Bishop of Glasgow, and received absolution, on condition that as King he would be respectful of the church, he was, nonetheless, later excommunicated by the Pope for the act.

On 25 March 1306, Robert the Bruce, was crowned Robert I, King of Scots at Scone. John the Red Comyn's only son died at the Battle of Bannockburn, whilst fighting on the English side.

Edward I of England