Isabella of Mar, first wife of Robert the Bruce, was born circa 1277, at Kildrummy Castle, Kildrummy, Aberdeenshire, she was the daughter of Donald, or Domhnall, Earl of MacDonald, Earl of Mar and Ellen or Helen ferch Llywelyn (1246-1295), who was the illegitimate daughter of Prince Llywelyn the Great of Gwynedd and the widow of Mormaer Maol Choluim II, Earl of Fife.

Robert the Bruce and Isabella of Mar 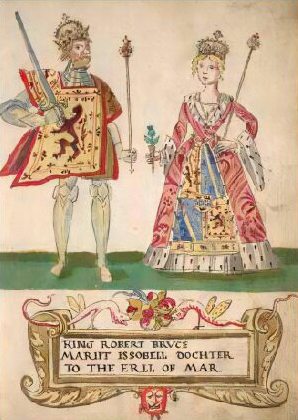 Isabella's father Mar was one of the seven guardians of Scotland, who after the death of Alexander III's heir, Margaret, 'Maid of Norway' believed that Robert the Bruce, Earl of Carrick, should be king of Scotland.

Embarking on a risky strategy, Mar nevertheless saw the advantages of allying his family with the Bruces and the possibility of his daughter's heirs inheriting the throne. He arranged the marriage of his eighteen-year-old daughter Isabella, heiress to a large section of northeastern Inverness, to the Bruce. Isabella was well educated and was said to have spoken both English and Scots Gaelic. Unusually for the time, legend states that the couple were very much in love. The Earl of Mar was the first to sign over the estates of his family to the Bruce.

Isabella quickly became pregnant after her marriage to Robert. Although she experienced a healthy pregnancy, she died at the age of nineteen, at Castle Cardross, on the Firth of Clyde on December 12, 1296, soon after giving birth to a daughter, Marjorie Bruce, named in honour of the Bruce's mother, Marjorie of Carrick. Isabella is reputed to have been buried at Paisley Abbey in Renfrewshire.

Six years later, Robert the Bruce married for a second time to Elizabeth de Burgh, the daughter of Richard Óg de Burgh, 2nd Earl of Ulster, and Margarite de Burgh and went on to win the throne of Scotland.

Isabella's daughter Marjorie, after along captivity in England, married Walter Stewart, 6th High Steward of Scotland, but died in 1316, like her mother, after childbirth, giving birth to a son Robert Stewart, the future King Robert II of Scotland.