After the death of King Indulf, in battle against the Vikings, Scotland's throne, in accordance with the tanist system, then reverted to his cousin Dubh mac Mael Coluim, or Duff, nicknamed Dï¿½n, "the Vehement" and Niger, "the Black'. He was the son of Malcolm I. 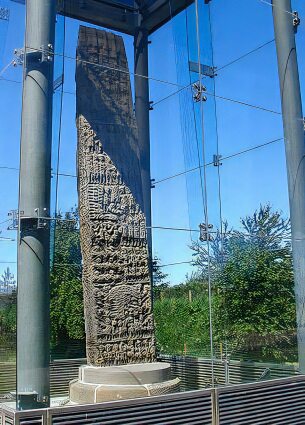 Little is known about King Dubh other than he managed to hold the throne for four and a half years. Fordun records of him 'A man of dove-like simplicity, yet the terror of rebels, thieves and robbers'.

Colin or Culein, the son of Indulf, fought to regain his father's throne. Dubh met him in battle at Duncrab and was victorious. Colin's partisans, Doncha, Abbot of Dunkeld (supposed to be an ancestor of Crínán of Dunkeld) and Dubhou, Mormaer of Athol was slain on the battlefield.

King Dubh was seized by a strange malady, against which his physicians were seemingly powerless and accordingly put their failure to cure the king down to the casting of spells by witches. The administration of justice in Scotland suffered as a result of the King's incapacity. Dubh eventually made a recovery and embarked on progress through Ross and Moray-both hotbeds of rebellion. Rebels against the crown were rounded up and executed. Some of these were relatives of the governor of the province and his wife, Dubh refused their pleas for mercy. The pair waited for their chance for revenge.

On a journey south in 967, Dubh spent the night at Forres, while attempting to raise an army. The King was kidnapped at nightfall by men acting for his enemies in the province and his cousin Colin. His body was found the following day covered in turf in a ditch at Kinross. It was exhumed and later carried to Iona Abbey.

It has been suggested that Sueno's Stone, near Forres, the largest surviving Pictish stone of its type in Scotland, maybe a monument to Dub, erected by his brother Kenneth II (Crínán mac Maï¿½l Coluim). The Picto-Scottish standing stone is over 6.5 metres (about 21 feet) high, with typical Pictish style interwoven vine symbols on the edge panels and stands on the north-easterly edge of Forres. The western face has a carved Celtic cross with elaborately interlaced decoration and a badly weathered scene set in a panel below the cross. The east face has four panels that show a large battle scene. The stone was encased in armoured glass in the early 1990s to prevent further erosion.