The fifteen-year-old Edwy, or Eadwig, the eldest son of the former King Edmund the Elder and St. Elgiva of Shaftesbury succeeded his uncle Edred to the throne of England in the year 955. Edwy was reputed to be an extremely good-looking youth and is remembered for preferring the charms of the fair lady Elgifu's bedroom to his seat in the council chamber. St. Dunstan, angered by the King's neglect of duty, dragged him back. Edwy was never to forgive this assault on his royal dignity and thereafter detested Dunstan. 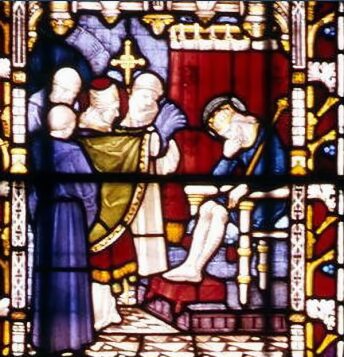 Edwy later married Elfgifu, who was a descendant of Ethelred I and the sister of Ethelweard the Chronicler, but it seems that his attraction for the lady only lead him into more trouble, she was said to be the daughter of his former mistress and stepmother, Ethelgiva.

The marriage was considered uncanonical by the church and he was made to banish her from the court by Archbishop Odo who imposed this separation on the couple on the grounds that they were too closely related. Ethelweard the Chronicler described himself as the "grandson's grandson" of King Ethelred I, who was the older brother of Alfred the Great. Edwy was the great-grandson of King Alfred the Great. Edwy and Elfgifu were therefore third cousins once removed. The Church at the time regarded any union within nine degrees of consanguinity as incestuous. 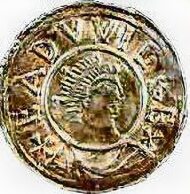 The fires of the King's active dislike for Dunstan were fuelled by the vindictive Elgifu. Dunstan retired to his cloister, but the monk's abbey was plundered by the King's forces. Dunstan fled for his life, though hotly pursued, he managed to reach the continent where he took up residence at a monastery at Ghent, wisely remaining there for the rest of Edwy's short reign. This naturally did not endear Edwy to the church.

Edwy, never a particularly pleasant character, was rash and profligate. The King shamefully stripped his grandmother, Edgiva, (the widow of King Edward the Elder ) of all her possessions and seems to have made himself further unpopular by enforcing unpopular high taxes and displaying a preference for Wessex over the other provinces he ruled.

Judging from the large number of charters granted in his reign, Edwy appears to have been lavish in the granting of privileges.

The Mercians and Northumbrians, frustrated at Edwy's policies, rose in rebellion. The rebels were led by his brother Edgar and Archbishop Odo of Canterbury, to whom the King had displayed an active dislike. Edwy met them at Gloucester but was defeated and forced to flee. Elgiva was branded and tortured, badly scaring her face, she died shortly after. A meeting was arranged by the men of Kent and Wessex, to sue for peace. In the ensuing negotiations, the Witan forced Edwy to accept his brother, Edgar as King of all the area north of the Thames.

Edwy died young in unknown circumstances on 1st October, 959, after only a four-year reign, he was possibly murdered. Edwy was never particularly popular was not greatly mourned by his subjects.

The Mortuary chests in Winchester Cathedral purport to contain his bones. Scientists from Bristol University now plan to examine the skeletal remains of the Saxon kings Edred, Egbert and Ethelwulf. The chests have been placed in the Lady Chapel of the cathedral to allow examinations to be carried out without removing them from consecrated ground. A Heritage Lottery Fund grant has been applied to finance the project. Experts from Bristol University will use the DNA techniques, team leader Professor Mark Horton has stated 'The preliminary findings are very exciting.'