legendary leaders of the Anglo-Saxon invaders

Hengist (also spelled Hengest) and Horsa (Hors), the legendary leaders of the first Anglo-Saxon invaders of Britain arrived as mercenaries to fight the Picts and Scots at the invitation of the Celtic British King Vortigern.

They were pagan Jutish warriors, the sons of a chieftain, Wictgils, the son of Witta. The Jutes or Iutæ as they were otherwise known, inhabited part of the North Frisian coast and the northern part of Jutland, a large peninsula that juts out from Northern Europe toward Scandinavia, forming the mainland portion of Denmark. It is possible that the Jutes are a related people to the Geats.

Kent in the time of Hengist and Horsa 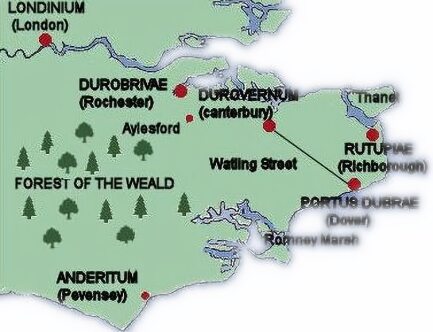 Hengist and Horsa landed in Britain at "Wippidsfleet" (Ebbsfleet) in 449 A.D. King Vortigern granted the brothers the Isle of Thanet in East Kent, assuming that that once they had received payment for vanquishing his enemies they would return to Jutland.

In his 'On the Ruin and Conquest of Britain', the sixth century chronicler Gildas informs us that Vortigern invited "the fierce and impious Saxons" to settle in Britain. Gildas goes on to inform us that a small group of Saxons arrived first and settled on the eastern side of England, the Saxon mercaneries were successful in driving out the Picts and Scots, but invited more of their countrymen. The Saxons later demanded that "their monthly allotments" be increased and, when they were eventually refused, plundered the lands of the Celts. Gildas implies that either he or his source obtained at least part of the story from the Anglo-Saxons.

Geoffrey of Monmouth states that Vortigern married Hengist's daughter, the Saxon Rowena, after which his son Vortimer, rebelled against him. According to the Historia Brittonum, attributed to a Nennius, a monk from Bangor, in Gwynedd, and probably compiled during the early ninth century:-

The rebellion came to an end on the death of Vortimer and the massacre of many of the British, Horsa, co-leader of the Saxons was also killed in battle, as was Categirn, another son of Vortigern. Vortimer was claimed to have been poisoned by his step-mother, Rowena.

The remaining Saxon leader, Hengist, called for a peace conference, which took place on Salisbury Plain. In an event known as 'the Night of the Long Knives', on their arrival the Celts were treacherously massacred:- '

And Hengistus ordered the whole of his household that each one should hide his knife under his foot in the middle of his shoe. 'And when I shall call out to you and say "Eu nimet saxas" ( draw your swords!), then draw your knives from the soles of your shoes, and fall upon them, and stand strongly against them. And do not kill their king, but seize him for the sake of my daughter whom I gave to him in matrimony, because it is better for us that he should be ransomed from our hands.' And they brought together the conference, and the Saxons, speaking in a friendly way, meanwhile were thinking in a wolvish way, and sociably they sat down man beside man. Hengistus, as he had said, spoke out, and all the three hundred elders of King Vortigern were slaughtered, and only he was imprisoned, and was chained, and he gave to them many regions for the ransom of his soul, that is Est Saxum, Sut saxum , Middelseaxan, with other districts under his control which they named.' 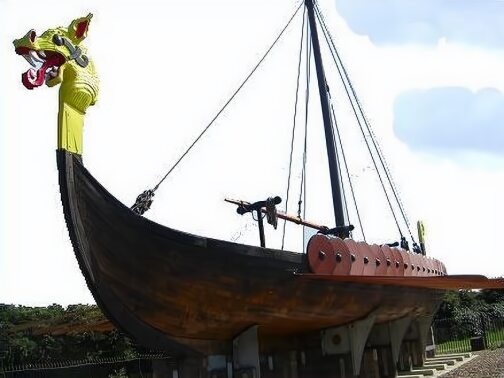 The Anglo-Saxon Chronicle, compiled in the reign of King Alfred the Great (871-899), mentions dates and locations of four battles that Hengist and Horsa fought against the Celts in Kent. It records Vortigern as the leader of the Celts in only the first battle. No Saxon defeat is acknowledged in the chronicle, although the geographical sequence of the battles certainly suggests a Saxon retreat.

It locates the last battle, dated 465 in Wippedsfleot, as the place where the Saxons first landed, which is thought to be Ebbsfleet near Ramsgate. 455 is the last date when Vortigern is mentioned in the Anglo-Saxon Chronicle. According to Gildas, Vortigern, sought refuge in Wales.

Following the death of Horsa, the surviving brother Hengist ruled as King of Kent . He reigned for 33 years and died in 488. He was succeeded by his son, Oeric Oisc. The kings of Kent, known as Oiscingas traced their descent to Hengist through Oisc, who was eventually succeeded by his son Octa.

A Hengest appears in the surviving accounts of the legendary Battle of Finnburg: the Finnesburg Fragment and a lay embedded in the epic Beowulf.

Following Britain's aid to Denmark during the Second World War, in 1949 Prince Georg of Denmark visited Ramsgate, in Kent, to dedicate the longship Hugin in commemoration of the landing of Hengest and Horsa at Ebbsfleet 1,500 years previously.