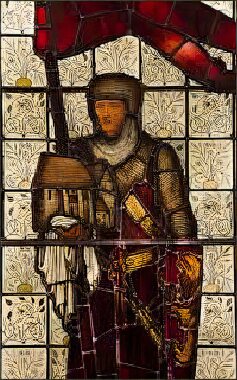 Henry Earl of Huntingdon David's father died in 1152 and his eldest son became King of Scots as Malcolm IV in 1153. David was knighted by his second cousin, Henry II of England on 31 May 1170. Shortly after William the Lion was released from imprisonment in England in 1174, he created his brother Earl of Lennox and granted him the district of Garioch, in Aberdeen.

Sent as a hostage to the English court in July 1163, he returned to Scotland as heir apparent to William the Lion immediately after he succeeded his older brother Malcolm IV in 1165. The Earldom of Huntingdon, which had been confiscated in 1174, was restored to William the Lion in March 1185. With the approval of Henry II it was transferred to David. David carried one of the three swords at the Coronation of Richard the Lionheart on 3 September 1189. He later accompanied King Richard on the third crusade to the Holy Land. Along with his brother-in-law, Ranulph Earl of Chester, he besieged Nottingham Castle in 1194, when it was held by followers of Richard's rebellious brother John.

Although he was unquestionably loyal to Richard, David's relations with his successor King John were often strained and in August 1212 John began to suspect that David with conspiring, along with other barons, to kill him. David was forced to surrender his chief English residence, Fotheringhay Castle.

(1) Margaret of Huntingdon (c. 1194 - c. 1228), married Alan, Lord of Galloway, by whom she had two daughters, including Dervorguilla of Galloway the mother of King John Balliol. 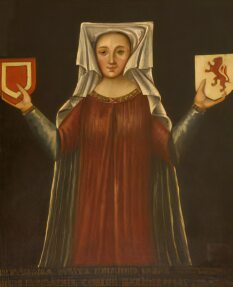 William the Lion died, old and senile on 12th December 1214 at Stirling Castle. Advancing years and illness marked the decline of David's political influence, his frailty was remarked on when, at the age of sixty-two, he attended the inauguration banquet of his nephew Alexander II in December 1214. David, Earl of Huntingdon died on 17 June 1219 at Yardley Hastings, Northamptonshire and was buried in Sawtry Abbey, Huntingdonshire.

Following the death of William the Lion's great-great grandaughter, Margaret 'the Maid of Norway' in Orkney in 1290, the senior line of the Scottish royal house became extinct and David's descendants were the prime candidates for the throne. The two most notable claimants to the crown, Robert Bruce, 5th Lord of Annandale (the grandfather of King Robert I of Scotland) and John Balliol, later King John, were both David's descendants through his daughters Isobel and Margaret respectively, another candidate for the throne John Hastings, 1st Baron Hastings, was the son of Henry de Hastings, son of Ada, third daughter of David. King Edward I, decided on the issue on November 17, 1292, in favour of John Balliol.