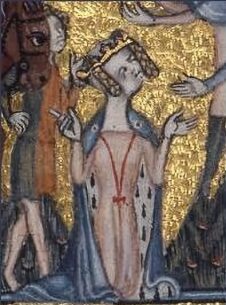 The de Bohun family, Earls of Hereford, were of Norman origin and came to England from Bohun in the Cotentin in Western Normandy with William the Conqueror. One Humphrey cum Barba (with the Beard), his beard distinguished him from other Norman knights of the period because they habitually shaved. Humphrey is said to be a kinsman of William the Conqueror, and according to the chronicles of Wace fought at the Battle of Hastings. He married three times, leaving four sons, Robert, Humphrey, Richard, and Enguerran, through his son Humphrey he became the progenitor of the Bohun family. Mary's paternal grandmother, Elizabeth of Rhuddlan was the eighth and youngest daughter of King Edward I.

Mary's maternal grandmother, Eleanor of Lancaster was the fifth daughter of Henry, 3rd Earl of Lancaster, himself the grandson of Henry III. Mary also descended from the Welsh Prince Llywelyn the Great through her mother. Llywelyn's daughter, Gwladus Ddu (Gwladus the Dark) married Ralph Mortimer, their granddaughter Isabella Mortimer married John FitzAlan, 7th Earl of Arundel, and they, in turn, became the great grandparents of Mary's mother Joan Fitz Alan

Mary's father Humphrey de Bohun died on 16 January 1373 with no son to succeed him, his vast estates were divided between his two surviving daughters, Mary and Eleanor de Bohun, who were left as wards of Edward III. Eleanor who was the eldest of the sisters, married Thomas of Woodstock, 1st Duke of Gloucester, the youngest son of King Edward III and Phillipa of Hainault.

Thomas of Woodstock, not wishing to share his wife's substantial inheritance, encouraged Mary, then still a child, to take the veil and become a nun. However, his elder brother John of Gaunt, Duke of Lancaster, with the aid of Mary's mother, Joan, had the child abducted from a convent to be married to his young son, Henry of Bolingbroke ( circa 1366-1413), who was Mary's second cousin. The young couple were duly married on 27 July 1380, at Arundel Castle. At the time of her marriage, Mary was perhaps little more than twelve years old while the groom was around fourteen. Although the event strained the relationship between the two brothers, John's son Henry became earl of Hereford in right of his wife.

Mary remained with her mother after the wedding, to whom John of Gaunt made payments for her maintenance. Due to her youth, Gaunt had planned for the marriage between Mary and Henry to remain unconsummated until Mary had reached sixteen but the couple disobeyed his rule on the matter. Consequently, Mary became pregnant at fourteen, their firstborn child, a son, was born at Monmouth Castle in south-east Wales, but sadly lived only a few days. The couple went on to have 6 more children, including the future King Henry V, who was born when Mary was eighteen.

Mary de Bohun died at the age of around twenty five, at Peterborough Castle, giving birth to her last child, a daughter, Philippa. She was buried at the Church of St Mary de Castro in Leicester. 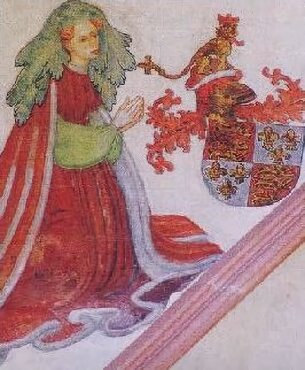 The children and grandchildren of Mary de Bohun and Henry IV

(i) Rupert of the Palatine.

Mary de Bohun died at Peterborough Castle, giving birth to her daughter, Philippa, she was around the age of 25 at her death. Mary was buried at the Church of St Mary de Castro, Leicester. After attaining the throne as Henry IV, her husband married for a second time to Joan of Navarre, the widow of John V of Britanny.

The Ancestry of Mary de Bohun

Paternal Great-grandmother: Elizabeth of Rhuddlan dau. of Edward I