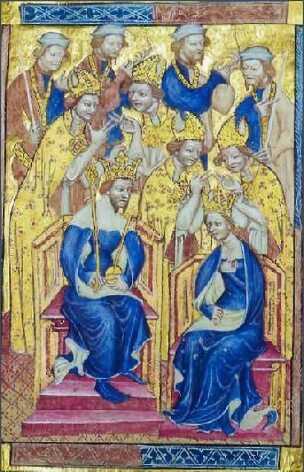 The marriage of Anne, who was the sister of King Wenceslas of Bohemia, to Richard II was negotiated by Richard's friend and favourite, Michael de la Pole, Earl of Suffolk and Richard's former tutor, Simon Burley and was partly due to the Great Schism in the Papacy, when for a time, Christendom had two rival popes. Anne's brother King Wenceslas chose to support pope Urban VI in Rome, whom the English also asupported. Pope Urban VI sanctioned the union of Richard and Anne in an attempt to form an alliance against the French and their preferred pope, Clement who lived at Avignon. Anne was not a popular choice of bride for Richard in the eyes of the the English nobility or members of parliament 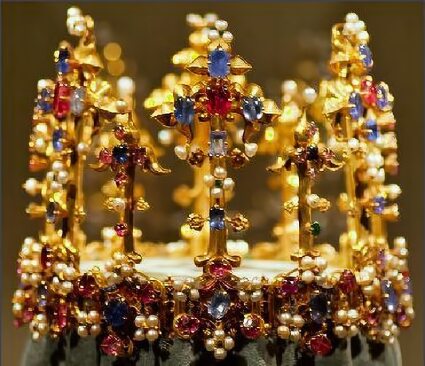 Although Richard had been offered Caterina Visconti, one of the daughters of Bernabò Visconti of Milan as an alternative bride, who would have brought a vast amount of money as her dowry, Anne was selected, although she brought no dowry, and in return for her hand in marriage, Richard gave 20,000 florins (around £4,000,000 in today's value) in payment to her brother Wenceslas. England acquired a few diplomatic benefits through the unpopular marriage, English merchants were allowed to trade freely within both Bohemian lands, and lands of the Holy Roman Empire.

Anne landed at Dover, in December 1381 and travelled to Canterbury, where she was received by Richard's uncle, Thomas, Duke of Gloucester, who was accompanied by a large retinue, she continued to Blackheath where she was greeted by the lord-mayor of London. On her arrival in England Anne met with much criticicism from contemporary chroniclers, the Westminster Chronicler called her "a tiny scrap of humanity", and Thomas Walsingham related a disastrous omen upon her arrival, where her ships had been smashed to pieces as soon as she had disembarked.

Regardless of such omens, Anne and King Richard were married in Westminster Abbey on 22 January 1382 and two days later Anne was crowned Queen of England. The young king appeared to be much pleased with his bride, and paid her every attention. Anne was sixteen at the time of her arrival in England and Richard a year younger. After a week spent in festivities and tournaments at Westminster, to celebrate their marriage, the royal couple travelled by river to Windsor Castle accompanied by the King's mother, Joan, Princess of Wales.

Although originally disliked, Anne seems to have became more popular in England with the passing of the years. Anne was described by a contemporary as a Godly, intelligent young girl with an inquiring mind, renowned for her love of reading and for her possession of the Scriptures in three languages. She was kind hearted and often exerted a good influence over her husband. She came to be liked by the people, who referred to her as 'Good Queen Anne', particularly the poor, to whom she acted with much kindness and generosity. 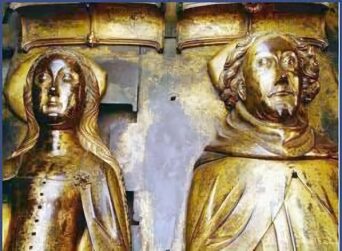 She often interceded on the behalf of others, procuring pardons for participants in the Peasants' Revolt of 1381 and similarly, she begged on her knees in front of Richard's political opponents for the life of Simon Burley during the 1388 Merciless Parliament. Anne also protected the religious reformer John Wycliffe from his enemies and intervened on many occasions to protect him from prosecution and to save his life. With Anne's encouragement, Bohemian students came to Oxford to study under Wycliffe. Many of these carried back the writings and teachings of Wycliffe to Prague, Bohemia and throughout central Europe.

Richard and Anne grew to become deeply in love, Richard was a devoted husband, in a letter to his mother-in-law, Elizabeth of Pomerania, he refers to her as "mater nostra carissima", which translates to 'mother of my beloved'. The couple were married for 12 years, but produced no children.


Tragically, his beloved Queen, Anne, died of the plague in 1394, aged but twenty-eight. Richard's grief was terrible, distraught and emotionally unstabilized, he had Sheen Palace, where Anne had died, razed to the ground. The Queen was buried at Westminster near to St. Edward's the Confessor's shrine. An embarrassing incident marred the funeral service, Richard was angered by Richard Fitzalan, Earl of Arundel, who had the audacity to arrive late. When he tactlessly asked the King to excuse his attendance, Richard completely lost control. In his passionate grief and fury he seized a wand from one of the vergers and struck Arundel so violently about the head with it that he fell to the ground dazed.

Two years later Richard married again, taking Isabella of Valois, the seven year old daughter of Charles VI of France, as his second wife. He treated her with great kindness and they were to become extremely fond of each other. Five years after Anne's death, Richard was deposed by his cousin Henry IV (1399) and probably murdered. His body was initially interred at King's Langley by his supplanter, however, on his accession to the throne, Henry V had Richard's remains moved be placed beside Anne's in to the elaborate tomb Richard had prepared at Westminster Abbey. Their joint tomb, now damaged, once showed them clasping hands.